So here we are six years after I last posted about this film. "National Lampoon's Animal House" really does qualify as a classic film, in spite of how rude, irreverent and sometimes crass it can be. There were other wild comedies of the seventies but "Animal House" introduced the off the wall sensibilities of John Landis, The National Lampoon Staff that included Harold Ramis, and of course John Belushi. All you "Ghostbusters" fans out there, if there was no "Animal House" there would have been no "Ghostbusters".

The cast of this film is also amazing when you look back on it. It was Kevin Bacon's first movie, Tim Matheson moved to the Big screen from TV roles, Tom Hulce is launched onto the movie going public and Karen Allen is just three years away from Raiders. The story I have heard is that Donald Sutherland turned down a piece of the backend in favor of s straight paycheck, and if he had taken a piece of the action he'd have made a hell of a lot more from the small part he played.

This is my daughter Amanda's favorite comedy, primarily because it embodied the Spirit of Troy Trojan Marching Band's attitude about how to enjoy college life. My memories of it are incredibly positive but it is not just a nostalgia trip to see it. The movie still kills in the laughter department. Belushi was not a silent star but more than half his role consisted of his physical comedy rather than dialogue. The movie is eminently quotable, and because it was set before it's time in the first place, it has aged very well.

Here is the Band doing the Theme from Animal House [by the way, written by pop singer Steven Bishop, who appears as the guitar playing Romeo at the Toga party]


Somewhere, Amanda is in there, this was her last year playing for the Spirit of Troy before she graduated.

The Film Screens again this coming Wednesday, Now Take that Pledge pin off your uniform, drop and give me twenty, and go see this on the big screen. 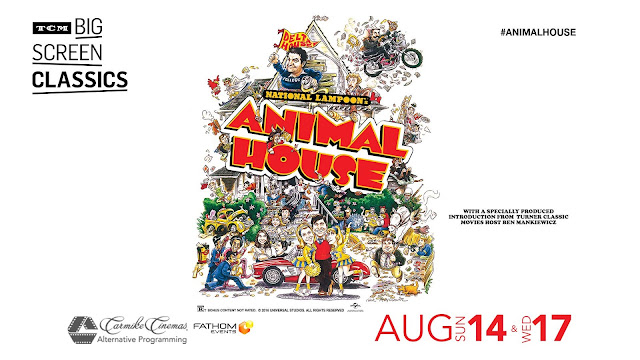 Posted by Richard Kirkham at 8:00 PM