Hillary's America: The Secret History of the Democratic Party


Dinesh D'Souza is a provocateur for conservatives in much the same way Michael Moore is for liberals (or progressives). He is also becoming quite the entertainer along with his sometimes polemical political point of view. This is his third film in four years, and while it does include the usual talking heads and edited footage of public news footage, he has inserted a number of things into this film that make it more cinematic than strictly propaganda piece. As a result, it seems his documentaries have been financially successful if not politically so [President Obama was Re-Elected despite a big splash from D'Souza's first film "2016: Obama's America".

I personally am dismayed by the choices we are offered by the major parties this November. Donald Trump is a reprehensible huckster who has no knowledge of how government works and has the rhetorical skills of a nine year old on the playground. If someone is willing to make a movie exploring this point of view, I am willing to see it and offer my thoughts on it. Right now, the shoe is on the other foot. Hillary Clinton, who is likely to be our next President, gets shellacked by D'Souza in this film, and it will leave a mark, regardless of her margin of victory. The level of perfidy is unmatched by any American political figure since Aaron Burr, and that includes Tricky Dick Nixon. The voters will probably elect her but it looks like no one trusts her, she has some of the highest unfavorability numbers of modern polling. Maybe that will make some of D'Souza's more outlandish arguments easier to swallow. The self destructive choice we have before us will be more difficult when anyone see's this film, it is for partisans, but it also has some solid documentation to go with it.

All arguments are based on choice. The argument this film makes involve which interpretation of events you choose to believe. The contrast between the two parties, from an historical perspective, is largely accurate. The twist comes in how the reversal of roles was achieved. The film maker has forceful opinions about that. One of the things that he does effectively is bring in side stories and events that illustrate the position he is taking. The story of Ida B. Wells is a good example, it carries his theme on historical facts but it is dramatized in a very interesting recreation of history. The segments with Andrew Jackson leering at his female slaves and coldly ordering fierce punishments is a bit cheesy. Many of those sequences however are written directly from the words of the people involved, so it makes the point feel more real.

The start of the movie features a couple of things that show that this is an entertainment. A piano playing character singing a political screed ala Garrison Keillor is a tip-off that it is OK for us to laugh occasionally. The graphics in the titles convey humor and look very professional, so the quality of the film is unlikely to be challenged on cinematic competence [I'm sure most of the criticism will be political]. Just as Michael Moore inserts himself into the films he makes, D'Souza is a character in his movies. Here, he actually has a pretty good story hook to go with the points he is making. Having been convicted of violating campaign finance laws, he is punished in a manner that seems from his perspective, disproportionate to his offense. He uses the time he spends doing community service and sleeping in a correctional facility each night, as a framing structure for his premise that the political forces of the Democratic Party are the equivalent to a street gang.

The goal of the movie is clearly to focus attention on the flaws that the writer/director sees in the Democratic party and their standard bearer this year. Most of the material is not particularly new but it is put together in a very effective way that could be persuasive to those who do not already have an opinion about the former Secretary of State. Her political opponents will cheer at the directness with which some of the claims are made and the use of first person testimony and tapes of Hillary's voice in regard to a rape case she handled years ago is damning.  The four part strategy of a criminal con plot, outlined by one of his fellow inmates, is most strongly demonstrated in the one point that says "deny, deny, deny". There are several examples of Hillary denying things that are later shown to be fundamentally true, but for which she continues to refuse responsibility for. Other segments require inferences that do not have the same degree of certainty to them. The viewers will be forced to accept his point, research the argument or ignore it entirely. You can see that if the first two are more likely results, D'Souza will consider his job accomplished.

If Donald Trump had any real political instinct, or sense of what works when it comes to campaigning, you'd think he would plagiarize the script of this movie and not the words of FLOTUS. There are at least three sections near the end of the film that would make strong campaign ads and might move voters away from her, although it probably will not drive them to him. I rarely hear him make an argument, I only hear claims and insults from his campaign. You might not like or agree with D'Souza [and I know many of my friends on line who read these posts won't], but at least he is making an argument.

The outcome of the election will depend on a policy choice you make; who should I vote for? This film supports the proposition that some one other than Hillary Clinton or any Democrat should be your choice. I can't say that the film will tip people in that direction for sure, but the secondary issues of fact and value are likely to be influential and that is at the heart of the movie. Let's face it, critics of Clinton will go to have their beliefs validated, and supporters of Clinton will stay away the movie to  avoid some cognitive dissonance. Here is the math: 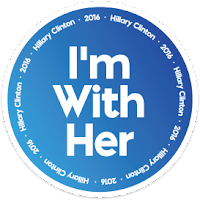 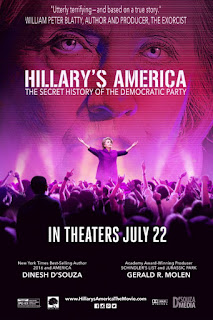 
Posted by Richard Kirkham at 2:01 PM