Here is a movie trailer that manages to sell the story without giving away the farm. The juxtaposition of moods is perfectly emblematic of what happens in the film, and the less you know, the more enjoyable the movie will be. I see reviews all the time when I read on-line where more than half the review simply retells the plot of the film. Sometimes that is necessary, because otherwise people won't understand why the movie is worth seeing or why it should be avoided. I have always attempted to keep that type of material to an absolute minimum on my posts because I don't want to spoil a movie for someone else, and frankly, repeating the story just bugs me, go see the movie if you need to know. This film is going to be a little challenging to write about because I don't want to give away anything at all.

If you too are worried about spoilers, don't read the next paragraph. It does not go into the plot but it does discuss something that most people seeing the film will have some knowledge of.

"10 Cloverfield Lane" is in fact a sequel of sorts to the found footage movie from 2008. That is eight long years ago, so a sequel might seem strange, but it is a different kind of a sequel, it is more a related story rather than a descendant. No characters reoccur in this piece but you will be able to see a direct relationship after the film has played out. There, that's as much as I will say about it.

This movie has several great scenes in it that will startle you and build some fantastic tension. More than ninety percent of what takes place is in a "locked room" scenario and there are basically no effects, visual trickery or CGI manipulation. This is a strange drama played out against a backdrop that remains ambiguous till the end of the film. There are basically three characters and how they interact, what they do and their relationship to each other is all what the movie is about. The reason this movie works so well is not really the premise, but the screenplay. The principle screenwriters are Josh Campbell, Matthew Stuecken and Damien Chazelle. That last name should have rung a bell for me, because he is the writer/director of my favorite film from two years ago, "Whiplash".  I'm sure that the first two deserve all kinds of credit for creating the situation and plot, but I'd be willing to bet that the tension laden scenes in the film were scripted by Chazelle, the building stress and the mental strain exhibited by the characters is so close to what was in that movie about a young ambitious drummer that I feel I should have been able to guess it.

Unlike the original "Cloverfield", this is not a found footage film, and it is not shot using a 'Go Pro' strapped to someones head. The director here had access to a tripod and used it. That does not mean that the film is static, but it does mean that it is not full of visual flourishes designed to wow bored audiences. Director Dan Trackenberg is trying to tell a story, and not build a portfolio for himself to submit when someone needs a big budget picture made. Maybe he will be able to pull that sort of film off, but if he ever gets the chance it will not be because he was a camera wizard here. It will be due to the fact that he knows how to pace a scene and show the actors and stage a moment. And as i said earlier, there are some really good moments here. 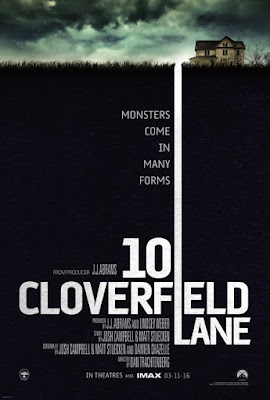 The cast has to get a huge amount of credit for the success of the film. John Goodman is an actor who works all of the time in so many different roles, that although he is easy to recognize, he is hard to classify. I found an appreciation of his efforts on another site that I read regularly and you might like to go there and see how versatile he really is (AndSoitBegins) . The truth is, he is well respected and has a long list of award nominated performances, mostly on TV. His film career is extensive and it really is a shame that he was not nominated for an Academy Award for supporting actor for "the Big Lebowski". This movie is in a genre that is not likely to change that but it should. He is terrific as Howard, either a savior or a lunatic, who drives the tautness of the film up the wall at times. Howard is more mundane than we might expect, but he has elements to his character that will give you the willies. Walking through the parking lot after the film, we stopped in the "Golden Spoon" yo get some frozen yogurt to take home. My daughter asked me if I wanted it in a bowl or a cone, mimicking a scene in the movie, and I actually shivered for a moment because Goodman makes that scene so real and foreboding. Like Goodman,  Mary Elizabeth Winstead is an actress known for both television and films. I noticed that she costarred with Kurt Russel in two films and did the remake/prequel to the Kurt Russel classic "The Thing", so maybe she has a thing for the grizzled old guys. This film really belongs to her. The emotional journey that takes place during the movie is all about her character. She grows and evolves as a person due to the experiences she goes through. There are some action scenes but more than anything it is the way she relates to her two co-stars that makes her performance memorable. The third actor in the piece is John Gallagher Jr., an actor that I don't know well but for whom this film could be a launching point for bigger things. He has two very effective moments in the movie and matches with Goodman and Winstead, minute by minute.

That's as much as I'm going to say about the film. If you have seen it, I'd love to engage in some conversation with you about it. Just don't give anything away because then I will have to wish you into the cornfield, and that won't go well.

Posted by Richard Kirkham at 3:34 PM

I agree that the cast really helps make the film as successful as it is. Winstead and Goodman are great, and the characterizations make things really interesting.

It seems like a lot of people didn't like the ending, but personally, I was okay with it.

With a set up like this and only three main actors, the performances have to be good. Thanks for coming by Zach.