58 Moments I've Loved from Movies I've seen in my Lifetime.

So I'm another year older today and I'd like to celebrate by giving you all a gift. This post has 58 links, moments, or videos that I've enjoyed over my lifetime. This is not a list of the best moments, or one from each year that I have been alive, but since I was born in 58 and am turning 58, it just seemed like a good number of items to share.  Hope you all find something to make your day a little brighter, be careful, thar be spoilers in some of them posts.


1. The Opening Narrative and Pictures From Disney's Beauty and the Beast


"For who could ever learn to love a beast?"

2. Jackie Chan in Rumble in the Bronx


Jackie Chan is an artist in his field. I actually choked up when watching this movie because he is to martial arts what Fred Astaire was to dancing.


If you ever wondered how Elsa could have ended up with Victor Laszlo.


John Williams Kicks Ass, Computer generated titles like we have never seen before and a nostalgic hook with a real movie screen curtain.


The passion at that moment he sees Ann and tries to convince her to go with his crew to a far off place, that would have been enough for me to go to. "It's money and adventure and fame!"


Rocky Balboa is a great character and the power of the image combined with the story amps us up for the last act.

7. Robin of Locksley swaggers into the enemies lair and throws down the gauntlet.


Errol Flynn owned this role on the day he was born. My favorite film, and this may be my favorite scene. The by play with Robin and Prince John is priceless. 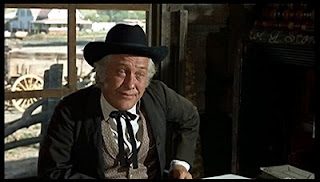 9. The Final Shot of Planet of the Apes

If ever there was a kick in the face, this was it. I was ten and it left a mark. What a movie!


Real honor chosen over slavery. If only we could all be so bold.


Anybody with a Mother and everybody who loves animals, should be moved by this.


One of the reasons that Paul Williams is a National Treasure.

I also love the reprise finale.


Write your own ending.

13. The Long, Long shadows of "The Quick and the Dead"

It takes a long slow pan to reveal the first appearance of Ace Hanlon. 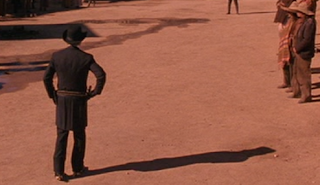 Herod stands in the center of the street for one of the gunfights. 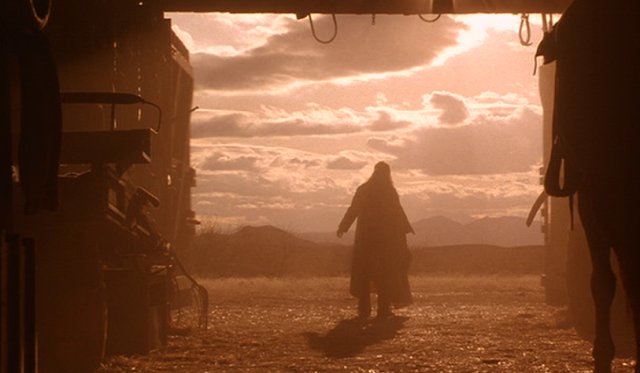 Elle casts a shadow as she gets ready to ride. 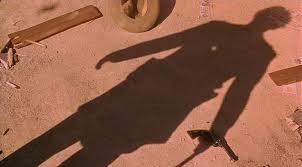 A silhouette provides the outcome of the final shootout.

Forgive the awful colorized version, and see the decency of a young man and the gratitude of a desperate and devastated old man. One of a dozen heartrending moments from this great film.

15. The Last Scene in the Maltese Falcon

The ending is not always happy. Lesson Learned.


The finale of a movie lover's dream.


17. Proof that Orson Wells didn't blow his wad with Kane

Crane shots will be a dime a dozen from here on out, but they won't match this.


Another one from when I was ten. This tone poem frightens and builds anticipation and you know something significant is about to happen.

19. The Teaser Trailer for The Rocketeer

This promo was on Disney product, but I know I saw it in a theater, I remembered the staccato letter punch. I wanted to see this movie immediately.


Here is a single Image From a movie that made me want to see it.  These two actresses in a road movie with guns, oh yea, I'm in.


Comically brilliant and horrifying at the same time. Bruce Campbell, you're my hero.


22. Holy Crimeny , That Son of a Bitch Shot John Wayne!!  The Cowboys


I was learning the hard way that the good guys don't always make it to the last reel.


Irony, thy name is geek.  When he said those words, I knew right then why it was called "Nightmare" Alley.

24. Speaking of Alleys, This Parody Trailer From Tropic Thunder is perfect.


The looks they exchange, the fumbling with the rosary beads, and then the title...I laughed out loud for five minutes. It's the back alley of love.


As a kid it was scary, as an adult, it is just too cool.


I dressed as Dracula for Halloween at least three times as a kid.


Bill Conti's theme inspires every time. First Rocky and then this.


Have you ever watched the show? Sam Rockwell is funny in every scene of this film.


The language on this is dubious, so don't play it at work. The character of Wheeler explains to his Sturdy Wings Little, the concept behind the band.

This combines two of my favorite things, movies and KISS.


I try to see this in a theater whenever I can.

32. Albert Brooks and Rip Torn in in Defending Your Life

If you have never seen this movie, put it in your queue and get ready to laugh and cry.

33. Baptism by Fire, The Godfather


In the biggest act of hypocrisy ever filmed, Michael Corleone stands Godfather to his nephew, being baptized in a church and renouncing Satan as his button men scour the country and eliminate all of his enemies in one fell swoop.   Brilliant Film making.

I looked for a clip of DeNiro stalking Fanucci in Godfather 2, I'd add that one if I'd found it.


Walt is said to have had this as his favorite song in Mary Poppins. It is a sentimental moment that I too love.


The master of the "F" word gets a chance to make it a highlight of a film.

36. The Moment before the Famous Shower Scene


Everyone knows the murder of Marion Crane in the shower is one of the most amazing scenes in films. From an acting perspective however, the sequence right before that is amazing. Anthony Perkins and Janet Leigh are professionals at the top of their game in this three minutes.

Notes from a recent visit here.


37. The Death of Spock in Wrath of Khan


As a long time fan of Star Trek, this was a moment that ripped me apart.

38. You want to be creeped out? Watch Anthony Hopkins rule the film from a cage.


39.  The Toughest Mother you will ever need. Ripley


40. Christopher Walken in almost anything.


He might only be in a film for a few scenes, or he may be the star. Whichever it is, he is almost always the most compelling thing on the screen. Here is a short clip from Man on Fire, watch him lick his fingers and ominously describe what is to come.


41.  The Opening Sequence in Once Upon a Time in the West


The sound design, composition and stoic slow paced acting by the performers here is a perfect film in itself.

This whole scene deserves to be written about repeatedly.

I've only written one fan letter in my life. It was to Jerry Goldsmith after hearing the music from Gremlins. Comical, fun, scary and sweet all at once. A great match for the tone of the film.


43. The Best Improvised Scene Ever


Robert Shaw puts everyone else to shame when he dominates the screen.


Raisuli: To Theodore Roosevelt - you are like the Wind and I like the Lion. You form the Tempest. The sand stings my eyes and the Ground is parched. I roar in defiance but you do not hear. But between us there is a difference. I, like the lion, must remain in my place. While you like the wind will never know yours. - Mulay Hamid El Raisuli, Lord of the Riff, Sultan to the Berbers, Last of the Barbary Pirates.

46. The Greatest Special Effects from a Horror Film Ever


John Carpenter knows how to freak people out.


The late Alan Rickman steps into the movies with an Iconic villain role.


The dialogue is where it's at in his films. I love a good argument. Watch the language folks.


You could use Henry the Fifth's St. Crispin's Day Speech or William Wallace from Braveheart. It all inspires.

50. If it's Worth Dying for It's Worth Living For


The climax of a great morality tale.

51. Judy Garland will Break your Heart

52. My Favorite Song From Aladdin


Robin Williams can rest easy, he gave us this and made the world better.

53. A Jester Unemployed is No Body's Fool


I debated between this scene and Kurt Russell as Wyatt Earp kicking Billy Bob Thornton out of the Casino. Either provides a moment of Western Bliss.


55. Every Gunbarrel Sequence in a James Bond Movie.


You can review my 007 Countdowns to see what my favorite Bond Films are, but at the start of the movie, when this comes on. That is my current favorite.


Acting, editing and music combined to bring emotions into our hearts that are so often left at the concert hall and not felt in a movie theater.

57. I have to Watch Every Time, because Next time he might make it.

58. Because I hate it When A Bank Robbery Interrupts My Lunch

The first movie I remember quoting lines from.


That's it for this birthday. Hope you all enjoyed 58 shades of Richard. Be sure to come back for more.

Posted by Richard Kirkham at 12:30 AM

I am not ashamed to say that the ending of Cinema Paradiso brings me to tears. It's absolutely perfect.

It is so sentimental, that's probably why it is the only Foreign film on the list, I'm a sentimentalist.

I enjoyed reading these - so many great moments. I recently rewatched Superman I and II (Donner versions) I still listen to that John Williams soundtrack at least once a week. Man, when those credits roll, I get more emotional each time.

There are a dozen John Williams tunes that could make the list, but that Superman theme is just so evocative, it's the one I had to pick. Thanks Eric.

Oh my, what a great list!! Happy belated birthday Richard. You won me over already w/ the first one on the list, I LOVE Beauty & The Beast's prologue, it's so heart-wrenching and beautifully-narrated… "For who could ever learn to love a beast?" That makes me shudder every time.

Glad you made it by Ruth. That opening narration from Beauty and the Beast rips my heart every time.