There may be films that deserve their box office fate. I have yet to see "Pride and Prejudice and Zombies" so I can't say it does not earn it's economic failure. I can say I've seen a number of films over the years that should have been more successful and popular than they turned out to be. Unfortunately, this film looks like it will fall into that second category; an excellent film that will not connect with the audience for some reason. It is difficult for me to fathom why that is the case, since it features a young popular actor in the lead, terrific special effects, and a dramatic story that is worth telling. Maybe the January release date or the sobering real life drama are scaring people awy. Or maybe we have finally gotten to the point where adult films don't draw anyone in if they don't feature blood, sex, violence and language that would put an old time sailor to shame.

The Coast Guard is a misunderstood and sometimes overlooked part of our military, but their action contribute on a daily basis to our security and even more important to safety on the seas. This is a true story about the efforts of a small Coast Guard crew, in an undersized boat, fighting the elements to save a large group of men in a maritime disaster. I have always appreciated when movies show competent people doing their jobs and managing to make the world better. The engineers at NASA are a good example but so are the teachers in our schools and the hospital staffs that try to help us. They are not always perfect, but when everyone does their best, then the results are rewarding, That's really what this film is about. Not just the Coast Guard crew but the men who survived the break up of their ship in hurricane like conditions, but managed to give themselves enough time to allow help to arrive.

As old fashioned as a salute to the flag or a boy scout troop, "The Finest Hours" is very straightforward in it's story telling. There is a small back story about the man who led the rescue and his future bride, and hints of a failed previous rescue,but other than that the movie sticks to a straight narrative of the events, following the Coast Guard process and in a parallel narrative, the efforts of the crew of the Pendelton, the sinking ship, to save themselves. There is not an ironic view of the events, or any social commentary offered, it is simply a rescue story, well told both visually and in the narrative. Certainly some events may have been enhanced for the film but nothing untoward happens from a cinematic perspective. Maybe modern audience won't get chocked up by the way the sailors volunteered for what is essentially a suicide mission, but I know I did. These men signed up for the purpose of making a difference and they did not shirk their responsibility, even when it was a threat to their survival.

Chris Pine plays Bernie Webster, (at one time described as a bosom's mate. I don't know the ranks well enough to say, but he captains the rescue boat. Pine in the early scenes is portrayed as an uncertain innocent. He even has to have his girlfriend ask him to marry him. He does not seem like the decision making leader, but rather a stalwart man, capable of doing a job, but reluctant to assert himself. The post war setting in Massachusetts looked very authentic to me. The women wore dresses and the men wore collared shirts and they dance and drive like real people, not like the cartoon caricatures of people we see in movies today. Casey Afflect plays the chief engineer of the broken tanker and he is equally quiet but needs to step up if the men on his ship are to survive. There was not a lot of melodrama in the ship side story, just the usual stress that a life threatening experience is likely to produce. The land based drama is a bit thicker but it never overwhelms the basic story. 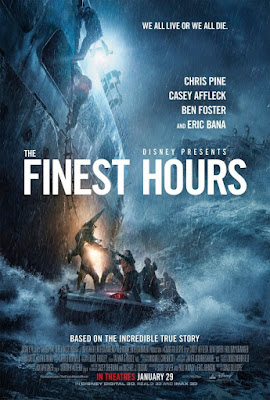 There are heroic moments and close calls and a number of lucky breaks depicted in the film. At one point it looked like Eric Bana's  Commander Cluff was going to be a bad guy in the story, instead he turns out to simply be the level headed military structure that the system depends on. He has to make tough choices and they are not always correct, but there was never any level of malevolence in those orders. Holliday Granger is the pretty girl that Pine leaves at home but serves as our surrogate for worry during the adventure. Everyone looks great in the period costumes and they all carry off those northeaster accents admirably. Ben Foster is a sturdy number two on the rescue boat, and he has become a very solid character actor, especially in these military based stories. Everyone was excellent, and I noticed that Carter Burwell did the music for this. He was able to better serve this film than the other weekend film I saw on which he also worked, yesterday's disappointing "Hail, Caesar!"  I would strongly recommend this film to all of you who don't mind an old fashioned drama, brought together by competent pros.

Posted by Richard Kirkham at 2:43 PM