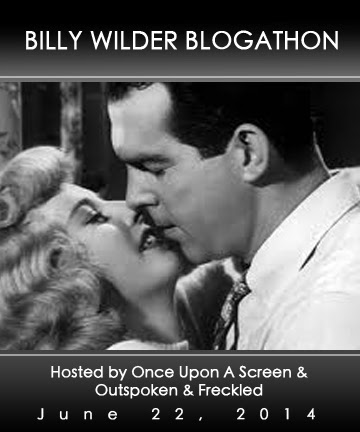 I'm stepping out of the format for this blog to participate in a blogathon for Once Upon a Screen. Aurora has invited us to post in any way we would like on a Billy Wilder film. I was lucky in that no one had yet selected Wilder's first Oscar winning project, "The Lost Weekend". Maybe the reason that it had not been chosen yet is that unlike "Double Indemnity" which came out the year before, "The Lost Weekend" has not aged well. It does not fit into a well loved genre like "Double Indemnity" and "Sunset Blvd.", it is not a beloved comedy featuring another Jack Lemmon performance, and it is as straight forward a drama as you might expect from any other film maker rather than Wilder. There are some very nice elements to it but it but it is also over the top and melodramatic and it sells out at the end, these are not characteristics of a Wilder film.

The previous film that Wilder wrote and directed was the film noir featuring Barbara Stanwyck and Fred MacMurray. At the end of that picture, both of the protagonists are dead and the film is bleak. In "The Lost Weekend" we are shown how miserable and devastating alcoholism can be. Ray Milland gets to act his ass off because there are sequences that are truly harrowing. When the end comes, and the gun is in his hand and the bullets are in the gun, Wilder pulls back and and gives us an exit from the bleakness. Maybe that's how the book that this is based on ends, I don't know, I never read it, but it sure feels like an ending that would come from studio notes rather than following naturally from what we spent the earlier hundred minutes contemplating.

Wilder appears to have chosen the book to make a movie out of because he wanted to work on the topic of alcoholism after having worked with Raymond Chandler on "Double Indemnity." Alcoholism is the subject of this film but it is not the vague drinking done by most film characters in the forties. Boogie drinks to forget Ingrid Bergman, that's sad but romantic. There is nothing vaguely romantic about the way Don Birnam drinks. He is compulsive and he is a mean drunk. He is not a genial soul who is released from his limitations by drink. The rye that he is fond of is cheap and it's purpose is intoxication and it releases a man with monstrous tendencies. When drunk, he ignores two different women who are flinging themselves at him. When lacking funds to pay for a drink he loses any sense of self respect, begging, stealing and generally being an ass to others. Sometimes he can wax poetic in a state of inebriation, but he can never remember how to put the word together again when he is sober. As a writer, the blank page mocks his lack of sober creativity.

The problem with the film is that it is so melodramatic. Don sweats out his time as he waits for the next drink. He visualizes singers on stage as dancing versions of the top coat he left in the cloakroom that has his bottle in it. He raises his voice and bugs out his eyes so often that you would think he would get sick from doing that, those facial gestures would become a cause rather than a symptom of his illness. Don has a girlfriend who is trying to help him and a brother who is an enabler at first and then a proponent of tough love. Each of them has over the top moments in which their acting styles seem unnatural. Part of this is the times. Actors were less naturalistic at this point and combined with the subject matter it feels like it is too much. There is almost no subtlety in any of the performances. 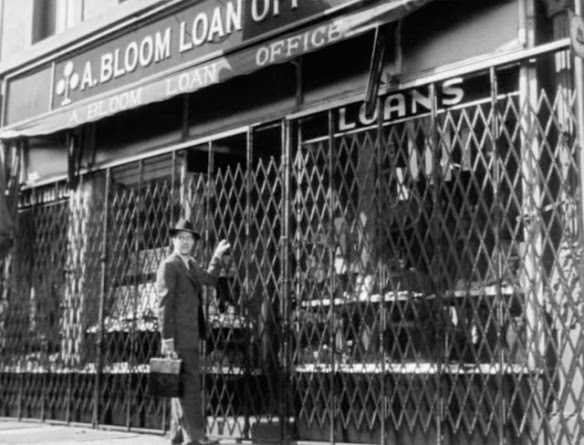 Milland practically crawls through the scenes where he is trying to find an open pawnbroker to dump his typewriter to get cash for another drink. Maybe it is accurate and for the times acceptable, but the fact that all the pawn shops were closed for Yom Kippur felt like an artifact from a different age. When he is reduced to "borrowing" from a woman's handbag, we are not sympathetic, we want this bum to get slammed hard. That he does get some comeuppance turns out to be another throwback. This is admittedly the first film to deal with this topic in a serious manner, and the idea of the DTs is scary. When trapped in the alcohol wing of Bellevue, Don gets a second hand look at what is coming for him. The screaming thrashing patient in the corner foreshadows but does so so obviously that it takes away some drama. When Don's turn finally shows up, it is a horrifying vision undercut by a creaky visual effect of a flying bat. When the bat strikes however, then the movie takes on the real dark tone it has been working so hard to deserve. 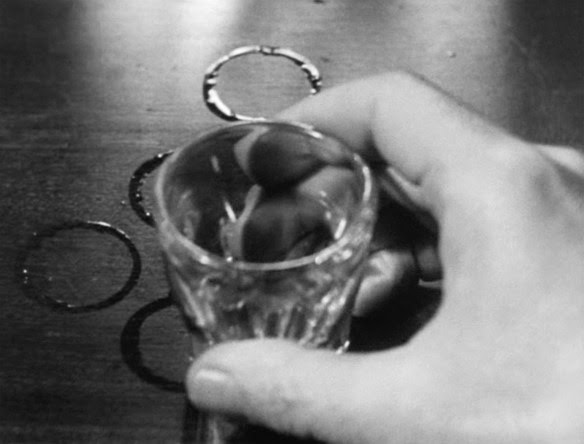 There are some great choices by Wilder in terms of storytelling technique. The tight close up on the moisture rings from his different drinks shows us the passage of time without requiring more than a single shot. In another visual shot using a glass of alcohol, we are pulled below its smooth surface into the world of intoxication. There is a beautiful moment in cinematography when the liquid in a hidden bottle refracts some light and reveals itself to a frantic Don who has blacked out on where he hid the bottle in the first place. The story is constructed of a couple of bookends that take place in what would then have been the present, but much of the exposition occurs in a long segment that is essentially an extended flashback. This is the part where the film is most like a Billy Wilder picture. 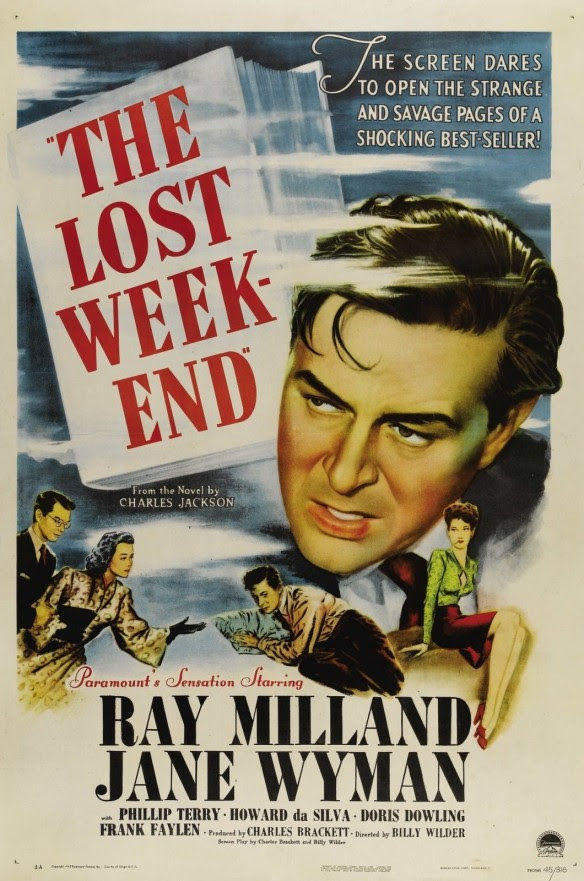 This was the first of three "message" pictures in a row to be named Best Picture. It was startling for its time but now seems somewhat tame in it's approach. There are dark themes in the story that fit the mold of some of Wilder's great non-comedies, but there is  that heartwarming sellout at the end. Most people will be glad for the ray of hope, but people who saw Joe Gillis floating in the pool at the start of one film, and Tyrone Power stabbed by Marlene Dietrich at the end of another, will wonder why Ray Milland's brains were not on the bathroom mirror.
Posted by Richard Kirkham at 7:51 PM

One of the things I like about Wilder was that he didn't have a standard ending. Sometimes you get the ending you want, sometimes you get the downbeat. It keeps the audience guessing when they know the guy who wrote it is just as likely to go either way with it. The Lost Weekend isn't a perfect film, but it does have a perfect scene--Don trying to hock his typewriter for a bottle. Jesus, but that's gutting!

You know he has hit rock bottom then. The scene with Nat the bartender showing up with it later is one of those moments that satisfies emotionally but intellectually it feels like a cheat. Still a good film, but Wilder did so much better so many other times.