I looked forward to this all week. It's been five or six years since I watched this movie and my memory of it has always been strong. I saw it originally when I was the same age as Travolta's character in the movie. In December of 1977, this became the movie that defined a generation. In the 1950's it was "Rebel Without a Cause", in the 1960's it was "The Graduate". For the seventies, "Saturday Night Fever" summed up the uncertainty about who we were and where we were going. The focus of the movie was on youth culture and it was not really a pretty sight despite the fact that it featured some pretty cool dancing and a great looking leading man. I'm happy to report that the film plays well still and it reminds me of all the things that were great about 1970s movies. They were honest, they were sometimes grimy, and they were willing to punch you in the gut or slap your face to make a point.

A week ago tonight we watched the last Bee Gee Standing, perform a fantastic set at the Hollywood Bowl. You can't really talk about "Saturday Night Fever" without mentioning the biggest film soundtrack in history and one of the biggest selling albums of all time. The brothers were denied consideration for an Academy Award by a technical interpretation of the rules that year. Had they played the game like everyone else did, they would have walked away with it. Instead, we are trapped with the legacy of "You Light Up My Life" as that years winner, and "Thank God it's Friday" as a follow acknowledgement of the pop zeitgeist of the time. To be honest, it's not that big a deal because the Bee Gees songs from this film are still played regularly and people know the music even though it is more than thirty five years old. When Barry Gibb started the show with several tunes that were included on this soundtrack it was attention grabbing, but when he finished the main set with a dose of songs that included "Night Fever", 16,000 people were standing up doing the hustle.

The movie starts with a bang, you get a Brooklyn eye view of NYC, and then a close up of feet walking to the rhythm of "Stayin' Alive". As we watch the legs move in synchronization with the music we get a close up on the young John Travolta, who was about to become a pop culture god. Tonight in the back of the theater I heard two women wolf whistle when his face came up. Let's admit it, he was a good looking man at the prime of life and between this movie and "Grease" six months later, he became the biggest star in the world. The song is kickin' and is so well known that it is used in teaching CPR because the rhythm is such a match with the human heart rate. This movie is not plot driven, it is really a character piece and we start to know this character within seconds of his appearance on screen. As I watched this, it suddenly became obvious where Tom Cruise cribbed his tooth filled grin crutch. Travolta makes the movie feel alive every time the corners of his mouth go up and he flashes that smile. Even though this is a drama, there is a a lot of humor to Tony Manero's personality.

Film critic Gene Siskel frequently mentioned that "Saturday Night Fever" was a favorite film of his, and it is a well known piece of trivia that for many years he owned the white polyester suit that Travolta wore in the last quarter of the film, including the dance contest. That is another indication of it's iconic status for the film generation that came of age in the 70s. The movie does a very realistic take on the lives of young men in this culture. It is true that there is some hyperbole with the gang fight and the pregnant girlfriend device, but watch the dinner scenes and you will know how real it is. All of the family scenes play out as real slice of life moments. The workplace interaction that Tony and his boss have seems genuine. When you watch Travolta's face as he looks at the other guys who have made their lives at the paint store, you can see that the theme of the movie is not about dancing, but really about the question of who you want to be.

All of Tony's friends would like to be him, as the "King" of their social environment he is to be envied. Stephanie, the girl Tony wants to dance with and romance, wants to be a Manhattan sophisticate instead of a Brooklyn girl poser. His brother wants to be something other than the priest he has been pushed into becoming and his parents want his brother to be the thing that brings them the most comfort, "Father Frank". Annette, the rejected dance partner wants to be Tony's love object. It looks from the outside that Tony is the one who really knows who he is, but as the movie goes on, we see he is just as unhappy with his perceived self as everyone else is. The dancing skills makes him "special", but he is insecure about his own future, and when he sees that even dancing cannot be trusted to show off who he truly is, then he has to face the reality that change requires that he make some decisions about his life. 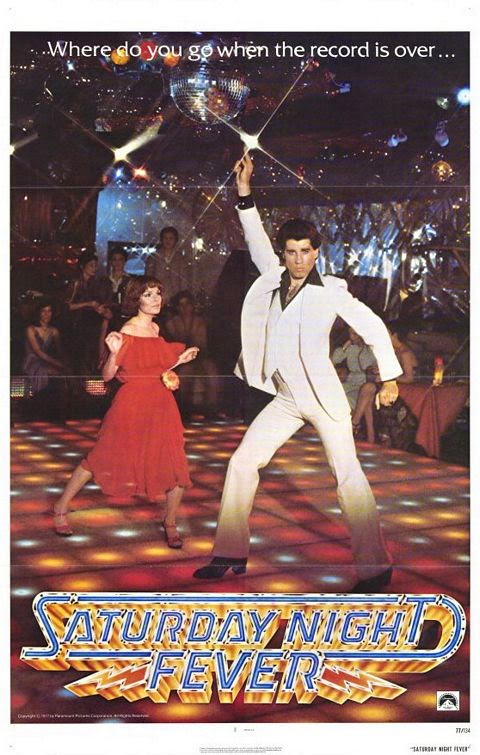 The dance sequences are great to look at and a couple of moments are really special. They won't be eternal like Gene Kelly moves, but they feel big and real and relevant to the character in the times. The conversations never sound tin eared even though there are some cliched moments in the movie. The music is timeless even if the dancing is not. The song "How Deep is Your Love" is used very effectively as Tony comes out of the bad night he has had and comes to the point where he admits that things can't stay the way they have been. Musical interludes are sometimes used to fill a story, here they are used to fill out the story. This was a movie of great synergy, between the Music of the Bee Gees and the film star making performance by John Travolta. The tagline on the posters said it all..."Where do you go when the records over?"

I recently purchased a pristine copy of the PG version on VHS from eBay. As far as I know, this version is not available on DVD or Blue-Ray in the United States. After nearly 30 years, I was very curious to remember what the difference was between both versions. Clearly, there's no comparison, but I have to admit that most of the edits and deletions are done rather smoothly. When I was a kid, though, the PG theatrical re-release was a blessing because it gave me a chance to see this great film again on screen. I saw the original R-rated version when I was ten years-old, but there was no was my parents were going to take me to see a film filled with such raw profanity a second time. Anyway, I suppose now that I own the PG version in some form, I can show it to my eight year-old son and not worry too much.

Complete agreement with you on the synergy between movie and soundtrack. I don't think this would have anything like the power it does with a different soundtrack behind it--the two are nearly perfect together.

The story here isn't really that exceptional. It's pretty much a standard coming of age. But it's done really well and it's done within an inch of its life. I liked this a lot more than I thought I would. That's always a pleasant surprise.

Eric, make sure you watch it before you show your boy. It was still sort of tough. Of course my kids saw Jaws when they were five so maybe I should shut up. The OH version has not been released on DVD.

SJ, you are right, it is a standard coming of age story, but with all that 70s angst. Thanks for posting guys.