AMC is currently playing a series of films from the past in showcase times on Sundays and Tuesdays. I did not get to "Bonnie and Clyde" and I will miss "Dirty Harry" next week, but I got a chance this afternoon to revisit Stanley Kubrick's version of "The Shining". It is a great film even though it is not as scary as you might have been lead to believe. It is creepy as all get out, and there are some good shocks, but the most disturbing and frightening image is a series of words typed out on a page. The gore level is low, the tension is slow building, and the style is all Kubrick, who has always been a "cool" film maker as opposed to a passionate hot.

This is not a full review but just a few comments about some of the things I noticed in the film that either escaped my attention before or that I'd simple forgotten. For instance, the guy who hires Jack Torrance to be the winter caretaker is Barry Nelson, a well known TV and character actor from the 50s and 60s who had the distinction of being the first actor to portray James Bond on screen. That was something I got a kick out of. The movie that Wendy and Danny are watching when Danny goes up to their apartment and finds his Dad sitting on the edge of the bed was "The Summer of 42". I don't know for sure why it struck me as interesting except that I'm a big fan of that movie.

Actor Tony Burton appears briefly in the film as the guy who gets Scatman Crothers a SnowKat to take up to the Overlook Hotel. He was Apollo Creed's corner man in the first couple of Rocky movies and he was a customer of the insurance agency my wife worked for thirty years ago. She said he was a very nice man, and I think he lives in our area because there is one of those autographed shots of him at the local Phillie's Best Sandwich shop. I also enjoyed the fact that Dr. Tyrell was serving the bourbon in the bar to Jack Torrance. Apparently Joe Turkel was a favorite of Kubricks. 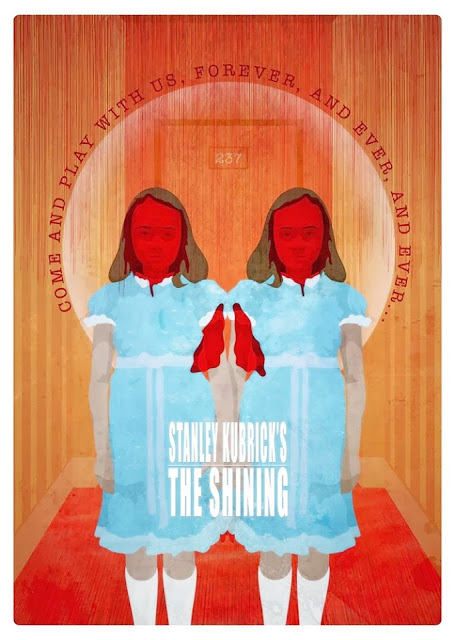 Jack is at his Jack best in this movie. His performance is all eyebrows and smiles. Up until the end of the picture he manages to be a sympathetic character. You'd have to sympathize with a guy married to Shelly Duvall's Wendy. She is a nervous breakdown in a dress. I think I heard that Kubrick did not care much for her as an actress and tormented her to get the performance she turns in. It was an odd choice and it works for the movie but she doesn't get the kind of emotional support from the audience that would make her a more fulfilling heroine.

I have a lot of other things to do so as I said this is not a full review, just a bit of fun to remind people it is Halloween week and they should go out and find a scary movie to enjoy. That's what I did, even though it is 33 years old.

Posted by Richard Kirkham at 6:29 PM

Still my favorite horror film of all time by my favorite director of all time. Have you seen this rather underground independent documentary called ROOM 237? Not the best thing I've ever seen, but it attempts to find deep, underground, hidden meanings behind much of what's in the film. Though, it fails to tackle the most important dilemma of all and that is - just what IS the meaning of Jack Nicholson's presence in that picture taken in July 1921??

Eric, if the Kubrick exhibit comes to NYC, you have to make the trip,it's amazing. I posted some pictures back in June you might enjoy. I could just reach out and type if I wasn't afraid I'd have been kicked out.