I'm afraid this sequel should have been called "Machete Sucks".

If you have read this site in the past, you know that I am a as big a fan of trash cinema as the next person. I enjoy those terrible SyFy Channel shark movies, I like to wallow in bad taste humor and violent action films are my Big Mac. So this series of movies, based on a trailer invented for the "Grindhouse" feature a few years ago should be right up my alley. I will admit that there were some great bits in "Machete" when it came out three years ago. My favorite part being Machete's use of a guys intestines to swing down a couple of floors and escape. The problem I had with that film was that it started moralizing about political subjects it had not earned the right to be serious about.

Rumor had it that this new version steered clear on the Illegal Alien subtext and stuck strictly to an action formula. That had my hopes up but they were quickly dashed. "Machete Kills" is supposed to be fun trash cinema and it is dumb trash cinema. Writer Director Richard Rodriguez has taken a great idea, and a great character and turned it into a meaningless cartoon with less personality than Scooby Doo. Somewhere he got the idea that all he had to do was show cool images and that would be enough. There are a lot of neat looking things in the movie, but they are pasted together in such a slapdash fashion that they mean nothing and don't hold your attention or build suspense. It feels like a TV movie made by someone who has seen enough action films to know what to include but has no idea what an action film is really all about.

The bad guys are all built up to be horrible but they are dispatched without any fun or glee. People are shooting all the time but no one seems to feel any anxiety about being shot at. They die too quickly or escape without consequence. Much of the film reminds me of "Sin City" which was all about the look and did not have a single moment of real emotion in it. Pacing feels wrong, everything happens quickly and without purpose. Characters change allegiance, personality and their faces for no reason whatsoever. There are jokes that just lay there and do nothing and random people are killed without any explanation. The CGI bloodshed may have something to do with this. So much of it seems designed for a visual gag, but the gags only work if we are caught up in what is going on.

Danny Trejo is a national treasure that is wasted here. Action stops repeatedly when he is threatened and he is not escaping by using his wits. When there is a funny bit it is thrown away so quickly that there is not much chance to enjoy it. Mostly he is asked to walk around mayhem that goes on around him. Slow motion walking does not build a good character. It's as if he was directed to express no emotion at all, but he needs to be angry and determined. He looks lost in a PG sex scene and bored in every other scene. No one gets to spend much screen time with him and that also undermines our ability to care. 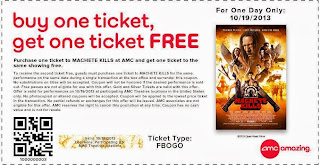 This is kitchen sink film making. Throw in everything we can and everyone we can get. Jessica Alba is gone in the blink of an eye, Michelle Rodriguez can't blink her eyes and Amber Heard, who I liked in "Drive Angy" walks through this with an irritated scowl as her main facial expression. Antonio Banderas, Cuba Gooding Jr., Walton Goggins and Lady GaGa all play the same character. It is a joke that gets repeated four times and was not funny the first time. The film wants to be a cheap parody of James Bond and Mission Impossible, it's not even a good parody of "Spy Hard ".  The grindhouse fare of the 70s had grit under its fingernails and simple stories that played out in obvious ways but at least you could tell what was happening. This movie feels as if it was assembled in a computer from a writing program that did not care about motivation, continuity or entertainment. We saw it today using an on-line two for one coupon from AMC. I now understand why they have to bribe people to come see it after only eight days in the theaters. If I had payed full price for two tickets instead of half price for matinee tickets, I would be the one who wanted to kill. 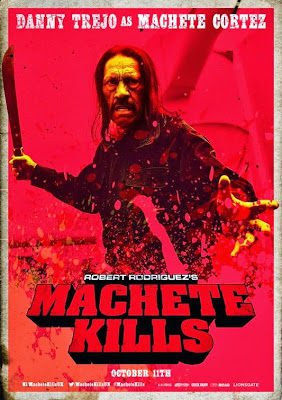 Posted by Richard Kirkham at 2:08 PM