Everyone has an opinion about remakes. Most cinephiles hate them with a passion. "The new version will never live up to the original and Hollywood is creatively bankrupt". Of course people who have never seen the original don't care and they may first fall in love with the new work sometimes without even knowing that it was made before, "Oh my god, it's a remake? The original can't be as good." My opinion is that a remake is only likely to succeed if there was something about the original that is evergreen. The subject, the role the concept has to be something that people can relate to. This film is not an English language remake of a foreign film, so stupid Americans can watch without reading. It is a traditional remake, a chance to tell the same story in a different way for a new audience. Having seen the original however, it is impossible to approach the new film with impartial eyes. There will always be comparisons. So this review will focus on the comparisons.

The story is largely unchanged. The plot moves in the same direction with the same basic characters so there are no surprises as far as that goes. If you saw Brian DePalma's 1976 original, you have seen the story.  There are differences in style though that are interesting and help the movie feel fresh despite the previous version. For instance, the start of this film is very different, it has a flashback story technique that takes a little advantage of our expectations and makes what follows a bit more meaningful. Julianne Moore is playing the Piper Laurie role of Carrie's mom. She is pathetic and frightening and loving and hateful, and usually all at the same time. The religious fanaticism here is contained to her world and unlike the original, this woman is not surviving on the charity of guilty Christians. She is even more clearly disturbed than Laurie was in the part. That being said, I think she feels less of a presence than in the 1976 version. Carrie's powers dominate after she gets asked to the prom, and the terror that we felt for Sissy Spacek when she returns from the prom is less ominous as a result.

The DePalma version starts with a lurid trip through the girls locker room and the movie is on the brink of being an exploitation film, but it is held back from that by a sympathetic central character. This version never feels dangerous in the same way. It is going to be a serious film from the time it starts and the directors restraint at the beginning creates a more subdued feeling. The bullying that Carrie endures is exaggerated by the modern technology but the bullies are mostly the same. Chris, the main antagonist, acts out her rage at being called on the carpet for being a bitch. When she can't get away with it, even with her father confronting the principal she goes off the deep end. Nancy Allen's version of Chris is mean girl standard, Portia Doubleday is a monster in the making that crawls out of the larvae stage to become a full fledged antagonist. The one flaw from the original film was that Chris' comeuppance was over so quickly, that is a mistake that is remedied here.

In the original, it always seemed to me to be very ambiguous as to Sue and Tommy's motivation for getting Carrie to the prom. William Katt came off as a good natured doofus, and Amy Irving did not quite break with the Chris character. Their involvement in the end becomes a bit of a puzzle. In this version, Sue is clearly conflicted about being one of Chris's drone bees. She is motivated by guilt and a desire to reach out to Carrie. Tommy in this version is also very sweet and he seems to understand his role much more clearly. His exclamation of "What the F@#*" as the crimson shower comes down on them signals to the audience and to Carrie that he was a victim of Chris as well. This is another point that makes the emotions work better although the mind is not taxed as much. I'm not sure which version I prefer but I do know that Tommy is sympathetic in both and Sue is a lot more sympathetic in the new version. The mean girls that follow Chris are not as distinct in the new version so although there is some furious vengence rained down on them, it does not feel as significant.

Carrie is played by one of my favorite young actresses,  Chloë Grace Moretz (Hit Girl) for the uninitiated. She is very good in the part. Whereas Sissy Spacek was all big eyes and small voice, Chloë grows more confidence with her power and the decimation of the prom feels like a more deliberate act as a result. The harshness of the original is tempered here in that not everyone dies at the end. That may feel like a sell out but it will make a more sympathetic Carrie at the end of the movie. The remorse and compassion that Carrie feels at the end makes us more likely to resent the "Burns in Hell" graffiti that is the exit of the film. There was no way that the stinger from the original would be matched or that it would work, so they don't try for that. Instead they try for a more supportive outcome that makes us more likely to feel for our protagonist. 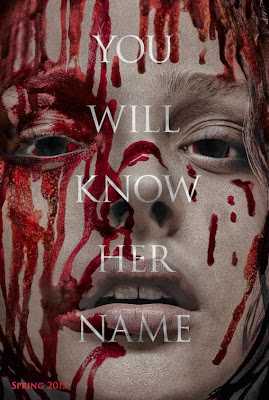 The one thing that did clearly fail in the film was the CGI effects. They take us out of the movie and were overdone. If you have seen the viral video of the coffee shop, you will see a more convincing and frightening version of the power that Carrie wields. I don't know that we can but the genii back in the bottle but the old school effects are more effective at creating real shock than the modern computer. I was very satisfied with the film. The story still gives us a slow burn and the actors do a good job making their characters feel fresh even though this is a remake. Since I'm not a hater I am willing to give this movie my approval. It was not necessary but it was not a waste of time either.
Posted by Richard Kirkham at 1:33 PM

I want to see this, and like you, compare it to one of my favorite De Palma / Spacek films. I'm glad to hear you found things to enjoy about it. I know I'm interested to see what a woman director could bring to Stephen King's story. Thanks, Richard.

Thanks Michael, you'll find it interesting and not embarrassing.

As you're well aware, I'm one of those people who's first and very quick to damn the Hollywood remakes of today. Though, I must confess, during a time when school bullying is a very strong subject, the story of CARRIE almost has clear relevance. I suppose I'll see it sooner or later on DVD.

It's the same film with different actors. I'd always go with the original but if you see this, I don't think you will hate yourself.