This will be short and to the point. There is almost no way this whole scenerio could ever come close to happening. It is over the top dramatic and the prisoners in the "Tomb" would not have the same access to each other that they would have in a normal prison. The job that Sly has is one of those movie created specialties that exist in a screenwriters fantasy and that's about the only place. The speed of events and the brutality of the fights would leave normal human beings dead after a couple of minutes. All of that means nothing because this is an action film starring the two biggest action stars of the last thirty years and it goes down like candy. Sweeet.

As the world's foremost prison security expert (based on breaking out of high security penitentiary's). Stallone is his usual tough guy with a brain character. His brain is not big enough to keep him from being betrayed and locked in a prison that was built largely based on weaknesses he himself discovered.So the stakes are pretty high. Guess who he runs into on the inside, the Governator himself. Looking fit and with a stylish moustache and goatee. He is another prisoner who has been deep sixed into this high tech prison. Together they must break out. That's it. You don't really need more plot set up than that.

Arthur Conan Doyle gave Sherlock Holmes the detailed information he would need to crack a case. Holmes has made a study of tobacco so he knows where in London a certain blend can be bought. It was occasionally a stretch but it was not overused in the Holmes canon. Sly's character kno2ws the heat rate at which rusted steel bolts will snap, he knows that milk cartons have a cellophane like liner that can hold a mark and he can not only build a sextant, he can use one and teach someone else how to do so also. Yet this is the kind of hokum, fans of action films love. We love it when the hero outsmarts the bad guys and surprises us with a unexpected use for everyday items. MacGyver made a whole TV series out of that audience demand. So shrug your shoulders and go along for the ride.

Schwarzenegger is actually pretty good in his role as a guy who knows secrets that the bad guys want. He gets tortured and locked into isolation and gets to feign a breakdown as part of the plot to escape. His German sound very convincing, I wonder why because his English never was. Both he and Stallone beat up fellow prisoners and each other from time to time. The movie takes a while to get us to the prison but once it does there are plenty of the usual tough guy tropes. The biggest gas comes when, during the actual breakout, Arnold picks up a big ass machine gun off a helicopter. Anyone who has seen a Terminator movie knows what comes next and that's what we are waiting for. 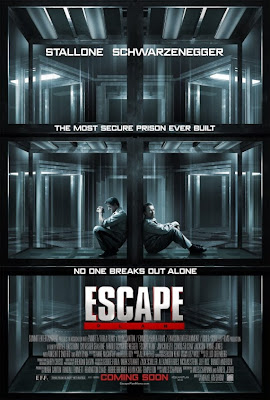 The movie is efficient at making the characters just interesting enough for us to care, before tossing us into prison mayhem. The bad guy warden played by Jim Caviezel is just a big enough prick that we are anticipating the final outcome. There are plot holes and inconsistencies galore but who cares? Arnold and Sly get together to kick a little ass. I heard on "The Title Pending Movie Podcast" that they did not think it was quite "Cobrawesome". I guess I agree but I did find it "Terminazing".

Posted by Richard Kirkham at 5:56 PM

Heh, I think this movie was pretty much exactly what everyone hoped it would be, some good dumb fun and a great time seeing these two action stars finally get together in one of these movies for more than just a brief cameo. Fun was had, and I think that's all that matters with something like this. Nice review. :)

Thank's for coming by Chris and saying so. I got exactly what I wanted from it.