W.W. and the Dixie Dance Kings.


This is a flashback to the original purpose of the blog. If you were unaware, I started this blog as a tribute to movies I saw in the summers of the 1970s, when I was in high school and college. This film was on my original list of movies that I could have posted on but it was not available anywhere. I looked on You Tube and found music clips but I could not find a trailer for the film. It's not some obscure film, it stars the biggest movie star of the 1970's, Burt Reynolds and it was directed by John Avildsen, whose next film won him the Academy Award, Rocky.

I saw this movie at the Century Theater in San Gabriel in the summer of 1975. 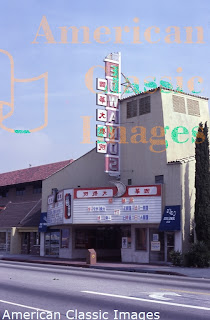 This is what it looked like in the late 1980s before it was torn down. As you can see after it closed as an Edwards Theater, it was re-purposed as a Chinese language theater. Most of the stand alone theaters in the area ended up in the same situation. The Monterey, and the Garfield, were both on the street that I lived on and they both showed Chinese language films until they were torn down or remodeled for something else. I know I saw this with my friend Don Hayes and his high school sweetheart and future ex-wife Cheryl Bolton. The movie featured car crashes and a special edition Oldsmobile 55, so that is probably why Don went, he liked cars. I know it must have been an evening show because matinees only ran on weekends and I distinctly remember going during the week since I did not have a job I had to show up to the next morning.

The movie is typical 1970s low budget fodder. Burt plays a good ole boy driving a fancy car, who takes a liking to a girl in a country western singing group. The movie is set in 1957, and there are some brief references to the rock and roll revolution that is taking place. The setting is the South, most of the time Nashville, because the goal of the group is to make it to the Grand Ole Opry. W.W. is a fast talking, small time crook who has managed to rob a series of gas stations without leaving much of a trace to follow. He accomplishes this by just being good natured and giving the employees a little kickback. Ultimately, it is his mode of operating that gets him and the band in trouble and high jinks occur. There are some car chases and crack ups, and a few songs by Jerry Reed and Don Williams.

Art Carney is featured as a Bible Thumping lawman, asked to hunt down the robbers by the head of the Company that owns the chain of gas stations Burt victimizes. This was his first role after winning the Academy Award for Best Actor the year before. So there is another reason that is a little odd that the movie is not really available. There is a pretty good payoff set up early on in the movie that let's the confrontation between he an W.W. get somewhat resolved at the end of the movie. The film also features Ned Beatty as a country star that writes hit songs and the band wants his help. There is a scene where they meet him and his down home charm is turned sour in a pretty effective way. In the end he redeems himself and it probably is as his character says, just one of the hazards of success. Beatty worked with Reynolds pretty frequently over the years and is featured in "Gator" and "White Lightning" two other films from the original project. 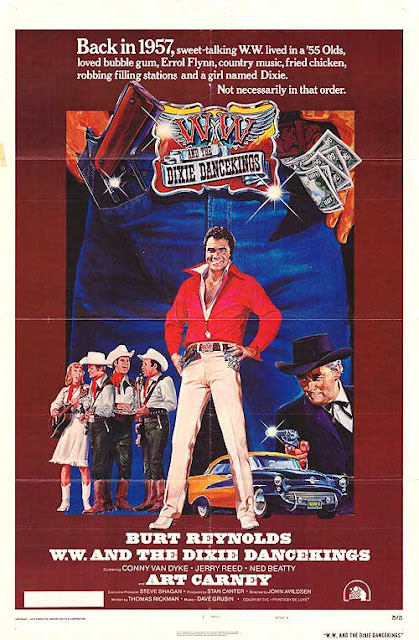 I happened to catch this just after it started on the Fox Movie Channel this morning and it was quite entertaining. There were two or three good little touches in the movie, like the two toned car, the approach that Reynold's character uses in robbing the gas stations and the Art Carney role. It's not essential viewing but it is worth a couple hours of your time if you happen to see it playing somewhere. I just am trying to plug some holes from the original project and this was a nice one to get to fill.

Posted by Richard Kirkham at 5:34 PM

I had never even heard of this movie until I looked at Alvidesn's filmography for my MTESS Rocky not too long ago. I may hit it one day out of curiousity, but not striking me as anything to chase down or anything :(

Very standard Burt Reynolds mid-seventies material. Entertaining but disposable. Alvidsen did some interesting work in the early seventies with Joe, and Save the Tiger. I'd recommend them first.