The Croods is pretty much what you would want from an animated family film. There is a breathtaking visual palate, a family safe adventure, and humor geared to the little ones and the adults in your group. While it does not reach the heights of a Pixar film or  the the warmth of traditional Disney fare, it is serviceable and entertaining if not always memorable. This is exactly the kind of movie that parents want to be able to take their children to during spring break and the timing of it's release should insure that the movie is pretty successful.

From a story perspective, "The Croods" is pretty standard stuff. It is a coming of age story that focuses on a family of cavemen. Just as the oldest daughter is entering a rebellious stage, the territory of the planet is changing and newer smarter hominids appear and offer a threat of change but also survival. Of course the newest species is represented by a hunk of a cave boy who is threatening to the Dad/Leader of the family troop in a couple of obvious ways. This gives us a teen age romance and a middle age crisis all in one fell swoop. There are some contrived personal relationship moments but they fit with the theme of the film and while they may be cliche, there is a reason that cliches exist in the first place. Basically families are problematic but ultimately they are held together by the love that each member feels for the others.

We skipped seeing this in 3D but it looks like it might have been fun. It does seem to me however that in order to take advantage of the 3D  process, every animated movie is using some kind of sweeping swooshing flume ride style action sequence. Once again, as was true in a number of previous animated 3D films, characters slide down slopes, get swallowed by tube like caves and roll away on waterways to give us a thrill in visual dimensions. There is also a wide variety of flora and fauna as well as creatively designed creatures to keep us jumping and oohing and aahing.  James Cameron's Pandora has nothing on these imaginative animated images.

The character voice work is efficient. Nichols Cage is somewhat subdued since his performance here is animated and the over the top delivery he is often guilty of in live action films is moderated by this format. Everyone else was fine but not very distinctive. Cloris Leachman does the patented old lady routine that was the realm of Phyllis Diller and Betty White before her. Emma Stone does fine by "Eep", the teen age cave girl with more curiosity than her father is ever going to be happy with. Ryan Reynold voices the appropriately named "Guy", plenty resonate and future hunk-like. So many people contribute to animated films that it is difficult to pinpoint credit or blame for some elements. There are only seven human characters, most of the other voice/sound work involves animals and eruptions. I appreciated that "The Croods" did not attempt to live up to their names. There were no fart or poop jokes, and that is pretty rare for a kids movie now a days. 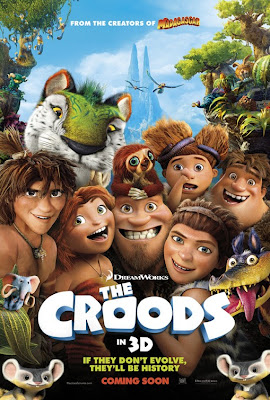 There is an early sequence that apes American Football and it seemed obvious to me that the Trojan Marching Band/Fleetwood Mac hit "Tusk" was being used very freely. It turns out that it was adapted by the film score composer and there was credit given, alleviating the need for a lawsuit except by Bruin fans who are unknowingly going to be subjected to chants of "U-C-L-A sucks" during this scene. Maybe that's why i ended up liking the movie as well as I did. The reality is that there were plenty of parents with their kids at the a.m. screening we went to, and all the little girls seemed happy to be there and all the little boys identified with the adventure elements. If it is a success, someone will plan a sequel, but I think in the long run it would be better for the reputation of the film if it stays a one off. The story does not demand any follow up and the creativity would probably diminish. Very much like it's stable mate "Madagascar ", "The Croods" is a well executed piece of entertainment that could overstay it's welcome. Let's just enjoy it for what it is and move on to something else next time.
Posted by Richard Kirkham at 1:33 PM