I saw the first G.I Joe Movie a couple of years ago. I guess it was before I started the blog because I don't have a review posted. I do remember telling several people that it was "craptacular". It was loud, stupid, confusing and entertaining enough to fill a Saturday matinee and allow me to kill a bucket of butter popcorn. The sequel is just about the same. It is not a good movie but it is a good time. If you see it in 3D, it doesn't make it 3 times as good but it does make it more interesting and gives you some extra value for the effort that you made. Several scenes seem to have been planned with the express purpose of making cheesy use of stuff flying off the screen. Let's face it, this is a movie, based on a cartoon that was based on a toy line that was promoted on television. It has a lot pushing against it to begin with, if it manages to be enjoyable at all, that is something of an accomplishment.

My memory of G.I. Joe is completely different from all of the stuff that makes up this storyline. Check out this commercial from the toy line when I was growing up:

Somewhere in the early 1980s, the action figures got smaller, and the toy line got bigger. I remembered hearing speeches about how inappropriate it was that toy lines were creating cartoons that would serve as long form commercials for their products. "Transformers", "My Little Pony", "He-Man" and "G.I.Joe" were all cited as examples of this phenomena. It appears to have taken root in the consciousness of kids from that decade because they are now nostalgically returning to their youth and sharing it with their own kids. So now the commercials are not half hour television cartoons badly animated, but two hour motion pictures, almost animated and badly written. The cartoon like villains  in this movie put it in the same category as the "Transformers" films, they are action-fantasy films, and you can buy the toy. I still don't know why there are ninjas in the commando units but who am I to question the successful marketing of this product line? 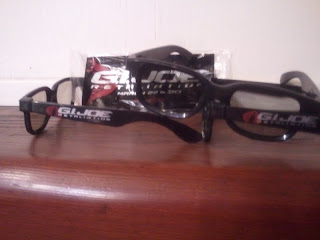 The ninjas actually provide the best reason for the use of 3 D in the movie. There is a long sequence where two American Ninjas must fight against a whole squad of evil "Cobra" ninjas, and capture a duplicitous ninja who is somehow connected to the good guy ninjas. Read that sentence back, believe it or not that is an accurate description. Anyway, even though it makes very little sense, the ninjas repel down mountain sides, use zip lines and pitons to escape and fight on the side of the mountain.  This is all done in a way to allow the ninjas to fly off the screen, swoosh past our faces and then toss another bad guy off the mountain into the audience dimension. All that effort and the bad guy ninja, the cooperates with the good guys for no particular reason except some distant grudge that apparently is awakened by being kidnapped. At least we got to keep the cool customized 3D glasses.More collectible toys to keep the marketing gurus happy.

I did have a vague recollection from the first film that the President had been replaced with a "Cobra" agent. The best part of this continuity is that Jonathon Pryce returns to the film and lends it his dignity. How an English guy got elected President in the first place is a mystery, but I guess if we can have a President from Kenya, we can have one from England. (For those of you with no sense of humor, that is a joke, Do not take it as a belief in birtherism or Manchurian conspiracy theory). Channing Tatum was also in the first film, but it appears that the producer's did not realize how his career was going to take off. I heard that one of the reasons for the year long delay in releasing this was to put more of Mr. Tatum in the movie.  Joseph Gordon Levitt played the bad guy in the first film but I guess he didn't want to be back or was not going to get paid his current rate. He is replaced by a costume, and it is no great loss, he was almost not in the other movie either. Two stunt guy actors get pretty good parts, Rays Stevenson and Park. There is also a juicy part for Walton Goggins, Amanda's current crush. And the kid from Jurassic Park dies early.

The two biggest assets G.I.Joe Retaliation has going for it are Dwayne Johnson and Bruce Willis. These two guys are in nearly every movie coming out in the first eight months of 2013. Whatever they are not in stars Mark Wahlberg.  I have always enjoyed "The Rock" in movies, and I was never a wrestling fan. He has a good star presence, lifting even terrible material to at least mediocre. Bruce Willis is one of our favorites, but after the awful "Die Hard" sequel earlier this year, I was a little concerned. He seems to have awakened from that slumber (or given that the film was delayed, fallen into a slumber). Here his natural charisma adds to the film and he gets to punch in some energy without having to carry the film on his own. 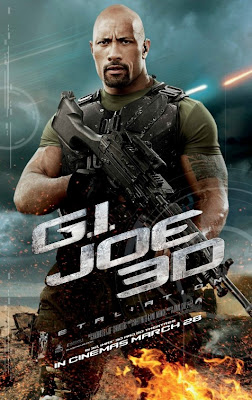 If I had played with the later toys, I probably would not need a score card to keep track of all the players. No one is invested with much of a character except Johnson and Tatum, and their character comes delivered via video game, so you can tell how thin it is going to be. Stuff blows up, guns go off, swords get crossed and characters live on to fight in another sequel. I don't really care about any of it, but it was fine while I was there. I'm sure I won't remember much about it in a couple of weeks. I am afraid I do want to see General Patton's Ivory Handled .45s being used on the bad guys, that might be enough to get me into the theater three years from now, but nothing in the story is going to last long enough to anticipate it.

Posted by Richard Kirkham at 10:01 PM

You were quite polite to these guys I thought. You pointed out the movie was a waste very politely, didnt hate on them too much, etc etc. Maybe those Joe toys made you a bigger fan than you thought! :D

Unless it irritates me, I usually try to see the best in something. Maybe the 3D glasses tinted my view..