Gerard Butler has been in some terrible movies in the last few years. His roles in "Phantom of the Opera" and "300" are almost a decade old now. So how does a guy, stuck in crappy romantic comedy hell redeem himself and return to box office success? The answer appears to be produce your own film, choose something that emphasizes the things that made you a star in the first place, and surround yourself with talented people who know how to make a movie work. The result is "Olympus has Fallen" an entertaining as all get out throwback to the action films of twenty years ago. This is the movie that "A Good Day to Die Hard" should have been.

Every few years we get studios battling it out with dueling films on similar themes. Back in the 1980s, two studios combined to merge Diane Fossey movies into "Gorillas in the Mist". Four years later there were two Robin Hood projects, one studio blinked and sold their product to television. Then there were matching Volcano movies and battling Meteor destroying the Earth films. This year we have two action films about an attack on the White House. "Olympus has Fallen" hits theaters first and sets a pretty high standard for action movie mayhem. The set up is pretty straightforward although preposterous. North Korean terrorists seize the President in order to gain political and military advantages. I get the impression from the trailer for "White House Down" that we will be getting domestic terrorists seeking a similar objective. I don't know how that will play, but it appears that Kim Jung Un wants us to believe this is possible. The North Koreans are acting in a belligerent and bellicose manner at this very moment, and the film exploits that behavior pretty well to make the premise somewhat acceptable.

The degree of firepower used in the take over of the White House in this film is alarming. The violence is brutal and there is a good reason that this film is rated R. The Secret Service and the D.C. based military units committed to defending the President's house are out gunned and the level of brutality was somewhat reminiscent of the last "Rambo" movie. Killing is indiscriminate and there are no rules of war being observed. If you are not up for a violent film then you better skip this, but if this is the kind of action that you crave, this movie will fill your plate. While much of the battle is CGI enhanced, there are dozens of extras and actors who take the stunts to the limit, flying through the air or having squibs explode their bodies. A lot of modern technology has been focused on this film. I have mentioned in some past reviews that it appears that Eastern Europe is rapidly replacing Korea and Taiwan as the leader in animated and computer rendered effects. There were several sections in the credits where every name ended with a v, usually an ov. Those that did not end with a v ended with an a. Bulgaria must be swarming with computer animators looking for work.

Butler plays a Secret Service agent with a bit of a history. We are shown his heroic nature and the nature of his failure early in the movie. The purpose of this is to add to the drama with the President's family and to raise questions in the minds of those dependent on him later in the movie. His character however, never has any doubts about his own ability. He never hesitates to act when needed and he behaves in a very consistent and aggressive manner in the film. This is how people want to see Butler, kicking ass and taking names, not trading banter with a series of actresses who can't carry a picture on their own. There are some good "Die Hard" type exchanges with the bad guy, and he gets to argue with generals and the acting President. None of the dialogue reaches the comic heights that Bruce Willis manages in the first four Die Hard" films, but there are a couple of nasty comebacks that give us some satisfaction.

The movie that this should most be compared with is "Air Force One".  The plot is simple, there are insiders who betray the President, it is one against many and the outside leadership group often feels powerless to act. There are plot holes that you can ignore because what is happening in front of you is more fun than noticing that there are other choices and options that the protagonist and the temporary command structure are missing. The cast is loaded with good actors who make their scenes work more effectively. Angela Bassett, Robert Forester, and Melissa Leo bring some gravitas to the silly goings on. Any time you get Morgan Freeman playing the President (Acting or Elected), you get some sense that people want this to be seen as something more than a cartoon. Dylan McDermott gets to return to work for the secret service, a job he had twenty years ago in "In the Line of Fire". Rick Yune plays the lead terrorist, mimicking his role in the last Pierce Brosnon 007 film. The poor guy seems to be getting a little type cast, but his acting range appears to fit the type so it's probably just as well that he gets to work at all.  Gerard Butler has some early scenes where he gets a chance to emote a bit, but once the action starts, he basically turns into the action figure that a movie like this requires. He brings enough personality to the performance to raise it above the level of a straight to video programmer. Aaron Eckhart plays the President and he is believable but underwritten. There are some nice sequences with his son that set up some more emotional points but it is standard stuff. 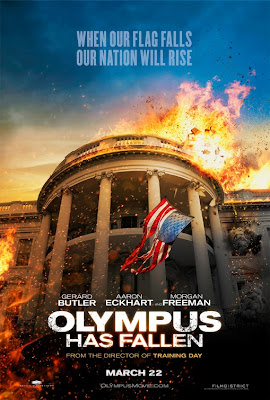 The action is staged energetically. Big fights and battles are mixed in with one on one combat. There are also several high tech operations and weapons that add to the suspense in the film. There are some good ploys by the bad guys to disguise some of their actions, but there are also several things that are left unexplained. It would be easy to knit pick the films plot and twists but why would you? If you paid your money to be entertained, you will be. If you wanted something that was logically sound, you will be disappointed, and you should have your head examined for wanting that from the film in the first place.  I also enjoyed the patriotic flourishes spread out through the movie. The Secretary of Defense defiantly shouts the pledge of allegiance, the American Flag is mistreated but ultimately restored, portraits of the Presidents are often shown in background shots and Abraham Lincoln makes a guest appearance and this time it's not vampires he is hunting.  This movie feels like it was made in the 1990s. The plot, action and tone recall the days of  the great action films of those times. This will be one of those movies in the future that are sometimes called "Black Hole" films. Their gravitational pull is so great that the viewer can't resist. (Thanks Dan for that term). If I don't see it again in theaters, I know I will experience it a hundred times on cable, and each time i will enjoy.


Posted by Richard Kirkham at 8:58 PM