Some films thrive on story, other depend on special effects and many rely on star power to make the experience worthwhile. "Seven Psychopaths", wants to be story driven. It is pretty clear that it grows out of the screenwriters struggle to come up with an interesting story to tell. The problem is that the screenwriter here has too many ideas to put into a story but no real story that can make them all work. He puts them in anyway. If you pull at the threads of the films narrative, things just don't fit together very well, and it feels like a creature assembled in a windmill somewhere. It is an interesting creature but not a beautiful one and not well crafted. This movie thrives on it's performers. The three main characters are played by three pros who know how to put quirky on the screen. They are joined by another actor, who is not in the same class but brings considerable skill to the game and makes the mix work even at times when the story fails.

Let us start with the Godfather of modern quirk itself, Mr. Christopher Walken. For thirty years he has been the odd guy out in movies. Sometimes his weird delivery and haunted face bring terror to our hearts. When know that he is a ticking bomb and that when he goes off, there will be trouble like you cannot imagine. Other times, he is the charming comic diversion; a comforting joke in the middle of a movie that needs some life or audience sympathy. If he can singlehandedly steal "Pulp Fiction" from all the great characters populating that movie, and do it with what is basically a three minute monologue, then you know you are in the hands of a real performer. He he is a featured player and he may have the most lines if anyone bothers to count that stuff. He begins the film as all older man charming, movies to scary repressed fury and finishes with bemused indifference. His line readings and facial expressions are worth the price of admission in most movies he appears in, and his part is more prominent here. You will get your entertainment value from him.

I love Sam Rockwell as an actor. The first time I was sure that I noticed him was in "Galaxy Quest" and I am laughing now while simply thinking about his performance there. He can be warm, dangerous, smart or stupid and he is believable. In "Seven Psychopaths" he may be the most over the top character, but he plays it as naturally as anyone can, slipping into the skin of a deranged but lovable sociopath. He has an uncomfortable sex scene that he plays without any self consciousness. The one spot where he goes off the reservation in an unbelievable way, takes place during a desert camping moment when peyote is the alleged cause of his behavior. Writers must think drug use gives them leave to just put anything they want into a story, including dialogue that is not funny but is supposed to seem funny. I fault the script here, not the performance, this one scene leaves him with nothing interesting to say. Down the road he makes up for it, but it did miss the mark there.

Woody Harrelson, manages to be scary, even though he has the quietest voice and most open face of any of the actors. You can however see the deadness in his eyes when his character turns dark. His moments in the film usually feature humor that stems from frustration and he can be exasperated with the best of them. The plot involves a dog-napping that features Harrelson's Shih tzu. As a psychotic crime boss, you can imagine that this is not going to go down well. Harrelson has a great scene where he terrorizes the dog walker who works for him, after his beloved pet disappears. You will be able to accept either outcome of the interview, because he sells sick pretty well.

The odd man out is Colin Farrel. He is so much better in a movie like this than in junk like the Total Recall remake. I think he is very solid here, but when you are surrounded by these three specialists in odd, your quirks and work will be less noticeable. He still gets some pretty good lines and his facial expression upon the reveal of Walken's unique body art, is quite convincing. He and Walken play off of each other well once their two characters come together in the rambling nature of the story. Farrel is essentially "Barton Fink", a screenwriter so caught up in writer's block that he starts looking for psychopath stories to fill in his list of characters. We are left to wonder, which stories are his and which are real. He drinks so much, he can't tell where his ideas start and where others ideas take over. This is the plot thread that lets in all kinds of wild story ideas, most of which never pan out. The short bursts of creativity are followed up on occasionally, but often without much purpose and sometimes with confusion. Are the two mixed race couples real, the same, one person with two different lovers, or something all together different? We don't really know, all that matters is the plot point going at the moment, but don't worry, in another minute we will be off on another track. 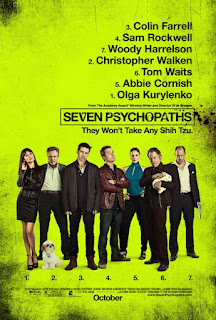 As an exercise in entertaining performances and short story cleverness, "Seven Psychopaths" works. In the last third when we get three or four different ideas for an ending, I think you will wish that the writer had spent a little less time creating the quirky characters and histories, and a little more time giving them something to do that makes sense.
Posted by Richard Kirkham at 11:20 PM