This is a movie that wants to have it two ways. It wants to be a supernatural thriller and a serial killer procedural. Although there are moments in the film that work pretty well, as a whole the movie just feels empty. It neither builds it's Boogie man enough nor bothers to explain how certain clues leading to the solution of the crimes, end up being relevant. Ethan Hawke stars in the film and while he is a good actor, the part he has to play here does little to build a desire for us to see any particular outcome, one way or another. It's Halloween time, and I wanted a scary movie, all I got were some creepy ideas and a couple of jump shots.

The first hour of the film is the most effective, as the family settles in to a new home. We learn that Dad is an author of true crime stories, and that after hitting it out of the park ten years earlier, he has lingered on the fringes of fame without being able to write a very successful follow up. It is hinted that one of the books since his big breakthrough actually had the opposite effect of bringing truth to light and that good people were harmed by what he wrote. None of this is ever explained, and it sounds to me like a more interesting story than the one we sit down to watch. It turns out that he is so desperate to return to the center stage, he has purposefully moved his financially strapped family, into the home of a family that was recently murdered. Oh, yeah, he doesn't tell his wife. Basically, he is a sad self centered narcissist, one who has talent but has lost his way. You sort of wonder if this has anything to do with the events that follow.  Although it ends up creating some character points for the family, it mostly ends up in screaming scenes that do little to build suspense and have basically nothing to do with the murders.

The clues as to what happened to the family, begin with a reel of super eight film. That's right, the technology that was cutting edge thirty years ago and made for a great Spielberg inspired film last year, it the technology that was used by the killer to film the murders as they take place. Now we understand that there is a supernatural power behind all of this, but how that film gets developed and edited and then ends up in the attic, after everything in the house has been searched remains a mystery. Also remaining a mystery is why Dad is the only person in the house to be awakened by  the loud footsteps in the attic, the repeated running of the projector on it's own, and the mysterious sounds that echo throughout the house. Whenever he goes to investigate, he also manages to lose track of where the light switch is, get out of bed without waking his wife or kids, and generally accepts that material he has boxed up will be placed on the table, threaded into the projector and run on it's own.

The best character in the movie is a small town deputy, who is anxious to help the writer, despite the antagonistic attitude of every other  law enforcement officer due to one of those books that went bad. The deputy likes the idea of being included in the acknowledgements of the new book. When he tells the author that he always wanted to be thanked  in a book with one of those phrases like "It would not have been possible without the help of Deputy So and So", he gets that nickname and that is how we know him. The deputy is a small town guy, but he is not a rube. He understands the nature of true crime investigation and the psychic scars these traumas can leave behind. He also thinks the writer is nuts to be living in the house. The conversations the two of them have are the high points of the film, both with humor and with creepy foreshadowing. He is also one of the only characters that appears during the story. Mom talks about how the family is hated and she can't shop without being stared at, but we never see her anyplace other than the house. The son gets in trouble at school for sharing info about the crime in a disturbing manner, but we never see any teachers, classmates or neighbors. Only the Sheriff ever speaks to them outside of the house. Maybe the idea was to make the movie claustrophobic, but my feeling was that it just made the movie cheap.

There are plot lines that come up and go nowhere. The son in the family has night terrors. It is not clear that it has anything to do with the plot since the parents both speak as if he has had them his whole life. The daughter paints, and that provides the payoff for the home movie set up of earlier crimes. The earlier crimes are visualized for us, but so little background is given on them that they feel a little meaningless, just gruesome wall paper for the current story. Mysterious dogs appear for no reason, do nothing and then are never seen again. The expert that the write consults, talks to him by video chat, for no reason whatsoever. There is no visual payoff on this point and it is just another place where the movie feels cheap because they did not want to have too many locations.I still can't think of any reason that the wife is British. 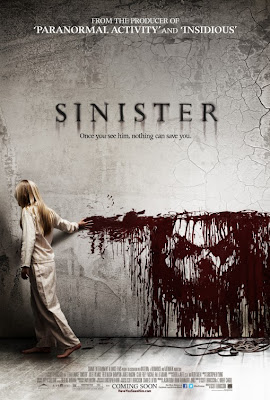 Maybe since "The Turn of the Screw", haunted children have been creepy. The image of the two little girls in "The Shining" stands out as one of those moments. Earlier this year we had some of the same type of creepiness in "The Woman in Black". This movie goes that direction as well. Unfortunately, it is not a single child or a pair of children that appear to haunt our protagonist. It is a set of six or seven kids that show up in gaunt faces, grey skin and bloodied clothes. The effect is not frightening, instead it feels like a bad birthday party is breaking up and all the tired and grumpy kids are still waiting for their rides home. This movie felt less and less scary as it went along. I did think the ending was true to what had been set up, but I also though it was trite. I don't understand how anyone other than the writer working on his true crime book, would end up doing the things required to bring the evil spirit into their life and then pass it on. It did not make any sense and none of the rest of the movie does either. There is a good premise here, but it is wasted in underdeveloped plot and a shortage of scares.
Posted by Richard Kirkham at 8:16 PM