There was almost no chance I would not like this movie, but there was also almost no chance that it would be as great as the original. Apparently I can predict the future because I was right on both counts. Taken 2 is a satisfying sequel to the original revenge story from 2008. It is hard to believe that it was nearly five years ago that the original came out. Liam Neeson has become a go to action star in his late fifties and early sixties and he looks completely credible doing so. In the time between the two Taken films, he has built up his bonifides by playing a series of tough guys in starring and featured roles.

I've enjoyed his work since I first saw him in "Excalibur" back in 1981, but in the last few years he has become a personal favorite. It may be that since Gene Hackman is no longer working, I am looking for an actor to trust when it comes to parts that feature traditional masculine traits. Tough and intelligent, with a sense of purpose in the way they walk and talk. My daughter would probably say I have a "mancrush" on him, but it is really just that he embodies a lot of the mannerisms and directness that actors like Spencer Tracy, John Wayne, Clint Eastwood and Hackman possess. They all play real types much more effectively than any other role. I have sort of avoided the "Clash of the Titans" films, because the costumes and hair styles undermine the very things I like about Neeson as an actor. He is not affected in his portrayals, there is no method angst and no tics or traits that seem obviously to be actors crutches. An action movie like "Taken 2" requires a sense of heightened reality, but it has to be grounded in what is real.

This go round, Neeson's character Bryan Mills is the subject of a revenge plot, created by the families of the characters he wiped out in the first film. If there was any way to make sense of the notion that someone would be "Kidnapped" again, this is the lone plausible stream. Otherwise, the movie would seem like lightning striking the same spot or someone winning the lottery a couple of times in a row. The basic set up takes place pretty quickly and I think that may be a weakness of the film. The head of the family of gangsters is cast well and the Albanian environment seems believable, but we get no sense of the scope of the group and their power. I think some plot development that followed their planning of the whole revenge would be helpful. The only reference we get to the set up of their plan, was a scene with the corrupt French security official who was Bryan's friend in the first movie. After that, we barely see the evil doers except as faceless drivers of chase vehicles or thugs shooting innocent bystanders for almost no reason. In the first "Taken", Neeson has to track a guy down with only a brief vocal clue as to his identity. Along the way he interacts with members of the crime family for brief moments, which give him an opportunity to practice his spy-craft, and allows us to loath some of the bad guys individually. In this film, we see the bad guys working but without much sense of animosity or purpose; except for the head man. All of Bryan's tools are used this time against the setting or environment of the abduction. We can see he is clever in tracking the path of the van that is whisking him away, but none of his tricks has anything to do with the people involved (until the very last).

It's not that the first bunch of gangsters were so interesting because they were not. The weakness is that only two of the bad guys seem motivated. The best scene that brings us closest to the set up that I think I needed a little more, takes place with Bryan hanging from a bar in cellar and the evil "Godfather" character gloating over him. The threats he makes and the violence that he acts upon do mark him as the one person that we most want to see get a comeuppance. While the resolution works, it lacked the soul satisfying (or destroying if you are a pacifist) gut reaction of some of the first films multiple climax moments (Yeah, I see how it reads). To be honest there was never going to be a moment like in the first film when Bryan nails the bad guy in the legs, hooks up the electricity and then just walks out. It is a hard moment to top. This version tries to remind us that Bryan's character is not a monster, although he is a death dealing demon of vengeance. There is some slight hint of the emotional release we want, but it was less orgasmic than I hoped for. 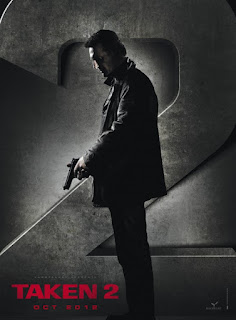 There are some terrific fight sequences. The one where Neeson takes on a half dozen or so of the criminal crew with a piece of a baton or re-bar was exciting and well staged. There were a couple of shootout scenes that had the kind of tension and resolution that an action fan is looking for. The car chase sequences were only mildly effective to me, I think the crowded marketplace setting and the lack of a point of view from the pursuers weakened the suspense a little, but that could just be me. The set up of the story focuses too much on Bryan and his family drama, and not quite enough on the hateful (and should be hated) villains. It still works and an 80% dose of Liam Neeson whoop ass still makes for a great two hours at the movies.

Posted by Richard Kirkham at 1:56 PM