There is so much about this movie that is wrong that it is difficult to say where it goes off the tracks first. SPOILER WARNING: I have consistently refrained from sharing too much information about a movie in my comments. I think when people do that without warning, they are robbing the potential audience of the chance to discover the story and it's surprises along the way. I am going to violate that general prohibition for this movie because frankly, the ending pissed me off and if you have any intention of seeing this regardless of my comments, then you should stop reading now.

OK, Ive decided that the first thing about the film that goes off the tracks is the narration from the female leads point of view. It is so self referential and obviously theatrical in nature that it takes you out of the story immediately. For instance, when she is describing her sexual encounters with the Taylor Kitsch character, she mentions his two tours of duty in Afghanistan and Iraq and says she has orgasms but he has wargasms. Clever?, not at all, it is irritating. She proceeds to become the most irritating character in the movie and she is the one that these two guys are supposed to be so in love with that they will go to the ends of the earth for her. There is one vague reference to her background that might have been an attempt to make us have some sympathy for her, but it goes nowhere. Her character's name is Ophelia, "like the bi-polar chick who kills herself in Hamlet". So she goes by "O". Again, this is supposed to be clever? Again it is annoying to no end and with no purpose.

The two male leads characters are Ben and Chon, which gets us a Cheech and Chong joke and an ice cream franchise joke. Yep, that is the quality of writing that goes on in this screenplay. Aaron Johnson, who was so good in "Kick Ass" and "Nowhere Boy", seems to be sleepwalking through this movie. That is really not a comment on the actor and his ability, that is his character. He is supposed to be low key and zen like. When he is moved to fear and rage in late sequences in the film, all the energy from his character has already been drained of any meaning. The only time his character comes off as real is when he pukes. Everything else in the movie is a movie story convention rather than a real person. At least he had something an actor could work with in that scene. Kitsch has one moment early on when he has to use his gun to show his commitment to his new partners. After that, he is an almost zombie like cypher. This is his third film this year and so far, he is on the brink of becoming the next Josh Hartnett, a pretty boy that Hollywood could not turn into a movie star.

Maybe a big part of my disdain for the film comes from the fact that there is no one to root for in the story. The apparent heroes are "nice guy drug pushers". They are only willing to use violence when it is called for. There is a myth for you, the non-violent drug industry. A worldly former Navy Seal and a Biologist/Business grad from "Cal", are not able to foresee that their little business will bring out the worst in people, especially the competition? The screenwriters and director, want us to believe that once it is all legalized, all the cutthroat (literally) business tactic will go away. After all, these people are not really evil monsters trying to make a fortune off of the misery of others. They are just businessmen and women who have to operate in the culture that the drug industry creates. If you think bank robbers and stick up men are only doing these violent crimes because the citizens and police are well armed, then maybe you will believe this. Salma Hayek's drug lord character speaks the truest words in the movie when she points out that "O" doesn't really have focus because frankly, she has been using since the eighth grade.

As movie conventions go, I know why they use Navy SEALs as the bad ass back up for our witless would be drug kingpins. SEALs are bad ass, they are tough and they are smart and able to do amazing things. They are also the best and sharpest and most dedicated of America's warriors. So while it makes it easy for a fictional storyteller to use them as a prop, it defies reality to believe that five or six of America's finest, self sacrificing, patriotic, warriors would become mixed up in the drug business and murder plots that this film plugs them into. The only motivation they might have is their friendship with one of the lead characters, but that is never explored at all. There are things in this movie that I don't doubt are real, but this plot point is ridiculous.

The movie starts off with a video recording of a Mexican Drug cartel execution of several victims. They are tied up and then tortured and decapitated (thankfully off screen). Later we get to see their heads being played with like soccer balls by the enforcers for the cartel. This is the start of all the gruesomeness in the movie. There are later scenes of murder with a sadistic gleeful bent to it, and continuing threats to family members including children. I know that the drug cartels are capable of horrifying violence to keep their hold over the market and their vassals. Showing this violence without making it mean something, other than "we are evil" seems cruel. There is a disgusting torture scene late in the film which would fit into one of the modern "torture porn" horror films easily. I've avoided all the "Saw" and "Hostel" and "Vacancy" type films because that type of horror turns my stomach but not my fear. Pretty much the same thing happens here, I was repulsed, but since I felt that way earlier, I don't think it did anything to make the film more compelling.

This movie is mostly a nasty piece of business without anyone to care about. All of the characters are unpleasant, most of the time the unpleasantness is shown on screen, and never do we feel like someone is thinking enough to make the story more compelling. The only one-ups-man ship we get is more violence, not something creative. SPOILER ALERT: At the end of the movie, when the inevitable violence escalated out of hand, and everyone dies, it turns out to be a dream by our annoying female lead. Again, "O", shows us why we should not care about her. The film makers go with a "what really happened" storyline where one character goes to prison, but everyone else gets out alive and thrives as a result. Including the most reprehensible character in the movie. Benicio Del Toro's enforcer "Lado", ends up happy and contented, John Travolta's corrupt DEA agent is a hypocritical hero (a political crutch if ever there was one) and the menage-a-trios of our leads have sex in a tropical paradise until they decide if they want back in. Oliver Stone has re-imagined his great screenplay for "Scarface", but in this one, everyone lives happily ever after. 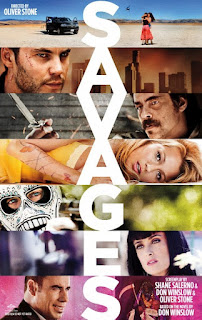 Posted by Richard Kirkham at 12:21 AM

Great review. A lot to agree on. "O" is more annoying than anything else and is far from someone I could see anyone fighting for. As much as a horrible year Kitsch is having, I'm still rooting for him and hoping he is still given a chance to be someone worthwhile with a good script. Johnson is good for the first part of the film but yes, once the violence gets going, everything goes to shit.

So fat the biggest waste of time this year, and I saw the Red Dawn Remake.