After a two week hiatus from movie theaters, I managed to get back into the swing of things so to speak with "The Amazing Spider-Man". This is the kind of big budget, action packed, popcorn film that seems custom made for Summer Vacation and the Fourth of July Weekend especially. I had the chance to see it in a small town theater in Wyoming, but I was simply to pooped out to make it to the one screen theater with the children of my friends. So, after getting back from a long excursion, we ventured out to a Sunday screening, ready to chow down on popcorn and super hero daring do. For the most part it is a successful film that I think will be pleasing to fans of the super hero genre. I am a little less certain that it will have as much acceptance outside of that fan base because frankly, half the movie feels like a repeat.

It was just ten years ago that the first cinematic version of Spider-man hit the big screen. Sam Rami's three films run the range from disappointing to spectacular. The second film stands for me as one of the great comic movies of all time. Both Spider-man and X-Men peaked with the second films in their series. The third film in each series as well as Superman and the first cycle of the Batman movies turned in disappointing results. It makes me fret just a little about the upcoming "Dark Knight Rises". I suspect that Christopher Nolan can break this jinx, and I hope that they don't try to reboot the series too soon. That is my main criticism with the new "Spider-Man". In order to relaunch with a new lead, they have decided to make it an "origin" story.

For the first hour, there is a lot of familiar material. Peter Parker , exceptionally well cast with Andrew Garfield taking over for Toby Maguire, lives with his Aunt and Uncle, is an outsider at school but with a very scientific mind. He gets a "magic" spider bite and develops amazing powers that allow him to joyfully test them in front of our eyes. He begins using those powers to avenge the murder of an important figure in his life and learns that there is a need for taking responsibility. There are only a couple of items that distinguish this origin story from it's predecessor. First, Peter and his parents are given a back-story that connects them scientifically to the corporation that figures so prominently in this character's Universe. I thought that there needed to be a little more pay off in this story of that string. If you stay two minutes into the end credits, you will get a stinger that promises more, assuming a sequel ends up being made. The movie is long, so it may not hold up as well if it gets weighed down with too many sub-plots.

The second point that makes the origin story a little more worthy is that the great Martin Sheen and Sally Field play Peter's Uncle and Aunt. They are a little younger than we had in the first story and that makes their contributions a little more vigorous. Aunt May will be a stronger character in any sequel but Sally Field did justice to what was written here. Sheen gets most of the juice in the early part of the movie. He is wonderful. The way the part has been re-done however, means that his plot-line is not quite as poignant as the Cliff Robertson role ten years ago. The aftermath of his story feels rushed so that we can get to the main adventure in the movie. Also, we just went through this emotional resolution ten years ago so it does not feel as fresh.

I have made it abundantly clear in the past that I am not a slave to the comic books. I have no fault with them but fans that treat the comics as the bible for a film rather than the launching point of a film, don't understand the difference between the two medium. I don't know the story of Gwen Stacey and how important it is in the comics versus the Mary Jane character. Emma Stone is the hot young actress of the moment and she is very effective in the part, but it never developed the epic nature of a romance the way the story had in the earlier films. There was just enough of her character in the story to make her presence important, but some of the coincidences start to pile up and even for a comic based film begin to feel a little contrived. She appears to be the Nexus point for events in the movie for no particular reason except to save time.

The villain also has some back story that was nicely introduced but again felt incomplete. The genetic research makes a lot of sense for both Spider-Man's story and The Lizard. The actor Rhys Ifans does a nice job conveying a tragic history and moments of regret, the one spot that seems least convincing is that of bad guy and most of that performance is CGI. The dramatic section of his story is rushed because we took so long to get there in the first place. I did think that the fight scenes with Spidey and the Lizard were done very well and carried a good amount of surprise and suspense. Most of Spider-Man's special effects look sharper than in the earlier movies, and the color palate hides the cartoony nature of the character in the effects shots pretty well. There were a couple of good #D shots but nothing that demands that you see the movie in 3D. 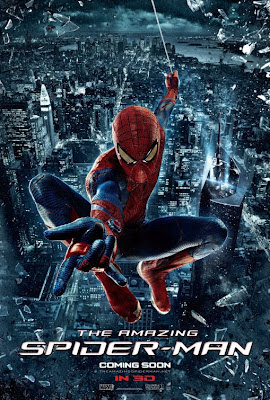 Now that the series has a new lead and background, I think that future episodes will work more effectively because they will not have the shadow of the three films from the first decade of the new century hanging over them. There are enough changes her that loyal film followers of Spider-man will want to see it. There may not be enough that is new for everyone else and I expect that viewers will be happy but not elated with the results.
Posted by Richard Kirkham at 7:06 PM