Joe Johnston is a director that has made some fantastic movies and my guess is that most people would not know his name. He tried and largely failed to make "The Wolfman" a marketable film  after the original director and the star Benicio Del Toro fell out on the vision of the movie. My favorite of Johnston's films is "The Rocketeer" with maybe "October Sky in second  place. Both of those movies have something that "Captain America" needs in spades, and that is a heart that is set in traditional values. Those movies were set in the past and Johnston knows how to evoke that past really well. The first thirty or forty minutes of Captain America consists of images from America, in the process of fighting World War Two. These are not combat images, but looks at the homefront.  New York City is shown to be a tough place to live but also the sparkling jewel that nostalgia wants us to remember. There was not any 1943 World's Exhibition that I know of but New York did have the World's Fair in 1939 and the invented World Exhibition clearly took it's inspiration from the futurist visions of the 39 Fair. The sleek looks of the future were started there and in the movie we are talking about now, they come to life in the laboratory of the American Project, the munitions plants of the Nazi spawned Hydra organization and the cars and planes that are featured throughout the story. The style of Johnston in those places is reminiscent of the Hugh's factory featured in "The Rocketeer", the lighting and angles are evocative of an earlier time when the world was more direct in the way we saw ourselves.

The sense of accuracy starts with all of the usual things that make a movie work. Let me start with something that I can't remember writing about extensively in any of my blog posts before, costumes. The look of America in WWII is found in a thousand photographs of the times. Check a high school yearbook, or view the family album of your parents, or more likely now, your grandparents, and you will find the distinctive clothing. Steve Rogers, our hero appears in simple street clothes that were visible in those photos. If you have a picture of your dad or grandad in uniform during the war, he probably looks like Bucky Barnes, Captain America's best friend. The tweed of Dr. Erskine fits an academic of the day and the military uniform of Peggy Carter is as sharp as the ones worn by Dinah Shore in "Up in Arms" from 1944. Schmidt's car is not real as far as I know, but it looks like a nightmare of power and Teutonic arrogance that could easily have been made in those times. The Bowler hat with the Sgt' stripes worn by one of Roger's team is of course silly, but it looks like it could be real. This is a fantasy that is being run through a prism of reality and our memory of what the reality was. The costume that Captain America conducts his War Bond sales shows in, is the way a hero would be imagined in a 1940's comic book. When the suit gets changed, the alterations are not dramatic but they are practical and they keep the patriotic spirit that the comic character and the movie need to have to work.

The tone of the movie is set early on by the undefeatable spirit of a young man, desperate to contribute to his country. He is not trying to prove himself to anyone, he wants to be like everyone else, a contributor to the defeat of the enemy. There is a key point in the film when Steve Rogers is questioned and asked if he wants to go kill Nazis like all the other men, his answer is what makes him a real hero. The earnest motives and morals of the American spirit are contained in a young man that is not physically able to match those feelings. This is the sign that he is the right man to give this power to.  Everything that precedes the transformation of Steve Rogers into Captain America, is needed to make this story soar as a real character we can root for and not just another super hero to turn loose on the movie screens of the world this summer. There were some hints months ago that the movie would downplay the American exceptionalism that makes Captain America what he is. There was even talk that the movie would simply be titled "The First Avenger", to broaden the international audience. I don't know how the marketing of this movie is going in the rest of the world, but this movie sells American ideals and spirit. Yes, many of those are ideals shared with other nations, as is indicated by the Captain's team, but it matters that he is American and you cannot disguise that in this story or movie. Just as he did in "October Sky", Johnston manages to get real American ideals on the screen, without having to wave a flag. Unless you take a close look at that big ass shield that Cap is throwing around.

My knowledge of Captain America prior to this film is limited to the few comic books I can recall from when I was nine, ten or eleven. There was a limited movement cartoon version of Captain America that I watched along with all the other Marvel characters in the 1960s. I have been singing the theme song for forty plus years, but I am not an expert on the character.

This is the memory I have and if this is not accurate don't tell me. I want the current film to be my standard for what Captain America is. 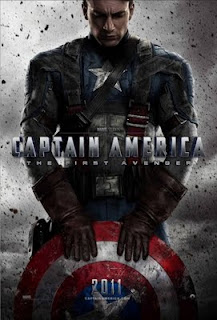 There is plenty of action in the movie, but the action all seems to serve the story and reflect the world that these characters are supposed to exist in. The pacing of the film is steady, it is an origins story so it has all the classical elements of the super hero early narrative. They are not in a rush to get to the slam bang action, instead the story builds and leads us into action that we will appreciate all the more when it finally does show up. The two super hero films this most feels like are "Ironman" and "Superman". We get a clear logical development of the powers that we are going to see like we did in Ironman, and it is backed by the down to earth goodness of our hero and the world he comes from like "Superman". Next year Marvel Studios has a Hero all star film coming out called "The Avengers". We have been getting hints of it in the Ironman, Hulk and Thor films of the last few years. The addition of Captain America makes me want to see this movie more than I ever had before. They have great potential with this character and I hope they don't muck it up and let him get lost among all the other heroes.

The actors do a good job in their parts. Chris Evans is cast perfectly in his role as Steve Rogers/Captain America. The effects work used in the first part of the film is a couple of steps beyond what we saw in "The Curious Case of Benjamin Button". It is much more convincing and less obviously computer generated. Tommy Lee Jones just has to show up and be himself to make his part work, but he does get all the best one liners in the movie so pay close attention when he speaks, all of the verbal humor is in his dialogue. There are some visual jokes but nothing that will take you out of the movie. Everything fits together really well and makes this so far the highlight of the summer (along with Harry Potter).  Watch the credits all the way through for the Avengers teaser but also watch them for the spectacular WWII era art work that is meshed into the film so well. The show tune that is featured in the movie is a perfect fit for the kind of entertainment people would have sought out before Television and the internet. This film recreates a time and place that only the oldest of our parents and grandparents will recall, but it will make it an era that you wish you could have lived in an fought for. It is a comic book tribute to the greatest generation. We can never do them any justice for the burden and sacrifice they bore, but we can cheer on their spirit and the values they tried to save for all of us. This movie absolutely rocks and I can't imagine anyone would not enjoy it.
Posted by Richard Kirkham at 3:22 PM