Transformers: Dark of the Moon

A few years ago we stayed up till all hours of the night to go to a Mid-night screening of the first Transformers movie.  The toys were well after my childhood and came mostly before my kids time. Also, they were girls and we had a lot of pound puppies and unicorns around the house. We did not know what to expect except space robots that turned into vehicles. That movie turned out to be loud and stupid and much more fun than it had any right to be.  Shia LeBeuof was starring and we barely knew who he was much less how to say his name. Megan Fox was just a picture on a poster, who knew she was about to become an "It" girl. Here we are six years later and I'm sorry to say, Shia is a household name, but not yet a great actor, Megan Fox has dropped off the radar, and the Transformer movies are as stupid as they ever were but they have lost the charm they once contained.

Many on line sites have been very supportive of this film, especially in comparison to the second movie. As far as I was concerned they both had the same weaknesses that made them inferior to the first film. The stories are overly complicated, the action is bigger, louder and less clear. The humor in the movies has gotten overdone and does not seem genetic to the films or the characters. "Dark Side of the Moon" starts well, goes off the tracks and then recovers a little with some spectacular scenes of Chicago being destroyed. Other than that it has little going for it.

I always knew the formula for Michael Bay photography and storytelling. I've seen almost all of his movies and those that he has produced but not directed himself. After watching "Team America", it is hard to get out of the formula and just concentrate on the story. Since the Transformer Movies largely consist of the same story repeated over and over, there is not enough to distract from the overdone slow motion, sun drenched heroics with matching score. It has become a exercise in watching the cliches and wondering if they will stick out too much. They stuck out plenty in this movie, but fortunately we waited until enough other films were in 3D that we could see this in a standard screening. Otherwise the visual hokum would be intolerable. This movie has been out for three weeks and I was surprised at the number of people there for a weekday afternoon screening. It was not packed but the audience was enthusiastic. The kids behind us were not taking any of it seriously, but they did suck in their breath at some robot punches and they cheered the destruction of the appropriate Decepticons.

John Malkovich is in this movie for no reason whatsoever. Francis McDormand is also in the film and while she is a little more relevant as character, I am not sure why they needed her as an actress. She brings little of the steely resolve she is known for, she is slumming in an underwritten comedy part. However compared to Malkovich, her part is complex. He has no relevance to the story, adds nothing interesting to the film, and his mugging which can be hysterical in the right movie (Burn After Reading) was just annoying here. John Turturro was on the radio the other day promoting another project and he sounded so bright and engaging. It is sad that he has to pay the bills doing nothing work like this. There was a humorous story line with his character in the first movie, but here it is stretched to buffoonery.  The one great appearance in the movie is by Buzz Aldrin, a real American Hero. The Apollo program is integrated into the story in a clever way, and then all the inventiveness goes out of the movie. 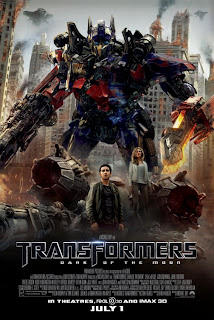 There is nothing wrong with a dumb summer movie, but this one just feels redundant and convoluted. I like watching stuff blow up as much as the next guy, but there ought to be a reason for it. Here the only reason is to get your money. We get a sucker punch joke about Obama being the one to award Sam his medal, and there is a quick Star Trek joke based on Leonard Nimoy's voice work in the movie and a line from some of the Star Trek films. Except for the set up and Buzz Aldrin, this movie makes only a token effort to be better that the widely flogged Revenge of the Fallen, and is not close to the first movie in gee whiz charm. Enjoy it for what it is but don't expect to remember anything about it afterwards, it is quickly digested. I hope for better with a couple of upcoming big summer flicks.
Posted by Richard Kirkham at 9:18 PM