OK, I'm going to be honest with you. Tonight at midnight, I will be lined up with millions of crazed Twihards seeing Eclipse. My darling wife won't wait and I'm not sure that I want to yet concede that I am too old to be staying up all hours for a movie opening. I enjoy the Twilight movies as much as any man can but they are really the territory of my wife. I would gladly be seeing the new James Bond movie at midnight but dammit there won't be one for at least two more years. So I came home today and took a nap instead of putting in my movie right away. Now, if I tried to watch a film, I'd be a dead man. I stopped writing just now to resolve a whole bunch of those issues related to going to the movie, at this point Dee is in the theater, Amanda is here with me and we will head back over to the Vampires at 11:00.

So in order to keep up with the Movie a Day concept, I am posting about a film I know so well that I feel confident about it without having just seen it. "The Spy Who Loved Me", is our AMAD subject. This film came out in the summer of 1977. Anyone who knows 70's films will tell you that the summer of 77 belonged to only one movie, and this was not it. The funny thing was that this was the biggest Bond success since Thunderball 12 years earlier, and there had been 5 Bond films in that time period. This was Roger Moore's third time out as Bond, and the movie that really established his mark on the franchise. I will be talking about one of his earlier 007 appearances later this summer. Although it might have been overshadowed by one of the biggest cultural phenomena of all time, people still remember this James Bond film.

The first time I saw it was with Dolores at the Twin Theater complex outside of the Cerritos Shopping mall. Inside the mall was a multiplex of six small movie screens but the complex outside was much more a movie going experience because the two theaters held at least 500 people each. Later in the summer we went back and saw the movie there again when Art was home for a short leave. I miss my friend every time a new Bond film comes out because it was such a big part of what brought us together. He read all the books also and after we were friends, we saw every new 007 adventure together. There is a better Art story for Moonraker, which I will save for that posting.

The Spy Who Loved Me had the best pre-title sequence of any of the films up to that point. It climaxed with that fantastic shot of the Union Jack floating across the snow capped mountains of Austria. If you have never seen it, I will not spoil it for you but it kicks the attitude of the film off perfectly. This is spectacular nonsense done with flair and showmanship. The rest of the movie lives up to it. They built a sound stage for the movie to shoot in, which became "the" place to film. It was used for the Superman movie, Spielberg extravaganzas, and of course for that film series that started by overshadowing this James Bond picture. It has burned down twice but has been rebuilt each time and it remains the largest sound stage in the world. 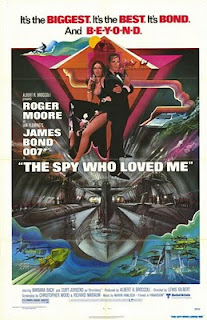 They needed that space for a climatic battle featuring two submarines that are supposed to be contained inside of a supertanker. In essence it turns the formula of these films a little inside out. Instead of trying to penetrate the impregnable fortress of the enemy, Bond and his allies are trying to break out. There is a gun battle, and explosions and the evil villain escaping to be confronted later in the movie. You can tell where all the money spent on production went in this movie. The art design and location shooting is really strong. I don't know if they have a dramatic light show at the Pyramids at night but this movie makes me want to go and find out.

As I said before, this is the Bond that Roger Moore should always consider the gold standard of his seven turns at bat. He looked great in the suits and jackets that are styled in a 70's form but do not look cartoonish today. People often complain that Moore never seemed threatening and dangerous like Sean Connery had. They are right, but as perfect as Connery was as Bond, Moore was for the Bond of his time. The humor was not strained, the quips came easily to him and he was clearly a Brit. There is a good moment though that shows that this Bond is tough and merciless when it suits him. As one of the heavies he has been fighting clings to Bond's tie as he is falling back from the edge of a high balcony, Bond presses the situation to get information. Once he gets what he wants, he swats his tie back, basically killing the bad guy with the back of his hand. That was a bad ass moment that went a long way in establishing some tough guy cred for Roger Moore's version of Bond.

The movies go a little over the top after this outing, and they do come back to earth again, but this is the quintessential James Bond film of the time. At the end of the credit crawl, the 007 movie announced the Return of James Bond in the next film. This movie ended with a promise for "For Your Eyes Only", but the success of that other 1977 film actually caused the producers to renege on their promise and Bond came back in the space based adventure Moonraker. Not hard to guess why they thought that was a good idea. By the way, the British based American actor I mentioned in the Rollerball post last week, has his second biggest part in this movie as the American submarine captain. Shane Rimmer is going to be the answer to a trivia question someday and you will thank me for mentioning this stuff.
Posted by Richard Kirkham at 7:37 PM