I worry a little that we may be peaking too soon. This is the ultimate movie experience from the last summer of the 1970's. There is literally not a single element of this movie that needs to be changed. I saw the revised director's cut a few years ago and it was fine, but it did not add anything essential to the movie. As it is, there is suspense for two hours, while you are in the company of great characters and a old story told exceptionally well. I remember reading when the sequel, "Aliens" came out, that the comparison between the two films was that the original is a haunted house story and the sequel a roller-coaster. I guess I can accept that as long as you accept that when done well, a haunted house story is is a very efficient tool for creating screams and fright.

Alien is iconic. There is not really any need to remind people of the story, the title probably tells you enough to know if you want to see it, and then when you hear it is a horror film, that should seal the deal. Whenever awards are given out, horror movies have had to stand at the back of the line. It is easy to say that the material is lurid or to describe it disparagingly as a "genre" movie, Alien defies those stereotypes. It is about fear, and it is set in a science fiction universe, but it is a well written story with a killer concept. So many things could go wrong and you would end up with a cheesy pile of nothing special. None of those things went wrong. Let's start with the production design of the film. This is one of those movies that pioneered the concept of used space. In other words, the future is not all sterile and anespetic , it is in fact lived in and worked in. The "Nostromo" is on the outside dingy ans scorched. While there are futuristic sterile images in the kitchen and the suspended sleep chambers, the rest of the ship looks like it could be a local garage, with low light, leaks, grime and close quarters everywhere.

Back in 1979, when the movie was a success in theaters, I remember reading a piece in the LA Times, that talked about the allegories of rape and pregnancy in the movie. The author wrote about the set design of the derelict vessel that the crew goes to investigate, and how it resembled the reproductive system of a woman. The ridges and framework, combined with what looks like a moist wall covering, are certainly derivative of some of the physiology involved. I did not become one of the geeks that were hung up on the drawings of H.R. Gieger, but I can see how people would make such a leap based on other art from the man substantially responsible for the look of the movie. The other themes of penetration and birth are pretty obvious. At the time, I thought the article was written by someone who must be trying to get some notice in academic circles for their feminist slant on things. That is probably my opinion still, but it does not make them wrong in this case. 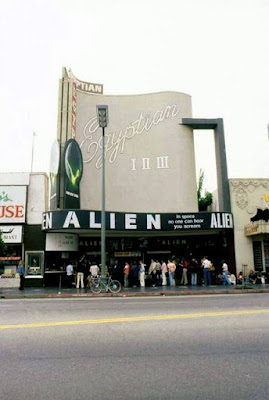 As I have mentioned in an earlier entry, 1979 is one of my favorite summers because of the life I was leading at the time. Alien came out at the start of the summer and I must have seen it a half dozen times. The first two or three times I saw the movie were at the Egyptian Theater on Hollywood Blvd. I guess being older and living outside of the main city area has reduced my visits to Hollywood Theaters over the years. Once upon a time, Hollywood Blvd. was a mecca for film lovers because movies often opened in limited engagements and those were usually in Westwood or Hollywood. My Dad had always taking us to Hollywood for business reasons. At one point he had a Magic Shop on the third floor of a building on the Northwest corner of Hollywood and Cherokee. So, I loved seeing a movie in one of the big Theaters on the Blvd.. I think we saw Alien with my friend Art and his future wife Kathy, at the Egyptian. I remember going to "Peaches" a record store just a few doors down from the theater and seeing the display for the new Kiss album "Dynasty". Of course I had to have it then, so the copy of the LP sitting in a box in my garage right now came from that day. The movie of Alien features music by my favorite film composer, Jerry Goldsmith. I love John Williams and see him at the Bowl every year, but Jerry Goldsmith was the first composer I knew by name because his music for "Patton" so inspired me at age 12. The main score is hypnotic, but there are also dramatic, furious action cues in a number of places in the film that are also memorable. 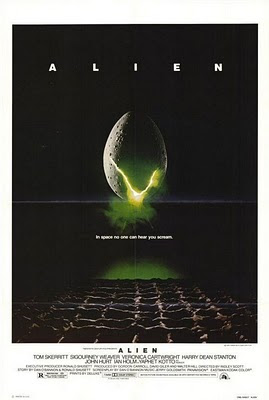 I can't imagine finishing this post without mentioning the ads for the movie Alien. I chose to watch this today, even though it is early in the summer, because I came across a website I bookmarked a year ago The 50 Greatest Trailers of All Time - Lists - News - IFC.com.On the top of the list was the trailer for this movie, and I agree it is one of the best previews I ever saw. There is no dialog and the trailer ends with the tag line that everybody know, even if they never saw the movie. All I know is that they may not be able to hear you scream in space but in Hollywood in the Summer of 1979, everyone could hear you scream because you were watching Alien.
Posted by Richard Kirkham at 1:09 PM

Do you remember the night we were all out to dinner, with ALL the kids, and D said: "In the Spaghetti Factory No One Can Hear You Scream".

Top-10 dinner memory and Alien makes my top-10 movie list. We saw it with John and Ronda; John F was clinging to Ronda, Ronda spent the movie clinging to John Y, he was clinging to me. And we all jumped simultaneously.

That's why I married her, If I can't come up with the pun or line, she will.

Your Alien entry coincided with Hugh Hewitt's top ten female movie list being announced on Friday night in honor of the republican nominees. They picked Aliens as number 1. Since we are operating at the whim of Blockbuster, when they were out of Alien we didn't feel too guilty renting Aliens - loved it all over again, although JY once again spent the moving clinging to me ... But that have been because all the kids were out.

I liked this post more for the personal history than the movie commentary! :D Must have been awesome growing up around that area... you definitely made it sound cool! I remember that Kiss album. The last one before "Unmasked". :)

Meanwhile, Alien is an iconic film, no doubt about it. And it does prey on the sexual and reproductive fears of the audience. To great effect. I dont know if I'd go far as to talk about the Alien ship as an allegory for the reproductive system, but then again, I guess i hadn't thought of it!

Great discussion of Alien. I love the history behind your first viewing of the film and it really highlights the magic of movies, something that's slowly fading in the world today. Goldsmith's score is brilliant and unnerving and it's constant "drone" leaves you uneasy and at the edge of your seat, along with the horror of the actual film.

p.s., I'm decidedly mixed when it comes to Ridley Scott's director's cut. Some things work, or are enhanced, but others I say, no, no, no. The theatrical cut for Alien still stands the test of time. I'm the other way with Cameron's DC for Aliens, though. The latter is the definitive for me, and I can't go back to the theatrical version.