Spoiler Warning!!! if you watch the Trailer Before the Movie, Some Secrets Are Revealed, the same goes for the poster image.


I got to this one a little late in the day. One of the reasons I picked it was I thought it would be relatively brief. It was just over two hours so my memory is clearly fuzzy on this one. This was an August 1976 release, so it is possible that I saw it with Dolores but that seems less likely than I saw it with someone else. It might even have been a movie I saw with my friend on the USC Debate team, Jon Cassanelli. We hung out a lot during this summer, getting ready for the next year of debate.I was at his house in North Hollywood a lot that summer. We sat at a partner desk and did research, typed briefs and tried to stay cool. The main reason I think he must have been the person I saw it with, was that it was the kind of film he would like. It is not very serious, had some fun lines and bits of business and I think we may have gone to a multiplex in the valley in search of better air conditioning.

This is a sequel to the more well known "Westworld". The rights must have belonged to someone not at MGM, because this is an American International film. They were famous for drive in exploitation and cheap European dubbed cinema. While this is clearly not a high budget production, they get a lot of bang for their buck. There is a clever sequence involving holographic chess, that is a year before the scene in Star Wars on the Millennium Falcon. The special effects are not amazing as they were in Star Wars but the concept is well executed and it fits with some of the other material in this section of the film pretty well. Most of their money probably went to Yul Bryner, to get him to come back and play the role of the iconic robot gunman from the original film. He is only in the movie for one five minute scene, and it is a dream sequence that has nothing to do with the story except it showcases the machine that the bad guys can use to get all of your personal information. There is probably a reason that the female character has a sex fantasy related to the gunslinger, but it is not really explained. Early in the movie a comic character, who disappears after the first half of the movie, talks about robot sex and even asks our heroine if she is going to try it. This may be the source of the dream, but it gets Yul Bryner in the movie and allows the filmmakers to use his image in the advertising. 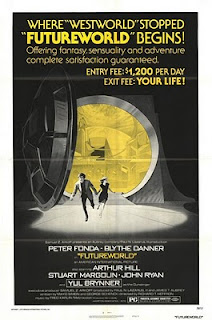 If you watch the trailer or see the movie poster, you will know the secret plot of the movie much sooner than necessary. Amanda had not seen either and while we were watching, she was creeped out by a couple of the things that are going on and she was in suspense as the story unfolded. She did not know where things were headed and it kept her in the movie. Another thing that might have helped is that she has not seen all those other films from the 1970s where there is a conspiracy to do something terrible and political and the journalists are the Hero (Capricorn One, The Parallax View among others.) So this movie does march out a bunch of familiar tropes from that time period. After the stuff that happened in the 60s and 70s, everyone was a little paranoid and looking for trouble. I hope we have gotten over that, but I still see those 911 truthers selling books and see people posting on news sites about the space program that deny the moon landings. I guess paranoia isn't going to disappear, but it is less part of the popular culture than it once was.

There have been attempts over the years to re-make Westworld. In fact, I think there was a script and pre-production and casting but the green-light went red. Arnold was going to play the gunslinger, and that might have worked because although he does not look much like a cowboy, the robot part fits him well and he has no lines. Futureworld is not likely to get remade, although it is not a bad idea. It was not a big hit, it has largely been forgotten, and there are technical advances that would make it a very interesting movie. As I said earlier, they did get a lot out of what they spent. The film does not look cheap, but there are very limited effects. I did think that unlike the original Westworld, the things to do in the differnt parts of the Delos Park this time, seemed more intriguing.

Blythe Danner is the female lead and she looks very much like her daughter, Gweneth Paltrow in a couple of scenes. Her big dream sequence is sexy without having much sex in it, and she carries off the showdown she has at the end pretty well. Peter Fonda is OK, but fairly standard issue. After the clunky opening set up of the mystery, he settles in nicely. There are not a lot of movies that end with a middle finger being slung at the antagonists, but along with Easy Rider, Peter Fonda is in two of them. Arthur Hill, who seemed like he lived at my house in the 1970s because he was on so many TV programs and movies, plays a pretty familiar genial on the surface but not very trustworthy otherwise character. Hal Holbrook could easily have replaced him and I would not notice. They must have auditioned for the same roles all the time in the 70s. Also in the film is Stuart Margolin, a TV actor that showed up in movies pretty regularly. If you ever watched the Rockford Files, he played Angel, Rockford's weaselly friend. He is also well cast for his part.

This is another one of those high concept science fiction movies from the 1970s, that existed before the term high concept was widely used a few years later. It is not as great as Soylent Green or Capricorn One, but it will entertain you for a couple of hours and that's what Westworld and Futureworld are all about (just remember that the people you watch this with are not sex robots waiting to entertain you after the feature).
Posted by Richard Kirkham at 9:38 PM