The LAMBCAST will be featuring "The Evil Dead" Franchise as our Halloween Horror lookback episode of the month. Recording is tomorrow but I just spent two days catching up with all four theatrical films and thought I'd put my notes down in a supplemental post for readers of this site.


I'd seen Evil Dead II before I saw the original, and I'd been told that the film was basically a remake of the first film. I would disagree to a large extent. The original Evil Dead is a straight horror film with a huge amount of gore and imagination to drive it. It practically invented to "Cabin in the Woods" trope found in so many horror films. Although the story is basically the same, it is told in a vastly different manner and should be approached as a distinct piece of work from the two "sequels". 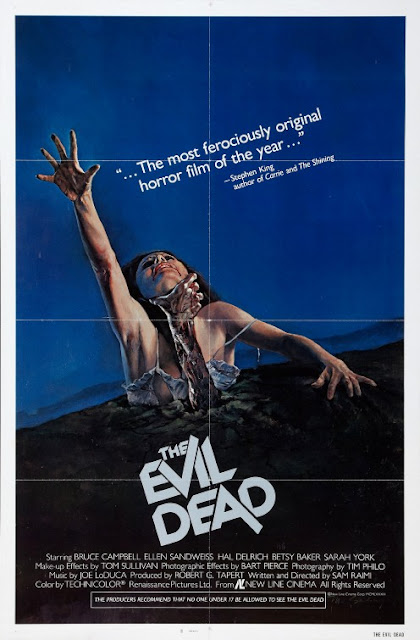 The inventiveness of the film is certainly due in part to the budget restrictions of Sam Rami and his partners. Creative camera shots and vivid makeup effects mark the film as being distinctive from most horror films of the era. The cast feels haunted before they even get to the cabin, based on the way they are shot while traveling in the car to their weekend location. The stop motion animation that caps off the climax of the film uses very basic tools that require patience and a clear vision. It may look a little cheezy by today's standards but it works.

Bruce Campbell is launching his acting career with this movie and you don't see the cocky smart ass that he plays in most of his subsequent roles, but rather a more simple male lead. He was clearly abused by the effects team and I suspect his weariness reflects not just the character but the actor's real situation. Many be the most memorable incident in the film and the whole series is the "rape" of Cheryl  by the possessed trees of the forest. It is disturbing in the imagination, but much less graphic and exploitative than it might have been in another film.


So this was my gateway drug into the series, first experienced on home video at a Halloween party after all the small children had gone to sleep. This is the place where Bruce Campbell creates the character of Ash as the real star of the movie. His monologues with inanimate objects, and his moments as possessed Ash are very memorable. This is where the Chainsaw becomes a part of his body and he becomes a ninja warrior against the dead. 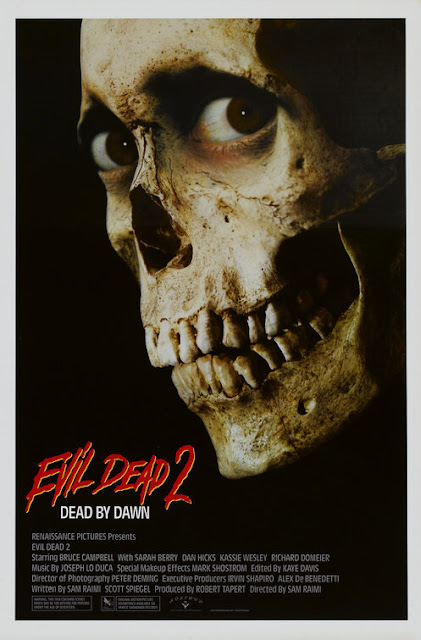 While still full of horror, the film can rightly be classified as a comedy because of the consistent use of humor. Rami's sped up camera work and point of view material supplements the Dutch angles of the horror original with a hyper realized sensibility that is slightly silly and easy to fall into rhythmically.   The whiplash dialogue responses of Ash to moments in the film also accelerate it's tempo, making it a more frenetic experience and again, a lot funnier. There are a couple of quotable moments but that line of delight waits for the third film to turn into a tidal wave.

Once again, the horror aspects are highlighted by very good 1980s practical make up effects. The reason these 80s films hang around and are beloved by so many is that they seem real. This is not a computer generated cartoon of a movie, these actors had to look this way as they were filming and their performances are more manically gleeful as a result. Everything in this film tries to double down on the original. Instead of calling this a sequel, we should rightly classify it as one of the original reboots of a concept. The events of the first film are never referred to, this is a first time experience for all of these characters. Instead of a group of five friends, it is a collection of sets of people who encounter the Evil Dead and respond in different ways. This adds a little culture clash to the humor as well.

Bonus: Here is a shot of my Special Blood Red Edition of the Laserdisc 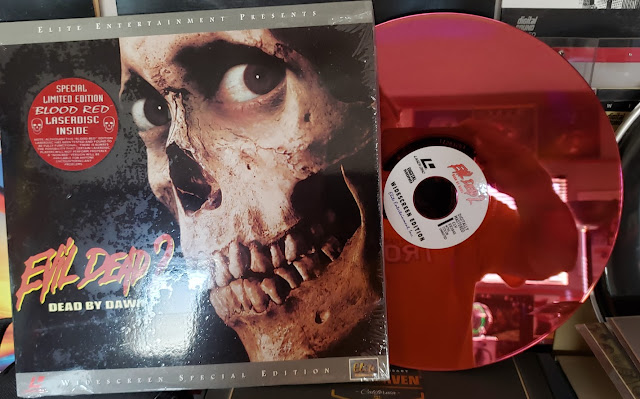 
You can almost exclude this from the horror category, it is an action/adventure comedy with horror elements but it really is a far cry from either of the first two films. The budget is bigger, the action is bigger, the cast is bigger and Ash's ego is bigger. Universal did not want the film to just be seen as the third in a franchise that was not necessarily that big to begin with. So they changed the title and forced some other alterations on the original version. Most cinephiles loathe when studios interfere with the director's vision of the film, but sometimes they are right and this is one of those cases. 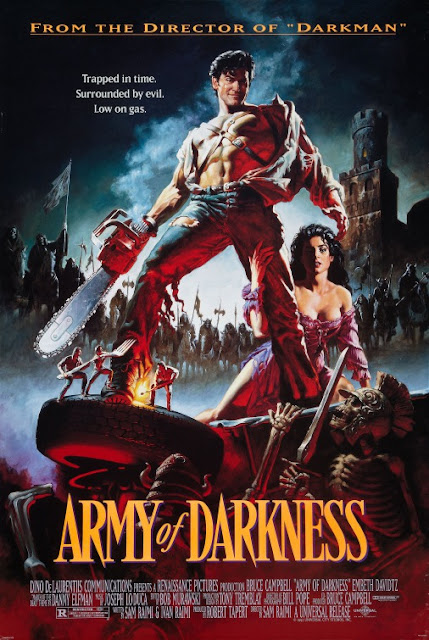 For instance, the end of the picture was re-shot with an action sequence and some comedy that was more in line with the film we had seen up to that point. The original post apocalyptic ending feels like a retread of the ending of Evil Dead II, landing Ash in another location for further adventures. Rami and company were forced to come up with some things that fit the spirit if the main part of the movie, and "Hail to the King,baby" is the perfect exit for this character in this storyline.

I have always been a sucker for stop motion animation and effects. The Ray Harryhausen films and the original King Kong were my idea of perfect special effects. This movie uses a little of that technology, a lot of rear projection, some costuming and make up and a large amount of puppetry to achieve it's goal. This film is goofy fun, through and through. Bruce Campbell becomes the man-god that will be his persona for the remainder of his career, probably preventing him from achieving legitimate stardom, but projecting him to the cult deity that he remains today.  For a more elaborate discussion of this film, feel free to look at this other post:  Army of Darkness.


This is a complete do over of the concept and it was controversial as a result. There is no Ash, and the comedy elements are all gone. What you have here is a reworking of the original premise as a contemporary horror film, but done in the spirit of the original. So the question is simple, does it work?  Hell yes! 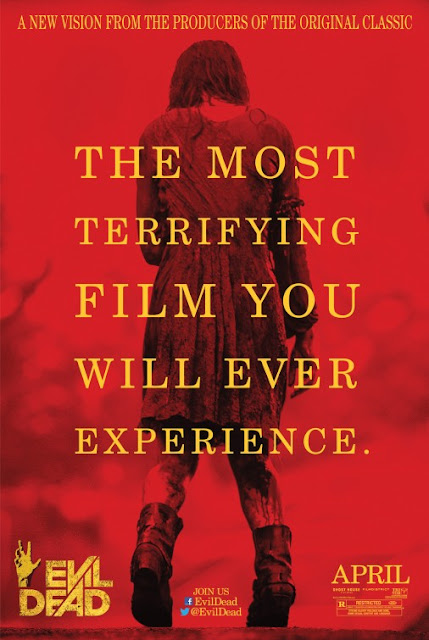 When I see a horror film, I want to be scared. This movie scared me. I like 70s and 80s gore films, and this movie replicates and expands on those approaches with copious amounts blood, guts, vomit. dismemberment and simply sick special effects. One of the things that was most appealing about this version is that it eschews the use of CGI to achieve it's results and instead relies on the traditional make up and effects magic which made those early films so memorable. There were many times when I needed to draw a breath or turn away from something that was taking place on screen.

There was also an effort to update the movie in a way by changing the reason for the group being at an isolated cabin from a leisure activity, to a drug intervention. The members of the group have had good relations in the past, but they are severely strained by the current circumstances. This adds to the drama and it also creates some justification for the slow reaction to the supernatural events that begin to happen.

One thing that is a little different, the protagonists develop a plan for trying to get through this. It is nuts, but you can tell that it was justified by the characters in the movie and it seemed reasonable under the circumstances. All of these kinds of movies have to be taken with a grain of salt. You cannot patch a chest wound to the lungs with a band aid and if you cut off a body part, you will bleed to death without some sort of tourniquet. There is a nice emotional undercurrent to the film as well, one that concerns family and not just horror. If we can't see some human connection between the people in the story, they will be cardboard figures to cut down. That is a problem that so many horror films don't overcome, but I thought this one did. [My original review from 2013 is here.]

Posted by Richard Kirkham at 8:58 AM