There are haters out there who have it in for Tom Cruse. Something about his personal life, or his good looks, or his incredible career just sets people on edge for some reason. Well if you are in that class of people get ready for more reason to hate, because Tom Cruise has a new film that will piss you off because he is good in it and it is a big success. I don't know what the financial return will be but the accomplishment of the film is something to admire and the performance of Cruise will remind everyone that he is talented and as charismatic as all heck, despite the whatever personal baggage the haters want to make him carry.

In anticipation of the summer season, I heard people ho hum this movie. "Another Tom Cruise Action film" big whoop. I just looked at his list of recent films, of the last five which arrived since 2010, four were very solid and only one was a turkey. That's an .800 batting average. In the major leagues that puts you in the Hall of Fame. True, only one, the fourth Mission Impossible, will be a home run, but all of the others were solid singles or doubles. The guy has proven himself time and again and waiting for him to fail is a pastime that people should give up. I've heard the names of several actors who are up and coming, or were at one point, as the next Tom Cruise type. All of them are good actors with quality parts under their belts, but none is even close to the consistency and quality of Mr. Cruise.

Having outed myself as a Tom Cruise fan, let's talk about the movie. "Edge of Tomorrow" is a science fiction action flick. It's already sitting in my breadbasket with that description. It is also intelligent, fresh, and extremely well made. One thing it has going for it is that it is not a sequel and it does not lend itself well to serialization. It is a stand alone film that tries to do something somewhat original. Maybe that sounds strange since the movie has been described as "Groundhog Day" meets "Halo", but it sure feels original despite those comparisons. The science fiction gimmick that provides for the plot twist is original. The relationship between the two main characters is original. The performance of the star is original as well. Cruise plays craven rather than bold. He is cocksure but out of his depths and he makes some strong choices to show that. He starts off in what he sees as a position of power and quickly discovers his powerlessness. The terror in his eyes is real as his character Cage, is required to become something he has never been, a sincere and dedicated soldier. He overplays his P.R. creating hand and ends up on the front-line of an invasion of Europe, very similar to D-Day, on the 70th anniversary of that undertaking. He is the incompetent version of Tom Hanks in "Saving Private Ryan". It is only through an accident of battle that he acquires the ability to reset the day and live it over, hopefully changing things for the better.

Unlike "Groundhog Day", this repeated experience has nothing to do with his journey as a better man. That does happen but it is a by product rather than the purpose of the technique. Cage's real journey is one of victory over an invading force that threatens the planet. His "gift" is a stolen secret of the invaders that allows them to anticipate every action of the Earth forces because they have already experienced them before. Of course, if you start pulling too hard at the treads of any time travel story, you will start to find imperfections, the most successful of these stories work because you are too busy enjoying the events that worrying about timelines, logic and means becomes unimportant. "Edge of Tomorrow" manages to do that by surrounding the character with state of the art special effects, effective action sequences, and enough colorful characters to distract but not pull you away from the central plot. Rita Vrataski is the heroine of the Earth forces. She is known for leading them to their only victory in the war. Emily Blunt, in a departure from the characters she has played in a dozen movies I've seen, is a hardnosed battle weary figure, who does not suffer fools gladly, and Bill Cage is a fool at first. She turns out to be one of only two people in the world who know what is happening to Bill. She becomes his focus and his bane. The reset button on the time travel concept being his death. She sometimes seems to be a little too happy to hit that reset button. These two actors build a believable relationship in unbelievable circumstances.

The other soldiers in Cage's squad get just enough character to be distinctive and to give us some reason to care when they become part of the plot and not just background. Bill Paxton plays against type as the humorless tough Sargent that every military based film has ever had. Usually he is the craven soldier, faking bravado for his brothers in arms. Clearly he knows how to become a hard ass and in spite of his tough demeanor, his reactions create some of the humor in the film. Brendon Gleeson is equally without humor, and it is easy to see how men like Sgt. Farrell and General Brigham would despise Major Cage and are all to happy to see him put on the front lines, knowing he will die almost immediately. The Major Sargent and the General are military professionals engaged in a serious endeavor, Cage is play acting at being an officer and undermines the cause. They become obstacles themselves to winning the war because they have been exposed to the creature that Cage was once. Only Rita sees a new man every time she encounters him. It is a strange relationship that the two have to navigate as they become close and understand one another, only to be forced to start over again and again.

When the film first came on my radar, it was known by the title of the manga book that it is based on, "All You Need is Kill". That is a great title and I thought that changing it reflected a lack of confidence in the material and the audience. "Edge of Tomorrow" sound nondescript by comparison. As I watched the film however, I realized that the title really does reflect the theme of the movie more that the original. It is a clever recognition of the time element in the story and the dangerous situation the characters face. Sometimes the marketing department has a good idea, and when that happens they should get credit. I also love the tagline on the publicity material. The shampoo like directions "Live. Die. Repeat." contains enough of the concept to make it intriguing and the movie does that really well. You wo't feel the repeat sections with discomfort because they are subtlety changed at first then they are truncated and finally they become mere punctuation points to the story. 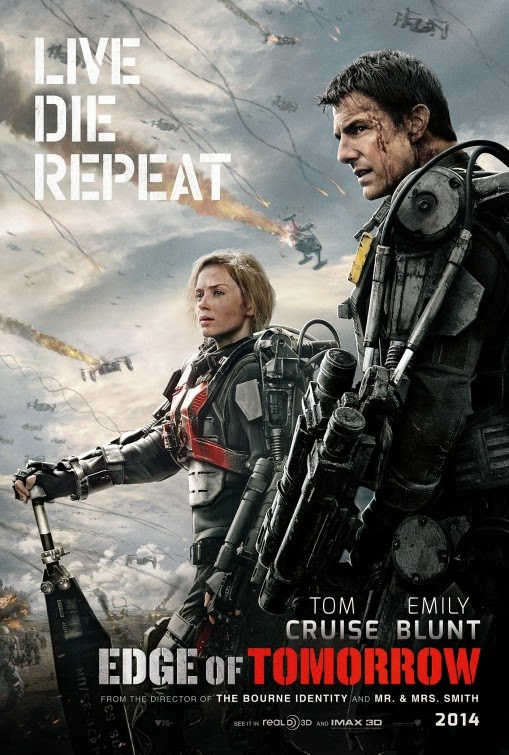 The action sequences looked amazing and they might be even better in the 3D format that the movie is being pushed in. We saw a regular screening and the shaky cam during the battle could be vomit inducing so in 3D it is probably more so. I liked that this is an alien invasion movie that is not all about showing us the destruction of buildings and mass deaths. Those are implied by some of the scenery and backgrounds, but the movie, while having some dramatic battle scenes is not really focused on destruction as much as it is focused on a pretty creative idea. The stars do a good job portraying their characters, and the big star, fills the screen with his presence and shows that Tom Cruise is still a force to be reckoned with.
Posted by Richard Kirkham at 10:36 AM

Says something about an actor with such polarizing perceptions when you have to 'out' yourself as a Tom Cruise fan. It's a shame when outside factors such as relationships or scientology get in the way of why we're here, good movies.

I'm happy to focus on the movies and leave the personal stuff out of it. I try to do that with political differences as well. Look at the 2 Hours of film, and let's experience that.