I had every intention of doing a post on Blade Runner next as part of the retrospective of the Summer of 1982. One of the bloggers that I follow reminded me on his page, what a great year the Summer of 82 was. His list of Top Ten Films from that summer would do any pop movie lover proud. I think both of us would agree that Ridley Scott's Blade Runner was the most influential film on the list. But her's what happened, I started surfing on my satellite channels and Rocky III was starting at that very moment. It was on the list and I have not watched it in at least a dozen years, maybe more, so I committed to the two hours and soaked up the early 1980s feel of this Sylvester Stallone Directed sequel.

Stallone wrote the original Rocky and the story of how it became a film that he starred in is legendary. He came back to this character repeatedly during the eighties and ran it dry by the time we get to Rocky V. The first three films in the series are the freshest and most soul satisfying. When Rocky Balboa came out a few years ago, I think he managed to redeem the character for one last hurrah and put the character to rest with some dignity. Rocky III is the commercially and artistically successful middle story. I was disappointed in Rocky IV which felt manufactured to me, and I barely remember the fifth one. My comments on Rocky II can be found here.

Eric's blog post on Rocky III, seemed dismissive to me. His main criticism being the acting in the film. He does however point out the great emotional punch that comes from the resolution of Mickey's storyline, and I think Burgess Meredith sold that pretty well. The charismatic Mr. T makes his first movie or TV appearance in this film and he is a character you love to hate. Clubber Lang was Mike Tyson before Tyson was Mike Tyson. In addition, Clubber lacked the charm of Mr. Tyson as a boxer. His voice was as scary as his looks were. The small amount of time that was spent on his backstory is told primarily through montages during the story. We see him growling in the background while Rocky defends his title against lesser contenders. When their first match is set, we can see the loner hunger that drives him to be the animal he is in the ring. This was solid movie storytelling, showing instead of telling. It built up an antagonist for Rocky to have to measure himself by.

The three act structure of the story is really apparent, and the best acting moment comes at the conclusion of act two. Adrian has had little to do up to this point and Rocky's self doubt is preventing him from committing to the rematch the way he needs to in order to succeed. She gets a very good scene in which she gets to confront those unexpressed doubts and put them up for the audience to confront as well. The dialogue is not perfect but the tone works and Talia Shire sells it enough to justify the next moment, the start of the third act. Stallone is no idiot, he knows exactly what emotional button to push then, and we get the more intense training sequences underscored by the triumphant horns of the original theme song from the first film. At that point what follows is inevitable but it was also very satisfying. We have been hooked for an hour and a quarter and now are ready to be reeled in in the last twenty minutes of the movie. Stallone's performance may be the weak link here, but I think it is due primarily to the bad haircut that Rocky sports for the whole film. Only during the last fight does he start to resemble the palooka we fell in love with in the original film. 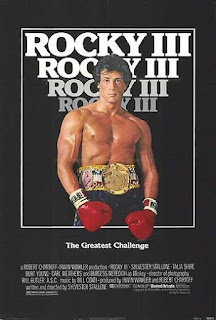 Rocky III is not a great piece of art but it is a rousing piece of entertainment. It lacks much of the grit that both of it's predecessors had, but by switching in a new opponent and creating a different relationship with Apollo Creed, it manages to have some solid emotional heft to it that goes beyond the fight sequences. Of course the fight sequences are staged the way we always wish a heavyweight fight would be, with two aggressive opponents willing to trade vicious blows and keep on fighting.  This movie also features the second of two great music themes from the Rocky films. Both the original title score and the rock anthem "Eye of the Tiger" have been used by sports teams and competitions of all kinds for the last thirty years. The movie may feel a little dated in the directorial style of Stallone. He is very straight forward and direct, but the music cues are timeless and we get to enjoy our hero one more time .
Posted by Richard Kirkham at 11:12 PM

Even as I continue to fondly remember the great summer films of 1982, I can also hear the great rock music of the time playing on the radio and MTV, which was still less than a year old. Long live ASIA, QUARTERFLASH, THE STEVE MILLER BAND, JOURNEY, TOTO and THE j. GEILS BAND!