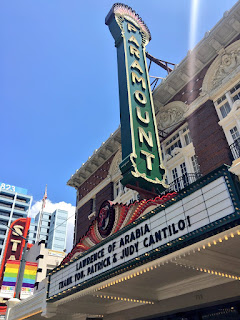 As usual, when Lawrence of Arabia is playing on a Big Screen, I want to be there. This was my second visit to the Paramount Theater in Austin and we took a different approach this time. Choosing Orchestra seats, we watched the movie from an appropriate perspective and got to enjoy a different view of the theater.

Again, it is a beautiful classic movie palace and I expect as the year ends, I will be joining the organization that maintains it. Memberships have privileges, but I do want to see that the programming is going to continue, even with the Covid restrictions.

Having written about this film a number of times, it is challenging to find perspectives to focus on for each new post. However, in this weekend's screening, I had two things jump out at me immediately.

Editors deserve a huge amount of credit for the movies they work on. There are many films that have been saved by an editor fixing things that the director was unable to take care of on set or location. Anne V. Coates was certainly deserving of accolades when she did this film, but it is clearly the vision of David Lean. Coates however realized that vision in numerous ways.

I did not take notes on all of the cuts and transitions but I noticed especially in the first third of the picture how jump cuts were used judiciously. The most famous being the jump from Lawrence blowing out the match to the rising sun over the desert. The camera work was smooth but it is enhanced by a timely use of swipes from below and the sides. It was also impeccably timed to synch with the fil's action and music.

The other thing I was paying attention to during this screening was the willfulness of Lawrence himself. In the first half of the movie, the story revolves around the success that Lawrence wills himself to accomplish. The match trick is the perfect precursor to all of these points. As he tells his colleague who burns himself while trying to copy the action, "the trick is not minding that it hurts." He chooses to forgo a drink when his guide  does not drink. He is unyielding in the first confrontation with Sherif Ali. The trip to Aqaba across the Nefud desert is a miracle that he chooses, and then he repeats it with the trip across the Sinai.

He jokes at one point with General Murray that he is not insubordinate, but rather it is his manner that makes him seem so. That is a piece of circular reasoning being used to justify the fact that he is willful, even with those under whom he is supposed to be working.

The events after the intermission, demonstrate that will alone cannot accomplish the things he wants. He uses the same fierce will power to lead the Arab Army, but with limited success in regard to their discipline.  The military success cannot be matched with political success. His will is broken at one point by his brutal encounter with the Turks, and the depraved General played by Jose Ferrer. He blames Allenby for returning him to the effort, but it is Lawrence's will power that moves him to try to reach Damascus first. 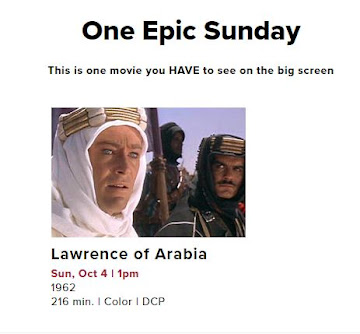 Posted by Richard Kirkham at 8:45 AM

Wow! What a beautiful place to watch a movie. Like a slice out of time!

Anytime you are in the area and want to go there for a screening, I'll buy the ticket and go with you.