Created Equal: Clarence Thomas in his Own Words

He is not known by a clever turn of an Acronym like "the Notorious RBG", and it is unlikely that he will be a bobble-head available at Hot Topic or Spenser's Gifts, but he certainly is a well know and controversial figure. I'd guess that he was one of the Justices that the average American would be able to name from the Supreme Court, and that may not always be for good reasons. Regardless of how you feel about his judicial perspective and role  on the court, I think you would find this film interesting in the way many biographical documentaries are. This one also has the benefit of his personal narration.

Maybe narration is the wrong term, exposition might be more appropriate. The sub-title of the film is incredibly accurate, this is Justice Thomas as he sees himself. The director and producer had thirty hours of first hand, single camera interviews with him and they have culled the story down to a manageable two hour narrative of the Justices life. It can basically be broken down into a three act structure, with a bit of an epilogue. He describes his childhood, being raised mostly by his grandfather up through the seminary school he dropped out of angry over the indifference of his class mates and the Catholic church to the assassination of Martin Luther King. The middle section describes his political evolution in college and then as a law student and young lawyer. He falls into public service with a Republican, which was the last thing he ever expected. Finally, there is the professional career that should be crowned by his appointment to the highest court in the land but was overshadowed by accusations of sexual harassment.

The first half of the story is told in much the same way that Ken Burns tells his stories. There are archival pictures and film clips used to create the exposition as Thomas speaks. In some places there are simple filmed segments of places that Thomas grew up in or simulations of the viewpoint he might have had. There are no actors in the film however so it never feels like a docudrama. There are some musical underscores but none of them has any heavy drama to them, this is not a film about recreating the emotional experiences that he went through. 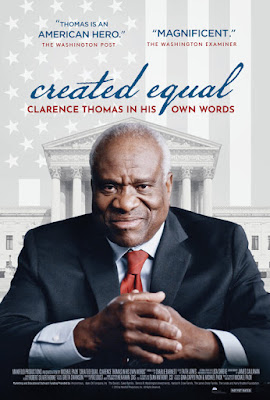 The photographs and archival material gives way as Thomas becomes a public figure in the Reagan administration and there is video and film footage that can be plugged in to provide historical context. Of course the greatest amount of that material comes during the hearings on his nomination in front of the Senate Judiciary Committee, chaired at the time by Senator Joe Biden. The Vice President and now candidate for President, does not come off very well in the few minutes he is on screen. The rogue's gallery of Senators in the hearing also seem slightly sinister, whether they were advocates or opponents of his nomination. The other narrator that we hear from extensively in this section is Mrs. Thomas, who aggressively defends her husband as he is being grilled by the panel and raked over the coals by the media.

Justice Thomas explains the basis of his judicial temperament and the originalism that drives that perspective. There is a bit of a coda that tells us a bit more about him as a person in this day. He is a Nebraska Cornhusker Fan, and an RV enthusiast who likes to travel the backroads of America. If you admire the Justice, you will certainly appreciate the film, but even if you are a critic and opponent of his views, I think you will find it an interesting and even handed telling of his story, and that story is important.
Posted by Richard Kirkham at 7:46 PM