This is a change of pace for the site, this is a live stage event rather than a movie, but this is a venue that allows me to share with a variety of people who might find this worthwhile so please indulge me for this post.

Hamlet The Rock Musical has actually existed since the early 1970s. It is being revived for a run in North Hollywood by Concert Promoter David Carver, who saw it a dozen times as a kid and has dreamed of mounting it for the stage again for decades.

An abbreviated version of Shakespeare's longest play, it does not run five plus hours but rather a brisk two with a nicely placed intermission. If you are a theater buff, a fan of 70s style rock music, or a passionate fan of William Shakespeare, you really need to see this production.

The set design is cleverly minimalist, using an elaborate parapet that images are projected on to create an interior of a palace or an exterior graveyard. As with many stage productions, the cleverness of the set is simple with a couple of walls that open and close and a retractable set of stairs that can be used in multiple scenes. The atmospheric projections help set the mood from even before the play itself begins.

From the first strains of music I was set to really like this piece, The rock score starts out as strictly background music and it is stirring. Once the actors start singing however, it feels even more familiar, even though we don't really know the lyrics. This Musical is clearly influenced by the greatest Rock Opera of all time "Jesus Christ Superstar". All of the featured actors have spotlight moments and the songs range from metal style growling to R & B inflected pop. The voices of the actors are solid all around. My daughter who was with me thought that Fatima El-Bashir , who plays Ophelia, was fine but the weak link in the cast, which was exactly the opposite of my impression. She was soulful and emotionally on key for "Hello, Hello" and "If Not to You".

Hamlet, as played by Payson Lewis is stronger than he is usually portrayed in films, more Mel Gibson than Olivier or Branaugh. He has a strong voice and was athletic in the dance moves without becoming a ballet performer. Ian Littleworth is a good match in performance and voice as Laertes and the climax of the musical depends on the by-play between them during the duel/joust. Kevin Bailey as Claudis has to do a lot of the heavy lifting of the narrative in the songs but he pulls it off very effectively. Carly Thomas Smith as Gertrude was overshadowed for most of the play, as the character usually is, but there is a spotlight moment in the back half of the second act that gives her a chance to make the character more meaningful.

As usual with stage musicals, there are specialty players that steal moments and make the experience the thing that is so memorable about the play. Rozencrantz and Guildenstern have a delightful duo playing them and their introduction provides some sparkle to the first act. Kudos to Justin Michael Wilcox and Alli Miller for their amusing dance routine and comic timing. Another audience favorite will be the scenes with the Players. All of them were excellent but Bruce Merkle who is not credited as the Player King but who basically has that part, gets a lot of mileage out of his vocal range and the audience laughed loud. 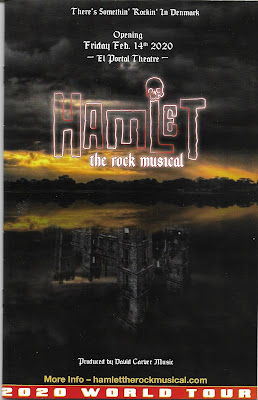 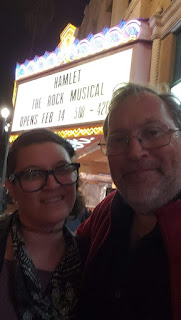 This is clearly a labor of love, the cast of twenty make the production feel bigger than it really is. The offstage musicians play the music  with gusto and a bigger audience would probably help but even the moderate sized audience we saw it with was engaged and made it a theatrical experience.
Posted by Richard Kirkham at 11:19 AM