It has been six years since "Wreck it Ralph" popped into our video consciousness and it's time for a sequel.  I am pretty sure I only saw the previous film the one time. It's not that I disliked it, it simply was not my jam and I never felt connected to it the way I have to other Disney films. So this sequel was not something on my radar until a trailer dropped, and even though it looked like it might be fun, I was in no hurry to see it. In fact, I ended up in this screening completely by accident. I'd gone to see "Creed II" in the brief window of time I had available yesterday, and the film failed. I sat in the dark and the movie never started. After I notified the management and they struggled for ten minutes to reboot the equipment, I was offered a pass and an invitation to take in another film. "Ralph Breaks the Internet" was what was starting next so here I am.

After having built a world out of the old arcade games of the past, the makers of this film decided that the thing that made the previous film worthwhile was that creativity which made the arcade games real. So instead of building a story in the world they have already explored, they looked for new territory and of course what is right in front of them is the internet. Take all the ones and zeros and turn them into an imaginary community populated with characters that make all the things we users see on line. Algorithms are personified, pop up ads have a life of their own, and web sites are viewed as corporate entities occupying space much like old school brick and mortar retail stores did. Our heroes go on a quest to find a rare piece of equipment on eBay, but of course the journey is complicated and the main duo has lessons to learn.

John C. Reilly reprises his character voice as the lovable villain of a video game, who really just wants to feel a connection to others. His story was much more complete in the earlier film, in this one he is more of a cog in the clockwork of the narrative. Ralph does get to emote and the character has to grow by the end, but this is not really his journey. Vanellope, voiced by Sarah Silverman is also a character with some story to enhance the proceedings, and maybe she could be seen as the key figure in the film, except I think the story is less about either of these two. The story is really about us, the users of the internet, and how we can trivialize just about anything and make it into something to be consumed.

One of the obstacles the two main characters face is a lack of cash, but on the internet, you can generate money with stupidity if it manages to hit the right sweet spot. Just as an example, the post on this site that has received the most traffic over the eight years I have been doing this project is for the movie "The Deep". I doubt the reason is my keen insight or the widespread affection for the movie. The explanation is simple, I put in a picture from the film that features the best wet t-shirt contest winner ever. Boobs bring in the boobs and "Ralph Breaks the Internet" is primarily about how gullible, distracted and bored we all are with the material that can be found there. The positives are mentioned as well but it is the critique of our behavior on line that makes this a message movie.

If you watch the details of the scenes the characters walk through, you will notice a lot of clever references. Memes that have come and gone still linger in the community. Sly inclusion of Disney characters is both obvious, as with the Disney Princesses, and sometimes more subtle, Mickey hats and castles. You might think this is a movie filled with product placement, but it is our collective memory of products that makes us notice them.  Gamers will find things they can relate to, this movie is almost a mirror image of "Ready Player One" in its' use of pre-existing products and images. While there is a scene that involves the "dark web" thank goodness it is not a realistic depiction of what might be found there. My favorite detail involves a Louisiana Licence plate, I'm sure you will find your own favorites somewhere in the film. 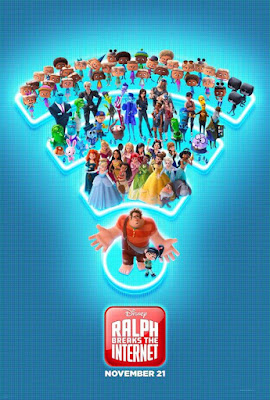 So once again, there is incredible world building, a serviceable character story and plenty of humor to carry the film. My reaction to this movie is very much the same as the previous entry, it is entertaining and it will work for families and those who love the setting. I would not turn it off if it comes across my radar in the future, but I can't see much reason to reboot and watch it again. I will be mocked by far more clever films than this in the future, so I'll probably just wait for them.
Posted by Richard Kirkham at 11:15 AM

This is such an amazing movie! Internet has made life very easy now and I am glad that I know how to use these websites for good. I found shows by Andy Yeatman on Netflix and I am going to show it to my kids very soon. It has a good entertaining and literacy value.