My Fair Lady: A Beautiful Memory

This is one of those posts that is personal nostalgia rather than a film review, so if you were looking for a detailed evaluation of the film, sorry, not today.

Last night I watched "My Fair Lady" on TCM as they were screening it in honor of it's inclusion on the National Film Registry. I happened to be by myself, a scenario that is likely to be more common than I have any desire for. As almost all film lovers know, much like music or the scent of Grandma's cooking, a film can trigger memories that are vivid and powerful, and that is what hit me last night.

In 1994, shortly after my Mother had passed away and my Father began living with us, "My Fair Lady" was restored and released in a limited number of theaters for a week or so. It might have been Mother's Day weekend that we chose to go and see this, but I definitely remember the experience. My girls were Eight and Six, and we drove across the county of Los Angeles, to Century City (A place my youngest commuted to on a daily basis for the last year) to see this at the Century Plaza Theaters, which were the Fox Studio's Premier Houses located in the Century Towers complex.

My wife and I delighted in how much the kids liked the movie, and as always, they wanted to dance under the screen while the credits rolled. I'd been sick with grief for several months, the circumstances of my Mom's passing and my Father's condition were putting me into a depressed state. This wonderful experience lifted my spirits and it was a turning point in my attitude for the rest of the year. As a family gift, I sprang for a Deluxe Box Laser Disc Release of the film, which was a beautiful Christmas reminder of the joy we'd experienced a few months earlier.

Last night's accidental viewing of the film stirred a desire to look at the elements that were included in the box set, and I thought I would share a few pictures. 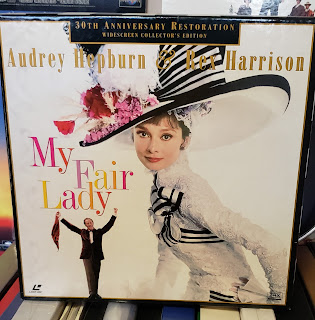 This is what the box looks like. While there is no beautiful artwork  to illustrate the film, the photo choices were grand, especially the focus on the gorgeous black and white number that Audrey Hepburn wore at the Ascot Race scene. 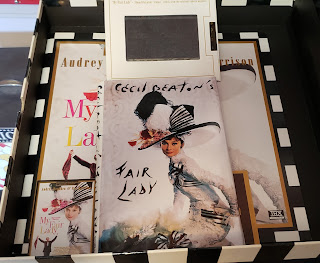 As usual with great packaging, the extras here were special, they included a book about the film, a CD of the Soundtrack, and a 70mm film frame from the movie that came from an original print. These were all carefully stored in a fitted section located under the three discs that contained the movie and a number of extras. 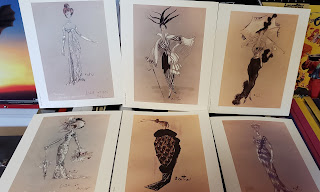 Also included was a portfolio of costume designs for many of the women's gowns in the film. On the left you can see the two memorable outfits that Eliza wore at Ascot and at the Ball. 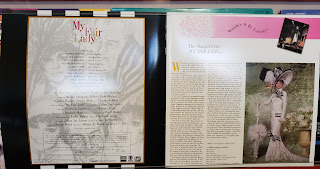 There is a program book included that details information about the film, the restoration and the history of the film. Somewhere in my collection, there is also a poster for this release, which was available to those who purchased this set, it is basically the same design as the cover of the box.

As I was watching this, I had some wistful moments and feared I might descend into another bout of grief, but as I thought more and more of our visit to a special film, and the pleasure I had from sharing it with two enthusiastic little girls and my wife who also found the whole experience delightful, I stopped tearing up and instead bathed in the warm glow of a family moment which helped me through despair twenty-four years ago. Last night, it worked a little more magic and instead of sadness, I feel uplifted today.  One step at a time, but this was a good step to take.
Posted by Richard Kirkham at 9:21 AM