We got a Spielberg film just last December (although for most it was just a couple of months ago in January), but "The Post" despite clearly being made by Spielberg, doesn't need to be a Spielberg film. "ready Player One" on the other hand, seems to demand the hand of the master on the controller. This is a meta exercise in nostalgia, both for the period of time and for the kinds of films that Spielberg used to make. Lucky for us, it mostly works and the reason is Spielberg himself.

The book that the film is based on is a pastiche of ideas and images and memories from a million minds of gamers. It was primarily a tool for reliving the joy that comes from mastering a new game and solving a puzzle. Since the gaming industry was born and thrived in the 1980s, it also is rich in the music and films of the times. The conceit is simple, this movie is a race between lonely souls who have moved out of the real world and a mega corporation that wants to control the environment that they have all moved to. The competitions are laden with the kinds of pop references this generation of geeks will appreciate.

Ernest Cline's novel is much darker than this popcorn fueled entertainment. A pop culture geek himself (he wrote the movie"Fanboys"), Cline saw the limitations on social interactions that living in virtual reality held. The specter of a new form of debtors prison, hovers over an environment where fantasy role playing has replaced real intimacy. The villain in the book is much less cartoonish than the ultimately feckless Ben Mendelsohn of the film.   The problems faced by the competitors were often mundane and repetitive, as many of the games being saluted were. It takes someone with a lot of patience and time to master some of the ideas that hardly seem worth mastering in the first place. Spielberg with the help of co-screenwriter Zak Penn, has refocused the story to celebrate the pop culture more than the dark under current in the story.

In the first chase in the story, we are introduced to the three main characters as they dash madly through a race that looks like a combination of Mario Kart and Grand Theft Auto. The motorcycle from "Akira" and the DeLoren from "Back to the Future" are driven by the future romantic couple and each has their own way of challenging the game. The chase though is typical Spielberg, it is frenetic but still comprehensible.  As usual, there is always one more piece of dramatic business to stretch out the tension of a scene. The events are so meta that he even lampoons himself with a reference to Jurassic Park as well as a few films he had a hand in as producer.

How could it not be a Spielberg film when the cinematography was done by the artist that Spielberg has worked with 18! times over the last thirty years. Janusz Kaminski is responsible for the look of so many Spielberg films that he might just be his shadow. The one thing that is missing that would put the nail in the coffin is a John Williams score. We get a vigorous but clearly 80s style theme from Alan Silvestri, veteran of "Back to the Future", "Amazing Stories" and a couple of upcoming films in the MCU. Oh, he also scored the "Super Mario Bros. Movie".

The changes lead to a more audience friendly experience. There are more movie references than video game Easter Eggs (although there are plenty of those). A 70s guy like me appreciated the music selection for the nightclub scene and if you like "The Shining" it replaces "War Games" as the main film sequence with a completely different take on the process. Also, there are fewer deaths of heroes in the movie. It is a cinematic stew of epic proportions.

Characterization and subtext are mostly lost with this film interpretation but it makes up for those points by always being visually stimulating. It does not have the resonance of an Indiana Jones or E.T., but it will entertain you for two plus hours and that time goes by quickly. The presence of Simon Pegg and Mark Rylance as secondary figures also adds to the depth of the film, but if deep is what you are looking for, go back and watch "Lincoln". Until the next Indiana Jones film, this is as close to classic Spielberg as you are likely to get, and that is pretty darn close. 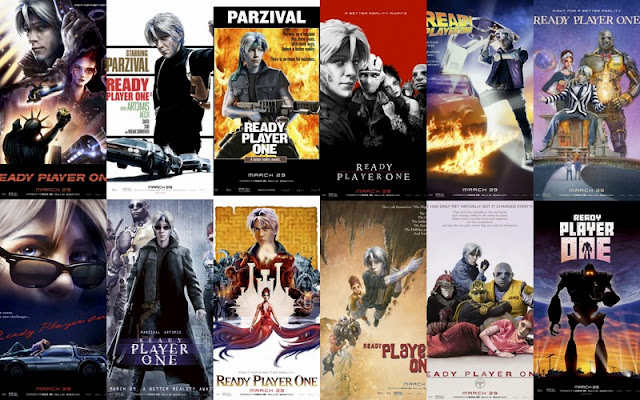 Posted by Richard Kirkham at 7:42 PM