Here is a film that has no more than a half dozen characters. There are maybe twelve lines of dialogue in the film. For the first third of the movie there really is no score. And the film manages to build suspense, create character and provide enough exposition for us to understand what is going on. That my friends is a well written story. There may be a couple of plot holes or inconsistencies but once the idea has grabbed a hold of you, it does not let go until the end. Maybe you can worry about minor quibbles after you catch your breath and relax your body and grip on the armrest. Director and co-screenwriter John Krasinski has made a modern horror classic. It is limited on gore but rich in suspense and ideas.

The premise of the film is set up very nicely in the introduction of the film. There is a screen shot that mentions a day count, but that is all. Everything else is laid out for us in silence. The children are kids, but one of them is sick. The older sister is enjoying shopping in the venue but is also watching out for her youngest brother. The parents are attentive to not making a sound and when a potential noise disaster is averted, everyone seems to heave a sigh of relief. It is just kids being kids that leads to a disaster and starts us into the darker paths of the story.

Millicent Simmonds is a tween actress who has to carry much of the story. She is a deaf girl playing a deaf girl but that is just appropriate casting, it does not diminish the performance. She has to convey the attitude of a burgeoning teen with facial expressions and shoulder shrugs. She nails it. There is a shadow of guilt that haunts her and during the course of the film, she pulls away from her father a bit because of how she thinks he sees her. Krasinski as the father in the story is as loving as a parent can be, but the self talk that only a teen can create is the focus of this relationship. There are two resolutions in the film, one for the personal relationship and one for the horrifying threat that the family faces. They are tied together by the same device, but Krasinski has written himself a heroic moment that will pull at you like crazy. When Simmonds realizes how she has mistaken her father, despite all the evidence of his love her, it is a great acting moment from the young star of the movie.

Everything in the film depends on the family remaining silent. The plot element that challenges this need the most sets up the climax of the film. This is where Emily Blunt gives one of the greatest horror film performances ever. She is not simply reacting to what happens, she is at the center of these events. The courage of a mother was shown to be a spectacular character arc in "Aliens", well this one could easily sit beside that film. The story adds tension upon misstep, followed by relief and then even greater tension. Half of this is played out on the face of the lead actress. The rest she manages in a physical performance that had to be very challenging. The final image of her in the movie will make you glad you sat thru the previous ninety minutes. 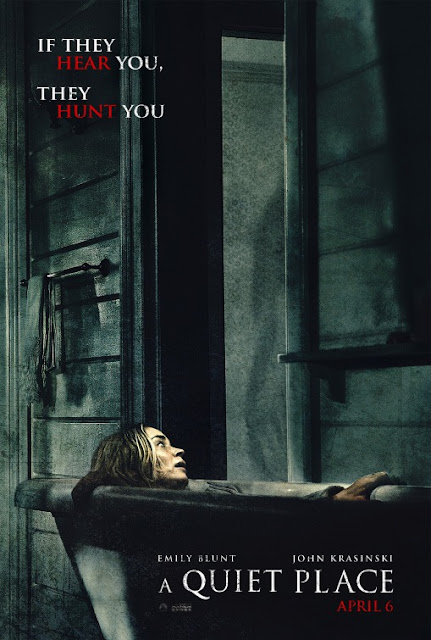 OK, there are a few plot problems concerning electricity and the parents key decisions regarding the family. The focus on their farm makes sens but there seems to be an attempt to contact others in multiple ways, and we don't exactly know what that is supposed to accomplish. Human beings inevitably make noise other than speaking, and while the film meticulously shows us the efforts made by the family to keep quiet, a draft in the Spring could sent this out the window in an instant, and no real answer is ever provided for such inconsistencies. None of that really matters however because the slowly building tension and the moments of suspense keep us enthralled and that's what a horror film should do. That the film also addresses issues of love and redemption make it all the more powerful. You can expect to see this film on my end of the year list. If I were not so afraid of shouting after seeing this, I'd shout at all of you who haven't gone to a theater yet.

Posted by Richard Kirkham at 6:57 PM