I'm sure your mother told you at some time or other, "if you don't have anything nice to say, say nothing at all".


There are a couple of nice things to say about this film, although they are not really compliments on the cinema of the story. "Fifty Shades Freed" is bookened with two quite lovely montages. The opening of the film sweeps us through a wedding and honeymoon that could only exist in the rarefied world of billionaires with too much time on their hands. Anastasia and Christian fly on his private jet to European romance spots and ride bicycles, eat at cafes and run through the rain. Then they jet off to a tropical local and spend time on a gigantic yacht and topless beach. An environment that brings out the puritan in our perverted hero. He feels uncomfortable with his bodyguard and chauffeur being able to ogle his new brides boobs.

Then we get an hour and a half of domestic adjustment, bondage, and a kidnapping plot that feels as if it was transplanted onto this story from another film.

At the climax of the movie [we will talk about the marketing tag line in a moment], there is another montage, but this time of events that took place in all three films. These sequences include some spectacular shots of yachts, gliders and more BDSM. The depth of these characters and the story could be covered quite easily with a PowerPoint slide show of their vacations and sex play. There is literally nothing more interesting in any of the three movies. OK, that's not quite true, there is one car chase sequence that was nicely staged in this film, although it makes no sense at all.

There, having said something nice, I feel free to say some other things that are not so nice. This movie is boring. There are a half dozen sex scenes, a couple of violent moments and the aforementioned car chase, and still it is dull as can be. The plot is creaky and would probably have seemed old fashioned in 1958 much less sixty years later. It basically involves two people who are fairly selfish, learning to think more of their partner than themselves, and one way to do that is to throw in a random revenge plot. The antagonist is a character who was in the first movie for all of a minute and a half. I don't think there was a mention of him in the second film at all. In this movie he seems at first to be a criminal mastermind who has somehow outwitted the security of the "Grey" Corporation. Then he turns into a salivating maniac who basically makes every stupid mistake possible at the culmination of his plan. Oh, and by the way, the character who is kidnapped is not the female lead, but a secondary character who was in the second film for maybe a minute and then this one for two minutes before the big plan is sprung. It's barely clear that she is the other of the two other female characters that have more than thirty seconds on screen. 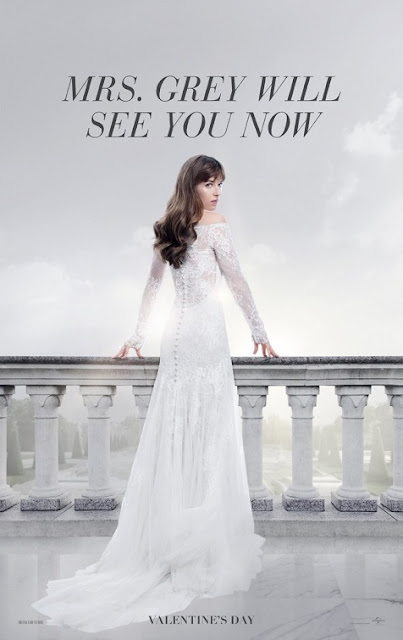 The first of these films was not any great experience, but it was not nearly as bad as so many people said. " Fifty Shades Darker" is mostly just not memorable. This film tries to titillate us in the marketing with a catch phrase designed to appeal to the prurient interests of the series fans. " Don't Miss the Climax". Sorry to disappoint all of you fans of the Mommy porn. This movie is limp. Drop a Viagra and move on to something else. There was a trailer for a film clearly aimed at an older audience that played before this screening. "Book Club" features a plot involving older women reading "Fifty Shades of Grey". It looks much more entertaining than this movie was, and it doesn't look good.

I saw this in an IMAX presentation, and I really hoped there would be 3D glasses involved. That might have added something to the experience that would make it more memorable. Here at the end, that probably would not have helped. There is one last good thing about "Fifty Shades Freed".  We are now Freed from ever having to think of this film series again.
Posted by Richard Kirkham at 7:05 PM