I have seen a building enthusiasm for this film since the first trailer appeared. It has a startling look in the most famous scene from the story, and it is enough to get buzz going for the film. A few weeks ago, as I was watching another Warner Brothers film, they played a five minute sequence from it as a promo for the movie. That short segment was terrifying and amped me up for this movie in a way that I was having a hard time believing. I like some Stephen King properties but I have never anticipated them like a Star Wars film, but something here got under my skin. I am writing this a couple of days late because I have been traveling. We saw the film in one of the Thursday night early screenings and it was packed. This movie is clearly going to be huge.

All that said, I may be bursting a few floating red balloons with this next statement. "It" is not as frightening as you hope it will be, but it is better put together and acted than you have any right to hope. Not having read the book or seen the mini-series that was made from it, I have no reference for how the story is supposed to play out but there are a couple of things that are obvious right away. This movie is really a coming of age story with some fantastic elements and those are designed to scare us almost as much as the daily horrors that are part of growing up. All of the kids in the story are outsiders who have been labeled as losers. Each one is a stereotype that we have seen in other movies before. The sensitive nominal lead is a kid who is struggling with the loss of a beloved sibling. There is a chubby kid with a heart of gold and the soul of a poet who will be overlooked as a romantic interest in spite of being bright and charming. We have a needy Mama's boy who is a little to cowardly to be that shallow and will reveal himself as more than he appears before it is all through. The four other kids include a girl with a secret, the one Jewish kid in town, and a geek with a severe case of coulrophobia and let's not forget the one black kid in the neighborhood as well.

This version of the story begins in the eighties. I understand originally it was a fifties setting so that the adult part of the story would be contemporary for when the book and TV movie came out. The update does a couple of things,. First it will allow the adult story that is going to follow this chapter of the saga to take place in our times. More importantly, it sets the kids story in a period where nostalgia runs deep for modern film audiences. One look at this group of kids and there will be visions of "The Goonies" running through the minds of Gen-Xers and millennials. There is even a sly reference to the John Hughes films that so absorb the geek film audience of these times. All of this is managed with some splendid child performances by the young cast. Finn Wolfhard plays Richie, the geek with a filthy mouth. It is certainly no accident that the thing he is known for is the Streaming series "Stranger Things", a show that wallows in the same sort of 80s nostalgia.Jaeden Liebeher is Bill, the central character who has guilt issues that mimic King's character Gordie LaChance from "Stand By Me". He is a solid child actor, I have yet to catch up with his performance in "Midnight Special" but he was memorable in "St. Vincent" a film I can easily recommend.   Sophia Lillis is the right combination of tough girl and sensitive soul. Her character's story is probably the darkest of the kids and she plays it as a delicate balance of fear and openess. The performer who really steals the movie for me was Jeremy Ray Taylor, who plays Ben, the new kid who also happens to be the chubby kid. His struggle to talk to a girls, walk his bike and hold onto a school project at the same time is a perfect rendition of a kid at that age. His character has been well written but he was also nicely cast and the impact on the audience i a couple of spots shows that he may have generate the most empathy of anyone in the story.

The elephant in the room is Bill Skarsgård, the actor who portrays Pennywise the dancing clown. We get hints of the history of this character but nothing more than musings. Whether he is a real monster or a creation of the id of all these characters, Pennywise will do for clowns what Clark Gable did to undershirts in "It Happened One Night". Along with John Wayne Gacy, Pennywise does more to justify fear of clowns than anything else I can think of. Skarsgård has a distinctive lilt to his voice in this film. At times he sounds almost like a benign entertainer, but one look at those eyes and that deceptive smile and kids will run. The most frightening part of the film happens at the beginning of the film when cute as a button Jackson Robert Scott playing little brother Georgie, meets Pennywise at the storm drain. All the other horror moments in the film seem conventional in comparison to the exchange of dialogue and the slow paced bad choice that Georgie makes. The plaintive expression on the clowns face belies the evil that resides there and the quirky voice pattern makes us doubt that there is any danger at all. The crawling of your skin however should be enough to make you run in the opposite direction. 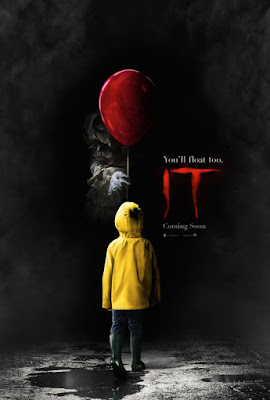 Like most horror films, every few minutes the audience is provided a jump scare or a sequence of building tension with a visual hook to it. None of these moments contains the same gut level terror in that opening moment. There is one scene featuring an old slide projector that comes close but too much has been revealed in the trailers to make it work as well as it should. At the climax, there is a little more of Pennywise and his dialogue than is advisable. The more tangible the character is, the less frightening he seems. As I said earlier, this is more of a coming of age film than a fright fest. The confrontation at the end makes this feel more like an action film and less supernatural, in spite of all the supernatural elements.  I still quite admire the film, it's just that it is less of what I was hoping for and more conventional than I wanted. Still it is a quality picture and if clowns creep you out to begin with than maybe "It" will succeed in giving you the nightmares that I somehow missed out on.

Posted by Richard Kirkham at 8:19 PM