Since I have been under the weather this last week, fresh material is unavailable. I will continue to upload the lost posts from Fogs Movie Reviews, this originally was published in the Fall of 2013.


To a large degree this could properly go into the category, "Movies That I Want Everyone to Hear", because much of the joy in this film derives from the fantastic soundtrack and fresh delivery of the titular band that is the focus of this movie. All the way back to the 1930s, kids were getting together musical acts and putting on a show as the plot of a movie. "The Commitments "shares a lot in common with Mickey and Judy, as long as you ignore the sex, poverty, drug use and the 145 times in 113 minutes that the F-bomb gets dropped. 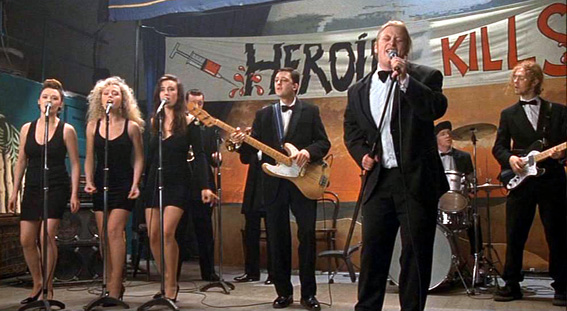 The premise is incredibly simple. Jimmy Rabbitte is a small time hustler living in the poverty stricken sections of Dublin. He gets by selling pirated videotapes and music out of his bag wherever he can find a receptive audience. His dream however is to manage a big time music act. With a core of friends that he poaches from a wedding band that he helps get gigs for, they begin to search for other like minded musicians. The plot follows a simple trajectory. The band comes together, it finds it's musical heart, it is tested by internal conflicts, and it largely succeeds artistically, for a short period of time until the inevitable personality clashes take their toll. There is not a great deal that is new here, or was new even in 1991.

What is new is the perspective of the band members and the music they want to make. Jimmy dreams of a soul band, modeled after the likes of Wilson Pickett or James Brown. It is the rejection of most of the contemporary music of it's time that provides several bits of humor.  Girls who audition for the band in their Madonna styles get hustled off as soon as Jimmy gets a good laugh. Heavy Metal musicians are considered but rejected because their style is so at odds with the image Jimmy has. Punks and Boy George wanna be's get the door slammed in their faces. This is a musical film, set in the period of U2, Sinead O'Conner, Guns and Roses that rejects all of those musical styles. This band is going to ape the soul classics of the early sixties, not the punk aesthetic of it's time. An early sequence in the film has all kinds of musicians showing up at the Rabbitte house, and Jimmy's Dad is mostly bewildered by what he sees. Jimmy's Dad is an Elvis man, and he finds much of what passes for music blasphemous, just as Jimmy does but for different reasons.

At times some of the characters are a little hard to take. Some of them have pretensions about their music skills, some become megalomaniacs when they discover some hidden talents, and almost all of them are young. Young in the way that the heart can be pulled apart or the ego can blind us to our best interests. However, for every cliche of emotional upheaval or youthful intransigence, there is a music sequence that bounces along and sweeps us up with enthusiasm. When the three girls recruited to sing backup are practicing amidst the laundry hung out to dry, it is a moment of musical and visual heaven.

The band members begin to steep themselves in the soulful music of their inspirations while Jimmy scrounges up gear and rehearsal space.  When rehearsals start the kids are not quite in sync but they are willing to keep working. The oldest member of the band Joey "The Lips" Fagan , a supposedly professional side man who played on records that everyone would know, begins to mentor some of the band. He provides some inspiration but also is the catalyst of some of the personal problems the band faces. All of the characters get a moment or two to connect with the audience.

Although the surroundings are grim, the story isn't. Half the band is on the dole, some work to support their families, all of them live in cramped quarters and struggle for a little privacy at times and a bit of the spot light at other times. Every rehearsal gives one of our characters a chance to step up and show something. When the time comes to get on stage, the idea of a band, one that merges diverse parts and components is well illustrated. What is also noticeable is when the band isn't fitting together. There is always the music to carry us through. When the singing starts it is infectious, even when things are not going well.

Jimmy and his family are the string that holds the story together. The book that the movie was based on follows the Rabbitte family and there were two more books turned into movies that shared the same family. Jimmy does not appear in the other films but his Dad does. The Dad is played by the very recognizable character actor Colm Meaney. His early skepticism and then his gradual acknowledgement of the quality of the music is a subtle way of putting something more into the story.  It is not dwelt over but occurs in a brief moment during a concert performance.

Watching the band come together and seeing the way they begin to feel about themselves reminds us of the power of music. Jimmy has imaginary interviews with the music press as he soaks in the tub or lays in bed. Joey may or not be what he claims but he certainly lives like he is. Some of the band make sacrifices and others are unwilling to. The usual strains begin to surface but the girls are singing well, the lead singer has a great soulful voice and the instrumentals are constantly getting tighter. The question becomes whether the band will reach it's potential before everything implodes.

Most of the young folks in the band were actually musical performers before they got involved in acting. Glen Hansard who plays guitarist Outspan Foster goes on to star in the movie "Once"  for which he wrote the Academy Award winning song "Falling Slowly". You can see when the musical sequences are playing that they feel involved and Committed. The story has bits of humor and character development but it really isn't about the plot.

A long concert sequence is the climax of the movie. The band and the audience are in sync when they are on stage and Jimmy appears to be on the brink of getting the band a professional music contract. Backstage things are not solid. The band members have rivalries and jealousies that tear at them. This particular night they were supposed to jam with Wilson Picket himself. It was all arranged, at least according to Joey. When The night is ending and Picket has not shown up, all hell breaks loose. There is one final climatic singing sequence and then the story plays out as it inevitably would.

The director of this film was Alan Parker. He made films like "Mississippi Burning", "Midnight Express", and "Angel Heart". What I think is surprising is that he also made musicals. "Fame", "Pink Floyd's The Wall", "Bugsy Malone" and "Evita" are on his resume. This was a modestly successful import film for the American market. The Irish accents almost qualify it as a foreign language film (much like "Snatch" or "Lock, Stock and Two Smoking Barrels"). In the U.K however it was the most honored film of that year, receiving the BAFTA Awards for best editing, screenplay, director and film. It may be the setting that kept it from being a bigger hit or as well remembered as it deserves to be. Anyone who loves good soul music however will take this film to heart and if you like the story of the kids putting on a show, this updates it and makes it feel real.
Joey: Look, I know you're hurtin' now, but in time you'll realize what you've achieved.
Jimmy Rabbitte: I've achieved nothing!
Joey: You're missin' the point. The success of the band was irrelevant - you raised their expectations of life, you lifted their horizons. Sure we could have been famous and made albums and stuff, but that would have been predictable. This way it's poetry.

Richard Kirkham is a lifelong movie enthusiast from Southern California. While embracing all genres of film making, he is especially moved to write about and share his memories of movies from his formative years, the glorious 1970s. His personal blog, featuring current film reviews as well as his Summers of the 1970s movie project, can be found at Kirkham A Movie A Day.
Posted by Richard Kirkham at 7:07 PM