Beyond the Mouse: The 1930s Cartoons of Ub Iwerks 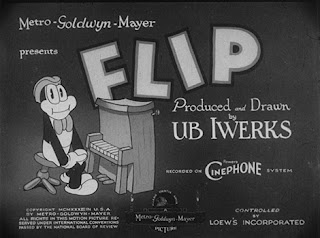 This/morning we have animated fare on the plate. The works of Ub Iwerks are going to be the subject of the program, Beyond the Mouse. There were ten cartoons from the 1930 period, starting with an Oswald Rabbit short that was pretty primitive but very amusing. The level/of violence was a bit high but it was entertaining. Steamboat Willie was next and it is probably a bit harsher than you remember.

Iwerks was very much responsible for the Look of Mickey Mouse early on. The reasons he went off on his own for this period did not seem to be about a problem with his friend Walt Disney, but rather exploring his creative impulses. There were a couple of early color cartoons and some of the background stuff stands out a bit more.

The Skeletons Dance was a great Black and White, I think that was still with the Disney group, but there were two follow ups with a character named Flip the Frog. They were both amusing but definitely a bit different. There was one sequence that the frog ends up with his pants around his ankles for a/big chunk of time. That seemed awkward. There were two Willie Whopper cartoons, a character I was not familiar with who tells tall tales. One was kinda dark about a trip to Hell and the Devil. So we got a little history lesson to start our day.
Posted by Richard Kirkham at 9:38 AM