A slight misfire from the EON team after the success of "Casino Royale". Maybe it suffers from comparison to it's companion piece, or maybe it is the dour villain and odd subject. I got the feeling there was a political statement here somewhere, but it was not clear what they wanted to say, and people don't go to a Bond movie for the message. It does have a revenge theme to it that I like, and there are a few sequences that work pretty well, but my guess is that they had the wrong director and an incomplete script. Camera movement can't solve weak story telling. Here are seven things I liked about the film despite it's weaknesses.


The lavish hotel that the evil general and the main villain Dominic Greene occupy at the end of the film,the Paranal Observatory's ESO Hotel, gets burned up in a fire in the middle of the desert, when the macguffin of the story is water. Go figure. It looks pretty spectacular though. 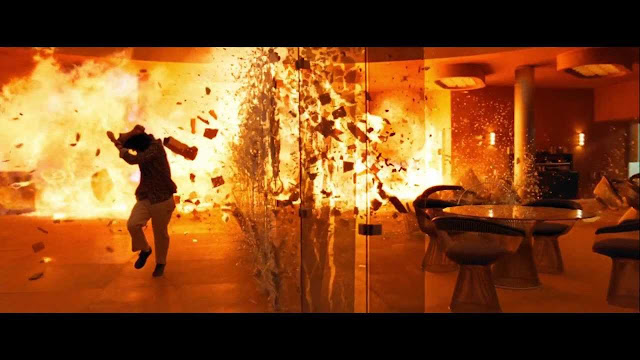 
The beautiful British spy contact that Bond woos while in pursuit of the villain in the story, ends up dead, covered in black oil. An image that recalls the horrific end of an earlier innocent in "Goldfinger".

003  The last gunshot of the foot chase originating from an interrogation of Mr. White.


This was a daring shot while hanging upside down after a vigorous chase and fight. Bond dropping near to the ground and then struggling to grab a gun just at his fingertips works visually because of the camera work. 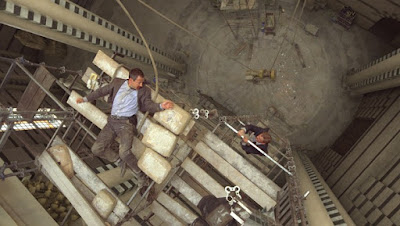 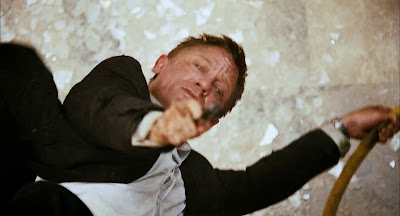 004  Euro Weenie Roast in the Desert.


Bond demonstrates that he lacks the Quantum of Solace that would allow any humanity to survive. After he interrogate Dominic Greene, he abandons him in the middle of the desert, with no water to drink (irony) and only a can of oil to quench his thirst (spite for the death of Agent Fields). It is one of the brutal acts of 007 that makes him an intriguing and not always pleasant companion at the movies.

Drink up Mr. Greene, you're a dead man anyway. 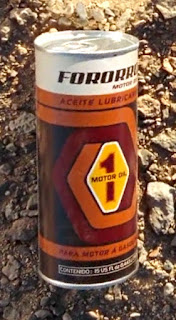 005  A Different End to a Knife Fight


Bond gets jumped in a hotel room and has a brutal but very quick fight to the death with his attacker. 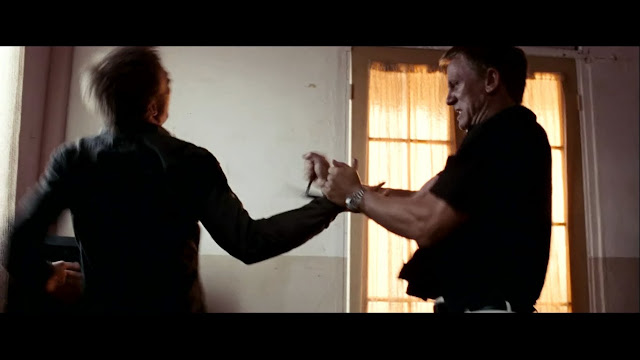 When he finally takes the knife away and uses it to kill his enemy, it is not in any sense typical. He does not stab his opponent in the neck or heart, he jams the blade into his thigh, severing the femoral artery and watches and holds his enemy as he bleeds out quickly.

Another harsh moment in the life of a spy.


Giancarlo Giannini returns as the French spy master Rene Mathis. After being suspected in "Casino Royale" of selling Bond out, Mathis was roughly taken into custody and questioned. His dignity and affection for Bond evaporate. Bond needs his assistence and brings him back into the fold for this story. 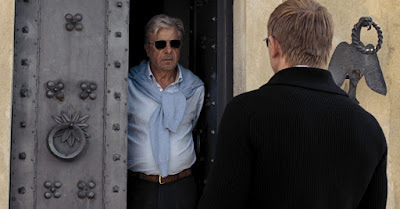 Mathis is the only companion to ever see Bond drunk, and he listens to the bitter tale of woe and advises James as a friend in spite of his temporary animus. This scene takes place in a Virgin Atlantic Skybar.

The French intelligence agent has contacts in the South American country they land in, but they turn out to be unreliable. Mathis finishes his too short tour of duty in the franchise, in an ignominious way. The film makers should have planned a better end for him. 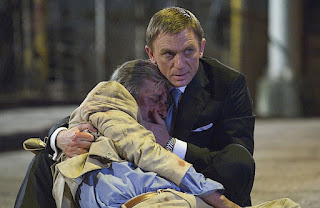 
The best scene in the film involves Bond flushing out the members of the secret group "Quantum" while they take a meeting during a performance of Tosca. 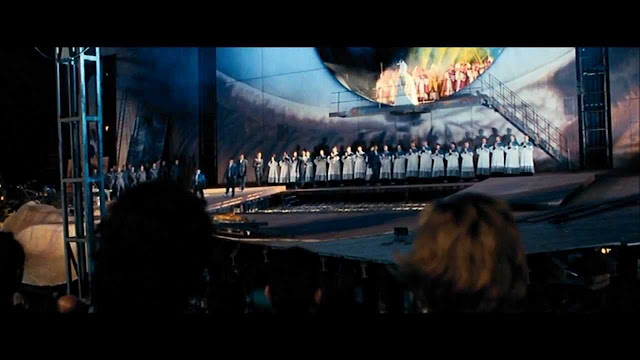 An innovative set and the Bregrenz Culture Center are the backdrop for this innovative trap. Bond has tapped into the meeting via radio and as he listens in to the transactions, he interupts with a smart ass suggestion that the group should meet somewhere more private. When they hear that an outsider has been listening in, several of the rats reveal themselves unintentionally by abandoning what they see as a sinking ship.

As they get up and leave in the middle of the performance, they are easy targets for Bonds camera equipped cell phone. 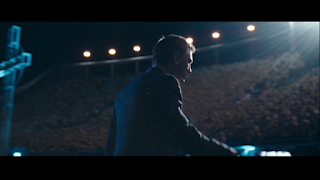 as he points and shoots, the images are shot back to Tanner at MI 6 HQ and the computer there scans faces and starts to make identifications.

Bond encounters the head rat on his way out and Greene sends his killers after Bond.

Of Course we know how it will ultimately turn out.While the performance on stage plays out, Bond gets the best of the body guards, one of whom turns out to be there with a high ranking member of the British political class. And the plot thickens.

James Bond will Return in "Skyfall"
Posted by Richard Kirkham at 7:16 AM

Terrible Bond film, in my opinion I hate films shot with quick edits and jump shots. Gives one a headache.

The opening is a mess, but the film settles down a little bit. I was very disappointed the first time I saw it, but it does get better with each subsequent viewing.