Werewolf films are plentiful but not as scary as they once were. "Twilight" seems to have turned shape shifting human/wolves into domesticated pets.  1981 however, was a landmark year for werewolf based movies. From April to August we got "Wolfen", "An American Werewolf in London" and this subversive genre bender that combined humor and horror before it' more famous counterpart was released in mid summer. "The Howling" is a low budget horror film that used humor to differentiate itself from more traditional drive-in cinema. A clever script and efficient directing and editing make this a film that everyone should see.

Last night I attended a return visit from master horror film maker Joe Dante, to the Egyptian Theater in Hollywood for another program sponsored by the American Cinematique. Just a couple of months ago we were treated to s special presentation of his two "Gremlins" films. Last night focused on one film but two film makers. Joe Dante, the director of "The Howling" and Patrick Macnee, one of the stars of the film. Mr. Macnee passed away at the end of June, and this was a fitting film to feature since it was one of his biggest roles in an American film. (The Cinematique will also be playing "This is Spinal Tap" in the near future.) 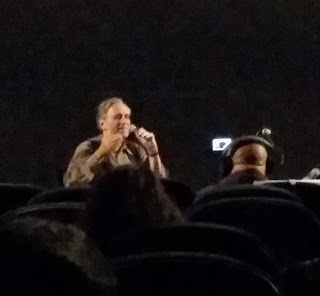 Mr. Dante shared a number of stories about Patrick Macnee, including the fact that he was a nudist, which somehow seems to fit in pretty well with the cult like atmosphere of this film. The budget for the movie was one million dollars. (That is not a mistake, that is a cheap budget for a cheaply made film). Dante revealed that his directors contract was non-union and he received no residuals for performance of the movie. He also acted as an editor and before he was paid, the film company went out of business. So although this is one of his big successes and his first big movie, he has never seen a dime of cash in relationship to it.  As the audience warmed up, a number of questions were asked and most of them were pretty simple: How did you cast Dee Wallace, What was the role of Rick Baker on the Film, how did you work with Pino Donaggio? The Rick Baker question may be the most important one. Baker was scheduled to do the film and had worked on much of the special effects make-up, but he was poached by John Landis for "An American Werewolf in London" and they had a bigger budget. Rob Bottin, was a protege of Bakers and he took over and made the film himself. Robert Picardo, who played Eddie in the film, had to endure a couple of overnight make-up and set design sessions. It's hard to believe but he spent up to a dozen hours in some cases being set up for the transformation sequences.

I'll get back to some of the behind the scenes material in a minute, let's take a couple of minutes to talk about the film itself. With the first shots, we are plunged into the middle of a news story about a serial killer who has contacted a local newswoman who has agreed to meet him. The cops and the newsroom editors are on a radio link, but that's as much back up as she gets. Hollywood in those days was pretty seedy (although according to Joe Dante, it had nothing on Times Square in Manhattan in the 70s). Karen White, the Dee Wallace character, agrees to meet "Eddie" the calling killer, in a porn shop. She is to look for one of the peep show booths marked with a smiley face sticker. In a modern world where emoji are ubiquitous, that might not seem a big deal, but in 1981, it was a little subversive to use the cutesy image as the talisman of a nut job killer. That sticker showed up in three other shots in the film and nearly stamps "LOL" on the screen for us. Karen survives an attack but is suffering from PTSD and can't remember much about what happened. The TV psychologist who assisted in profiling the killer, invites her and her husband to a retreat, known as the Colony, to get some group help and recovery time. Dr. Waggner (a name that is based on the director of the original Wolf Man movie from forty years earlier) is a proponent that people be in touch with their wilder animal sides,although as played by mild mannered and dignified Patrick Macnee, you would not suspect any danger. Of course something is not right at the Colony and all kinds of hell breaks loose. 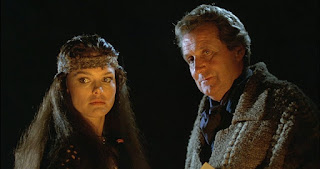 This is where you will get a lot of horror movie and Werewolf based tropes being used to build suspense and then being turned with a quick visual shot or comments. At one point, another couple is watching the original "Wolf Man" on late night TV and just as the issue of how one would become a werewolf comes up, there is Maria Ouspenskayain the background explaining it. Or as a call is being made to compare investigative information, one of the people on the phone has to put down their copy of Ginsburg's "Howl". It doesn't hurt the humor at all that John Carradine, who had a fifty plus year career in Hollywood, also starred in films like The House of Frankenstein" and "The House of Dracula" so he fits in with all the Werewolf mythology like a bouquet of wolf-bane. 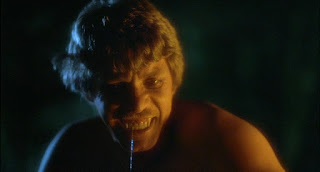 The real stars of the movie though are the special effects make up and the transformation scenes. A combination of prosthetics, air bladders and make up wizardry, produce some of the most authentic and frightening horror effects of the day. When you add in some of the scenes of sensuality and the medical descriptions  in the morgue sequence, you get a great set up but the payoff actually lives up to it. If you watch the trailer above, you will get a splendid preview of the kinds of inventiveness dominate the last third of the picture. Like most films of this time, after a quick opening, it is a slow build to the climax, rather than a series of mini climaxes along the way. (That sentence is also fraught with sensuality).

Dante pointed out last night that there was only one "Werewolf Suit" for the film, and that the attack at the end which seems to feature a dozen werewolves is all an accomplishment of editing. Somehow they got an extra fifty thousand dollars to work on the make-up effects. The studio was so thrilled with the dailies, they would not allow the scenes to be cut down. Although it had been the plan originally to have the transformation completed in one continuous shot, that concept had to be abandoned for cost reasons. It also would have created a story problem with the victims staring at the long transformation. In fact, when a group of kids auditioning for a show on the next stage, were shown the scene, one of them asked why the lady just stood there instead of running?. 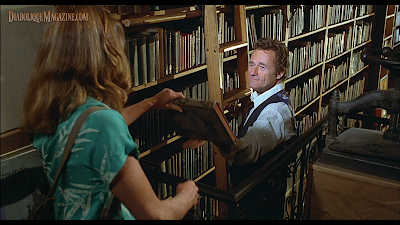 In addition to Robert Picardo, who became a favorite of Joe Dante, B-Horror icon Dick Miller appears in this film as a bookstore owner. His interaction with the investigating journalist is some of the best material in the film. Dante says that originally, Miller was not very enthusiastic because the part was so small, but now thinks of it as his own favorite performance. You can see the future gun counterman from "The Terminator" in the bookstore owner. Dante said that the store they used was originally on Hollywood Blvd. but like most things from the old days, it is long gone. He said they needed to do virtually nothing to set dress the store for the film, it was exactly as it appears in the movie. 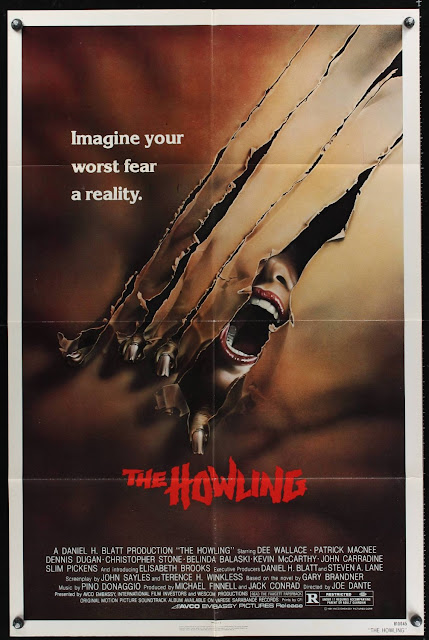 The script was considerably reworked by fellow director John Sayles, who added all of the new age cult material to the movie. That background is one of the things that raises the Howling above several other horror films of the day, it had a perspective connected to the times and it reflected that in the plot. So, a ton of good actors, a creative make up team, a shanghaied screenwriter and a novice director, manage to put together a pretty terrific horror film. It has it's 1980s pedigree all over it, but I would say that is a medal of pride rather than a badge of shame.

Posted by Richard Kirkham at 2:11 PM