If any of you read my blog project last year, you will know that although I think "Amadeus" was the best film of 1984 (or any other year in the 1980s), it was not my favorite film of the year. That honor fell to a subversive little film that grabbed us by the heart and then kicked us in the balls. You can read the exhaustive discussion of "Gremlins" on that site, and if you missed it I hope you will go over and enjoy the nostalgia.

Last night as part of a week long tribute to director Joe Dante, a screening of "Gremlins" was held along with the sequel "Gremlins 2: The New Batch". Dante is one of those guys who came from the Roger Corman school of film making. Make em cheap, fast and be inventive. There are other double features playing this week that if I had the time to see, I would make the return trip to Hollywood. "The 'Burbs/Matinee" and "Innerspace/Explorers" are this weekend and his new film "Burying the Ex" a zombie horror comedy is screening tonight. I would not have forgiven myself though if I had skipped the opportunity to see "Gremlins" on the big screen. 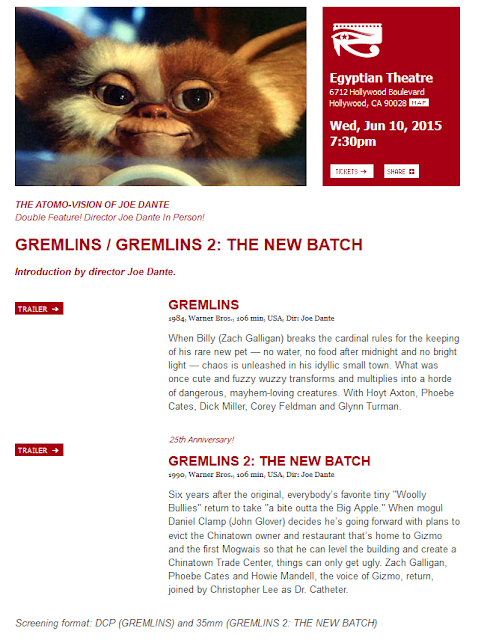 At the Turner Classic Film Festival back in March, I sat right in front of John Milius for a showing of "The Wind and the Lion". Last night, the director of the film I love sat one row in front of me on the other side of the aisle. He did not stay for the whole film but he did do a brief introduction of the two movies, describing the "New Batch" as being more personal since he and his collaborators created it while he worked from Chris Columbus's script for the original. 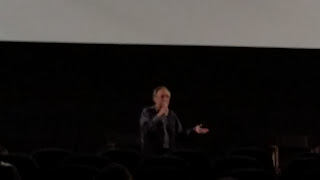 This was actually the second time I sat behind Mr. Dante at a movie screening. In 1988 my wife and I saw the Bruce Willis/James Garner salute to Tom Mix, "Sunset" at the Cinerama Dome. Mr. Dante came in right as the movie started and sat directly in front of us. I don't know that anyone else might have recognized him but at the time, I was a pretty big geek about "Gremlins" and to me it was a cool celebrity sighting.

"The New Batch" is an even more maniacal comedy of destruction and mayhem than the original. The technology was up dated and they had a bigger budget, and as Mr. Dante said last night, Warner Brothers was so happy to be getting a sequel that they pretty much let him do whatever he wanted.  What he did was a parody of his own film. The jokes make reference to moments in the original that often stand out as issues for some fans. As the security guys are dismissing Billy's warning about the creatures, they ask those questions that critical fans might have asked about the original, like what if a piece of food caught between their teeth in a meal before mid-night comes loose after mid-night? Does that trigger the metamorphosis?  Kate starts a story at an odd moment during the film about her tragic memories of a Lincoln's Birthday trauma from her childhood. The movie is filled with those sort of self referential jokes.

John Glover is marvelous as a cross between Donald Trump and Ted Turner, getting the bluster right and in the background being mocked by P.A. announcements and gift shop bric-à-brac . Leonard Maltin basically repeats his criticism of the original as being too violent for it's own good, before being taken down in a moment of gentler violence. Sadly this day we lost Christopher Lee, who appeared in this film as a mad scientist with no conscience but a high level of lawsuit awareness.

The real stars of the movie however are the gremlins themselves, many of which have undergone a genetic transformation as a result of the lab experiments of Lee's mad Dr. Catheter. There are vegetable gremlins and arachnid gremlins and flying gremlins. There is also one that might be deemed by Chris Brown a "Science Experiment" much like he described Mr./Ms. Jenner recently. Tony Randall does the voice of an intellectualized gremlin and makes mayhem seem as if it is a cultural behavior that we should value from this new class of creatures.

While it may be Mr. Dante's choice, it does lack the heart of the first film, and the violent surprises that took our breath away and helped create the PG-13 rating. Gizmo is side lined for much of the sequel and the expressive face that made him the focus of marketing and audience adoration in the first film, gets used much more sparingly in the second.  It is still a wonderful film, my preference is as always for the original.

Posted by Richard Kirkham at 10:16 AM