Ricki and the Flash

This will be brief because there is not much to say about the film. It is not particularly deep, the story goes exactly where you expect it to, and there was not anything outstanding in the way the film is put together. As I said to my companions afterwards, "There is a reason this is playing in August and not November". Normally, Meryl Streep would be a magnet to draw some attention for a film, but she gives one of the least effective performances I've seen her do. She is not bad, but there is nothing special about her work except that she looks like she managed to learn to play some guitar.

The elements of the film that I thought were worthy include Ricki's confrontation with the step-mother of her now adult children. Both Meryl and Audra MacDonald sold this scene with understated fury and resentment. That's about as far as any fireworks there are in the movie. Rick Springfield not only holds his own with Marvelous Meryl, but seems to be more of a real character than her weary and frayed Rock wannabe. There was also some effective lampooning of "Whole Foods" market and weddings planned by environmental citizens. Both subject provided a couple of chuckles in the film.

Kevin Kline is largely wasted as Ricki's ex husband. His character comes across as ineffectual and mostly there to make the phone call that brings Ricki back to the family she is estranged from. Mamie Gummer looks like she could be Meryl's daughter (oh wait, she is, good casting), she should have had a lot more to do in the story since her character is the principle engine that drives the premise of family reunion. She has one scene where she is a complete bitch, and then two scenes where she is silently a needy child again. Because the story is so conventional, she has nowhere to go.

The music in the film is fine. It largely plays to the older audience that the movie seems to be targeted at. There are a lot of stage performance sequences and they sound competent. Rick Springfield and the other guys are professional musicians so that makes sense. Ricki never made the big time, but you can see that she loves the music. I'm not sure why it was necessary to have everyone at the weddding climax of the film act as if she had a social disease. The awkwardness that some of the scenes create is artificial because the extras and the rest of the cast are directed to be dumbfounded by her presence and actions, and we can't tell why they would feel that way. 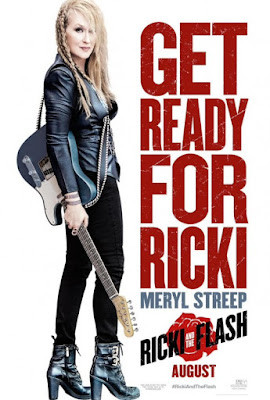 You can tell that there was just not as much here as there ought to be by looking at the lazy poster. Photoshopped Meryl and a tagline that tells you almost nothing.This is a very average movie that is not embarrassing but not something you would ever want to see a second time. I did not dislike it as much as I remained mostly indifferent to it. The screenwriter Diablo Cody did give us a couple of good lines. I liked the philosophy that it's not your kids job to love you, it's your job to love your kids. Had there been a little bit more of the family dynamic and a little bit less concert footage, the film would be better, but still not a great movie, just one that would be more worthy.

Posted by Richard Kirkham at 5:27 PM

I have to say, this is actually more positive than I expected a review of this movie to be. I saw something about this a couple of weeks ago and couldn't be bothered to even find out what it was about.

I expected a lot worse than "Meh."

Meh is pretty harsh for a Meryl Streep film made by Johnathan Demme. It's a shaky Meh, how bout that?

Hmm good to know this movie is exactly what I expected it to be. I'll just save it for a rainy sunday once it comes out on DVD.

Sorry I've been away for so long. Much needed vegetation time after graduation. But I finally got around to see AntMan (I'll leave the comment on that on the proper post). And creating my blog. Just got the first post up. Take a look, if you like.

Glad to hear from you. Wish the movie was better.