I may need to see a doctor or a dentist next week. My mouth and jaw are sore from smiling so much this morning, I'm not sure if I need a pain killer or another injection of Muppet hysteria to make my brain start functioning normally again. I can't say that this movie will win over any non-Muppet converts, but if you are among the initiated in the ways of Kermit, Piggy and the rest of the gang, you too will likely find that the smile you wear for the rest of the day is a pleasant penance to pay for the nearly two hours of felt and foam pleasure.

Let me say that I hope this will be a two or three year repeat event for the rest of my life. Like James Bond, a new Muppet film is something that I will always look forward to. The characters always entertain me and if the movie is put together with some thought, it should be a memorable experience. "Muppets Most Wanted" lives up to my expectations and it will be a film that any fan can return to and enjoy from almost any point in the run time. The story is an almost immediate follow up to the rebooted version of the Muppets from 2011. The character of Walter is now just another one of the cast and the focus is on the whole crew of Muppets with special attention to Kermit. His resemblance to the most dangerous frog alive, the number one criminal right above the "Lemur", is what propels the story. "Constantine" is a vaguely Eastern European amphibian, locked up in a Russian gulag, who makes good his escape and manages to replace Kermit in the Muppet Troop as Kermit is banished to the Siberian prison that held the criminal. It's sort of like "The Prince and the Pauper" or "The Prisoner of Zenda" only with frogs.

The master criminal is going to use the Muppet Show as cover for a series of crimes aimed at gaining access to the crown jewels. This means that we will have several bits that harken to the original Muppet Show. There are guest stars dancing with Muppets and Piggy trying to hog the spotlight and Gonzo with another weird act he is trying out on the road. I would have been perfectly happy with those moments but we get some other elaborate productions also. There are plenty of singing and dancing guest stars and Muppets to go around the world a couple of times. As the crimes are being investigated, a mismatched pair of vaguely French Interpol agent and Sam The Eagle from the CIA pursue the trail of the criminals and try to break the case. Meanwhile, Kermit plots escape and survival in the Siberian Gulag he has been cast in.

The movie features eight original songs by Bret McKenzie, one half of "Flight of the Concords", and they are all a kick. "We're Doing a Sequel" is self mocking and enticing at the same time. The Muppets are joined in singing by a couple of guests, but the focus is clearly on them and their desire to figure out what it is that they are doing next. "I'm Number One" is a status defining character piece that uses the amusing Ricky Gervais as the straight man to the nefarious Constantine. The esteem crushing lyrics will go a long way in making sense of a twist payoff that is silly and memorable and involves the dumbest costume for a master criminal this side of the sixties Batman TV show. 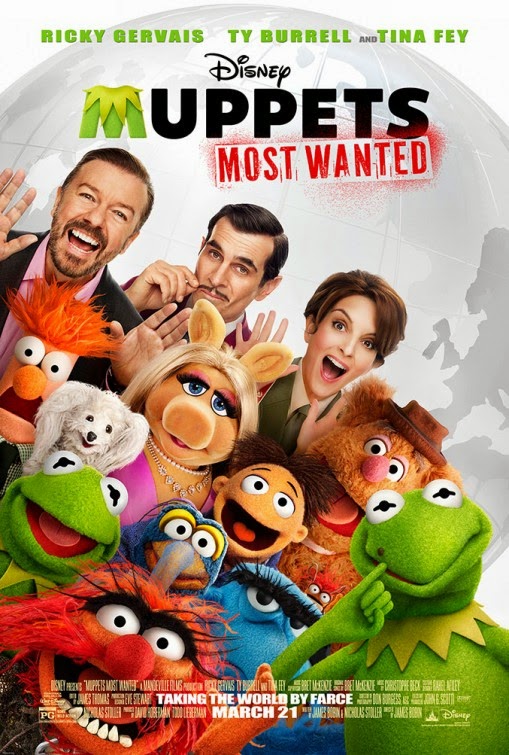 All of the non-Muppet stars in the movie get moments to shine, but many could use a little more screen time. After seeing some clever jokey TV promos featuring Danny Trejo, I could have used a couple more scenes with that craggy faced, tattooed treasure. Tina Fey is coy and tough at the same time as the Russian officer in charge of containing the prisoners in Siberia. She gets carried away just enough during rehearsals for the prisoner review that we can accept the crush she seems to have on our main hero. Ty Burrell is pleasingly goofy as the E.U. weenie who gives we Americans something to laugh at in the European settings. There are cute little surprises in the background casting and several big stars get into the movie for just seconds because it looks like they like the Muppets as well as we do. If you never find the Muppet characters to your liking, I'm sorry for you, and this movie is something you can stay well away from. If you love the Muppets like I do, then this is the most sensational, inspirational,celebrational, muppetational, film you are going to see this year. You should love it.

Posted by Richard Kirkham at 6:08 PM