When the original Zack Snyder version of 300 was released seven years ago, we got a fresh approach to making a graphic novel into a movie. The combination of animation, CGI, background art and live action was intriguing and visually stunning to look at.  Since that time there have been other films that have aped that look, including new works by director Snyder himself. While they have had varying degrees of success, it is safe to say that "300" itself still stands as the model for this vision. Now there is a sequel/prequel/simultaneous story told using the same techniques and while not directed by Snyder, the screenplay is co-written by him and co-produced by him and it perpetuates the franchise pretty well even if it is not as strikingly original as it once was.

I should be ashamed that I do not know my Greek history well enough to pick out all the enhancements, modifications and outright fabrications that this story must give birth to. I am wise enough though to know that you should never let a movie be your source of historical knowledge. To do so would lead you to believe that Abraham Lincoln killed vampires prior to freeing the slaves. There is enough of an historical tapestry to make this movie interesting without having to make any of it credible. Themistocles as historical political and military leader clearly was instrumental in the Greek repulsion of the Persian forces. The visual of him in this film involves the usual chiseled good looks that all the soldiers had in the original film.  Artemisia is another historical figure that is blended into the story and gives us a terrific antagonist in the form of Eva Green. It seems unlikely that Themistocles and Artemisia met on board her ship and conducted a sex exchange as violent as most of the battles depicted in the movie, but who am I to complain when the film makers manage to give us lusty images of the two of them engaged in violent naked conflict.

This movie is all about the bloody battles and staging them with gleeful mayhem galore. There was more CGI blood in this film than I have ever encountered before and it actually looked pretty good. I went cheap and skipped the 3D version and I'm a little sad for that because I could see the manipulative uses of swords and blood splatter and spears and arrows, and it made me want to see that coming off the screen into my lap. Where "300" focused on the Spartans, this film takes in all of Greece and manages to make the Athenians look pretty bad ass on their own. Most of the battles fought in this film take place on sea going vessels laden with slaves and fighting men. The cleverness of the Greeks in war strategy is emphasized and there are some smart tactics similar to the lesson that  King Leonidas learned and used in the original story. There was plenty here to exploit for random violence and chaotic throat slitting. The political intrigue is told in an aggrandized style that echos from the previous film as well. Never speak when you can shout, all speeches must be aggravatingly inspiring and when visual story telling can't fill in the blanks, rely on breathy narration from secondary characters.

None of this is to suggest that the movie is not worthwhile. It is in fact a swell piece of pulp entertainment that plays to the blood-lust of the audience. Some story points make seem repetitive but how many times can you watch a dismemberment and not begin to think this looks familiar?  If that is the kind of thing that brings you to a movie like this, then you will be very satisfied because all of it is staged well and easy to see and enjoy. Instead of the hyperkenetic, shakycam shooting you see in most action films, the visual images here are carefully planned and shot with an eye for lingering death and anticipatory swordplay. You can follow what is happening and enjoy it in slow motion on a regular basis. I had my doubts about the viability of a sequel but clearly there is plenty of historical story to share and another hero envisioned on screen is fine. Actor Sullivan Stapleton is fine but he lacks the charisma of Gerard Butler. After getting an elaborate backstory, Xerxes is placed on the sidelines for most of the tale, and his godlike pontification is not really likely to elevate the movie the same way Butler's ferocity did. 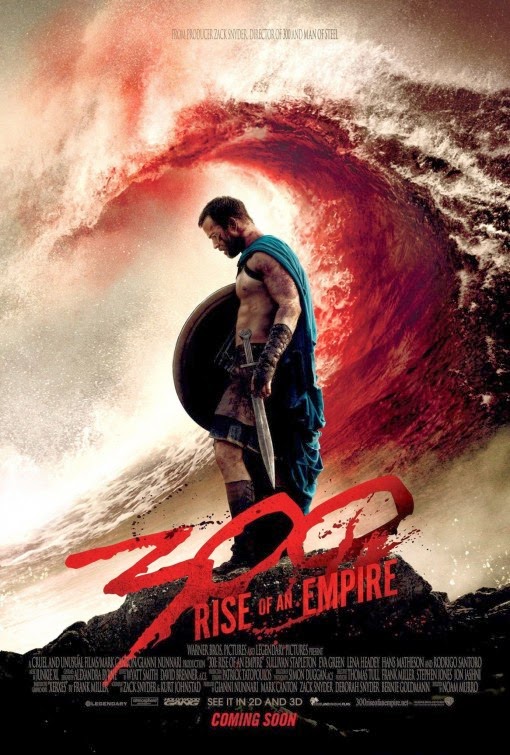 So in summary, it is a worthy followup to "300". There is nothing that will harm the memory of the original film and the addition of Green makes the movie more appealing than I originally thought it would be. Anyone who is interested at all in the movie will find something to meet their expectations, but if your only expectation is battle, blood, and bromance, then this is a movie that you can fully embrace.
Posted by Richard Kirkham at 2:24 PM