This generation now has the equivalent of an "Empire Strikes Back" moment. The second film in a series, matches and in many ways exceeds the original and it ends in a cliffhanger that will leave the audience breathless in waiting for the next episode. Jennifer Lawrence is a rising star with an Academy Award in her back pocket and a hugely successful movie franchise to back it up. The movie is as creatively successful as it will be financially.

I'm still trying to catch up with the tsunami of movies that we saw last Sunday. The third film we saw was the biggest hit of the weekend and may turn out to be the biggest film of the year. It helps immensely that the movie is actually very good. It is far superior to the "Iron Man" sequels that it will be competing with for top box office honors. This is a young adult series that has not been afraid to tackle some serious issues. From my point of view there is a dangerous parallel between the fascist government in the story and the times we live in. People inside "the Capitol" (read "the Beltway") see the hinterlands as a source of resources for their own power and status. This is so much like the relationship of the current government to the rest of the country it should come with a political disclaimer. "The Hunger Games" are designed to remind the rebellious that there is a cost to challenging government authority. All the pomp and circumstance is made to be a distraction from the lack of jobs, freedom and hope that everyone is saddled with.

The second film in the series has clearly had an upgrade in budget and scale. The vision of the Capitol city and of the surrounding Districts is much clearer in this film. There is a strong sense of the technology and how it is integrated into the power structures. When the storm troopers arrive in District 12, the whole country gets a brief look at the clash that Katniss has provoked among the proles that have had their necks stood on for 75 years.This is a world ripe for revolt and the snakelike President Snow, recognizes it. His open animosity toward the winners of the games, makes it easier for the rebels to maneuver the star of the games into a position as a figurehead. The politics of the film are as important as the pyrotechnics of the games. Then, you add the games on top of this and the movie becomes entertaining as well as thoughtful. The ability to visualize the challenges of the new games, with their new rules and manner of selecting the tributes, is very praiseworthy. We get a little more insight into the motives of all the districts and we meet the contestants in more detail this time. The fact that many of them are old, middle aged, and still able to find a reason or a way to fight is pretty encouraging. It is another thing that moves this from being a one note love story for tweens into a full fledged science fiction epic.

Katniss is more conflicted in this story. She knows that the games are a death sentence meant for her and the only thing she wants to assure is that her counterpart Peeta survives. One big difference in these games is that the arena is much more focused on eliminating the competitors than they are interested in eliminating each other.  The alliances feel different this time and it turns out there is a reason why. It is not clear how all of the twists are managed but they seem to be leading to a very serious story conclusion that is not light hearted at all. There are a few moments of humor and some moments that provoke sadness but when the end comes, it will arrive with a sharp intake of air from viewers who have not read the books. This is another comparable element to the second "Star Wars" film, things take a turn and they don't always turn out well. 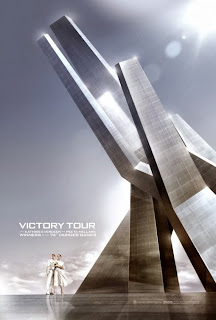 In reading the books, they declined in my opinion, starting with the strongest and devolving to a climax that felt unsatisfying. I get the feeling that the films are reversing that trend. There is hope that the weak finale of the story can be turned into a more admirable outcome in the films. I don't expect the story will change but it feels like the story telling is much more controlled and thoughtful. I expect, based on what I have seen in this film, that the plot will be more meaningful and the characters more interesting than they were in the book. I guess I will have to save that pronouncement until we get those last films, but "The Hunger Games: Catching Fire", has me hoping that the film makers can pull it off.

Posted by Richard Kirkham at 10:51 PM