This has been the most talked about film of the year. It is certainly deserving of acclaim and it will be awarded many accolades before the Awards season is done. I have nothing but praise for the film but I do think the hype needs to be tempered a bit.  While it's depiction of slavery is accurately cruel and devastating, I'm not sure that it is as new or distinctive as many have said. Much of what transpires reminded me of other films that displayed the shame that this type of bondage represented.

This is the first film from director Steve McQueen that I have seen. I can't say for certain what his style is yet, but based on this film it appears to be direct and subdued. He lets the actors fill the screen with their performances and is not playing with the camera or lighting the scene in ways that seem to be self conscious. There was only one shot in the movie that I thought drew attention to itself rather than the story. That was a lingering close up on the star's face, while there was no dialogue. It was noticeable but the nice thing about it is that the shot focuses on the actor rather than the direction and that makes it less problematic.

It is not necessary to recap the story for the most part, after all the title tells you what is coming and that there is a resolution.  While there is clearly a plot/history that is being followed, the real strength of the film is in showing the everyday hopelessness faced by human beings treated as property. There are incidents that are heart-wrenching and moments of  cruelty that are unfathomable to our modern senses. The film does a nice job showing how the just and self respecting tried to live with the institution, even as the miserable and the cruel were exploiting and surviving respectively. Chiwetel Ejiofor is the star and he gives a solid performance as Solomon Northup, a free man, kidnapped into the peculiar institution. Michael Fassbender may have trouble getting work in the future if people associate him too much with the part of the cruel slave owner Epps. His character is unpredictably unbalanced. He carries the air of a privileged aristocrat and the self loathing of a man debased by the slave holders power over others. Ejiofor has to play his part subtley because his character must be subdued in order to survive, but Fassbender gets to let it rip as he fights his own depravity, gives in to it and then punishes others for his weaknesses.

The other great performance in the film is from newcomer Lupita Nyong'o, as a young woman tortured for being the thing that the master most desires and hates himself for wanting. She has the heaviest physical burden as a performer, she is beaten, raped, insulted and deprived of her family. All of that allows for a wide range of acting techniques to be displayed by the actress in her role as Patsey. She is not the focus of the story and the failure to have any resolution to her plight, while it may be honest, is also unsatisfying in the long run. In fact, the wrap up to the story seems to happen very quickly and it leaves several points dangling. On the other hand, the resolution for Solomon is quite satisfactory and well earned by the film makers, even if they are just following the history of the actual man's life. 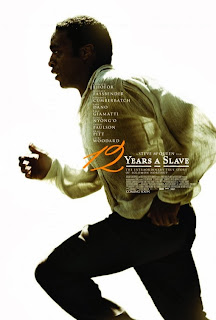 The film is excellent and there is good reason for it to be praised, but some of the on-line hype may have influenced my perception a bit. I was not floored in the same way that others have been. It is an emotional story and I did respond to it, but it exists within a well worn path of similar stories. I suspect the passage of time has diminished some peoples memories of "Roots" which was equally devastating and almost as visually brutal as this film. Last year's "Django Unchained", while a revisionist western action flick, also addressed some of the loathsome qualities of slavery. The themes are not fresh but the story is compelling and I would be glad to recommend this film to anyone, just don't expect the second coming, it is not miraculous.