Regular readers of my posts know that I am a marshmallow and a sentimentalist. If a film moves me and leaves me feeling better and happy after seeing it, it will certainly get my approval. This is a film that did both big time. It comes from writer/director Richard Curtis who created one of my favorite Christmas films of all time "Love Actually". There is a definite style and pace to both films that mark them as unmistakably from the same creative team. Cynics need not spend their time with the movie, although if there is aheart in there somewhere, this story should be able to reach at least part of it.

The romantic fantasy here involves an interesting conceit. The men in this particular family can travel back in time to any point in their life. The rules are as they say in Great Britain, a little dodgy, so you just have to accept the premise as it unfolds. Much like "Groundhog Day" this film expores what it means to strive for perfection in a relationship. Unlike the sour character Phil played by Bill Murray, the hero of this tale is not really pursuing redemption. Tim, played by Domhnall Gleeson, is a likable character who just seems to be missing on opportunities for a romantic relationship. He uses his power much like Murray did, to try and manage a successful relationship with the woman of his dreams. The point of the story is that ultimately, our dreams really are what our lives are all about.

His gift is not ever explained in any scientific way, and the conundrums of time travel come up in convenient spots for the story and are ignored in inconvenient spots. Tim's Dad is played by the continually delightful Bill Nighy. He gets some great moments in the film, like when he first reveals the secret to his son on the boys 21st birthday, but especially wonderful are the commentaries he engages in while playing table tennis with his son. The most sentimental moment is the toast he offers at Tim's wedding. If you can keep a dry eye through that, then there is a black hole where your heart ought to be.

Tim has an interesting arc, since he moves forward and backwards in time. He has to make some tough choices at times and the story tries to emphasize that the heart will guide you correctly more oftenn than the head. He manages to meet a woman who is perfect for him, and he does so without the use of his secret at first. When he changes the outcome of a friends destiny, it also changes his and he has to then use his gift to try and restore the magic that he almost lost. Rachel McAdams plays his love interest and she manages to look plainly beautiful instead of stunningly beautiful. The difference between those two types of beauty matters as Tim discovers in the course of the film. All the little things in his life matter and that is the theme the movie develops very effectively. 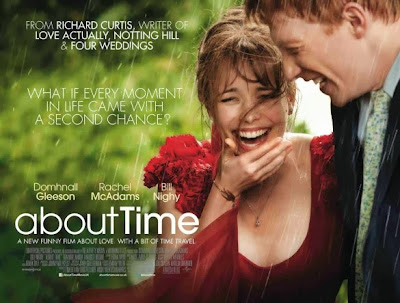 The final moments of the movie were very reminiscent of "Love Actually". There is a charming song in the background, some sweet narrative from our main character and images that will evoke both sadness and happiness simultaneously.  This is a movie that will certainly rank high on my end of the year list. It did everything I want a movie to do, I laughed, I cried, and I nervously held my breath that the right outcome would arrive for the characters created in the script. A thoroughly satisfying movie experience for romantics everywhere.