Let me give appropriate context before you judge me too harshly. If I had seen any of the "Fast and Furious" movies other than the first one, I would have gone to that movie today instead of this. Something about "Epic" just did not look appealing to me, and I love animated features. I probably would have enjoyed seeing "Star Trek Into Darkness" again, but I have been twice. My weak reaction to "Iron Man 3" kept me out of that theater. Friday night we re-watched the original "Hangover" and laughed almost as much as we did four years ago. So you now know why, even after the extreme disappointment of the the second "Hangover" film, and the terrible word of mouth on this one, we went anyway. The trailer with the giraffe was encouraging, we had no new films in the local theaters and I needed to be out. So there, shoot me.

Here is my faint praise for this film, "it's not as bad as I thought it was going to be." The three most entertaining parts were two scenes at the beginning and the final credit stinger. I guess I'm a bad person, the giraffe bit worked for me. In part because it is played as a cartoon and the CGI is so obvious that it can't really be too disturbing. It is the biggest laugh in the movie, it is mostly in the trailer, and you can see the joke coming from a mile away. If you are sick enough to still watch, then you will be amused. It will take almost two more hours before you are similarly entertained by a fresh idea in the movie. This is clearly a money grab and while a bit cynical, it only hurts the willing victims. I thought my chances of being slightly entertained by this were greater than my chance of winning the "Powerball" lottery last week. So I saved seven bucks from buying quick pick numbers and spent it on a matinee. It was a better buy in the long run but not very rewarding none the less.

Ken Jeong as Mr. Chow is amusing in small doses, here the dosage seemed to be horse pill sized. Zack Galifinakis went from being an weirdly charming oddball character in the original film, to a loathsome excuse for a human being whom we are supposed to laugh at. Supporting/ensemble characters should remain that way. "Cars 2" is a mess because the focus is on Mater, and "The Hangover III" suffers because the two oddest characters are put front and center of the story. Instead of ordinary guys coping with extraordinary events that they can't remember, we get a caper film that depends on us laughing at a murdering criminal and a psychotic mess who is off his medications. There are some gags along the way that might have worked in another movie with a different set of characters and a different premise, but they mostly fall flat during this two hours of time spent looking at things on the screen. The things on the screen are not as boring as some movies I've witnessed, but they sure are not as amusingly entertaining as the makers of this movie want them to be. 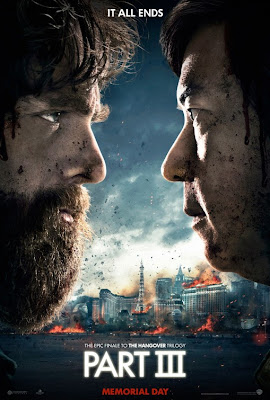 I have already spent more time writing about this than I wanted. I almost posted a single word review: "Don't". I did want to defend myself a little (yeah I know I encourage the studios to keep doing this stuff by buying a ticket, but I also give food to stray animals and indulge crazy people in conversation, it's a personal failing). The world will be a little better knowing that we are done with these films, and you will only be a little bit worse if you go and see this. I suggest you find something else, but I won't judge you if you feel you must add this to your viewing history. I just want you to return the favor.

Posted by Richard Kirkham at 1:42 PM

LOL at the thought of a single word review. I've considered such things. In fact, my review for "Zookeeper" reads "Yeah right, I'd rather get poked in the eye with a stick" LOL

This lukewarm sentence sums it all up nicely. ". The things on the screen are not as boring as some movies I've witnessed, but they sure are not as amusingly entertaining as the makers of this movie want them to be."

Heh, I'd love to see that one word review! Though what you've got instead is good, too, and I pretty much agree for the most part. Far too much time spent forcing support characters down our throats, while meanwhile the "straight guy" leads don't seem interested at all. But still, as you said, it wasn't as bad as I was expecting, but it still wasn't any good. :P

Thanks Dan, I saw your score but I went anyway. I need to break my addiction to good concepts dragged out.

Chris, keep coming by, you may get that one word review if they screw up Man of Steel or Kick Ads 2.

I am surprised you like the giraffe bit. The consequences of it are the best part, "I am 42!" But the over-the-top / everyone knows what is going to happen setup of the event was far too painful to be praiseworthy. Shame on all involved with The Hangover Part III. The best part of it may be its low box office take will turn off any thoughts of a Part IV.