Animated films have always been a favorite, but they need to have a solid story to hold my interest. Years ago, "Toy Story" took inanimate objects and brought them to life, now Disney returns to the same vein to strike it rich again. This time providing an unseen life and environment for video game characters. These heroes and bad guys work all day in the salt mines of a video game in an arcade, and then after closing time have their own lives to lead. Apparently however, they are unable to slip the boundaries of their character's role in the game as easily as they slip out of the games to mingle with each other.

"Wreck it Ralph" is the hero of our story but not of his game. The theme behind the film is as old as "the Wizard of Oz", which is "there's no place like home". Throw in a little empowerment and an evil background character and you have the makings of a pretty standard kids film. As the story unfolds, we meet a lot of characters that are fun in their games but not necessarily great to hang out with. Ralph seems to be one of the only self aware characters, despite attending a support group for villains in video games. It is a little unclear why they all don't see the issues Ralph is facing since they face much the same dilemma. "Fix it Felix", the hero in the game that Ralph has become discontented with, actually appears to be a good guy who simply can't bend to the feelings of Ralph's character as easily as he does to those other characters in their game. The antipathy of the characters in his own game lead Ralph to seek a solution elsewhere, although he really just wants to be part of the gang.

I was never a gamer, either on arcade machines or home consoles. I may have played a few games of Pac-Man or Asteroids, but not enough to get good or to care whether I got good at them. Kids who grew up with this stuff will probably enjoy this film quite a bit since it uses many identifiable avatars from classic style arcade games. The two main games featured in the story however, appear to be original creations of the screenwriters. The "Wreck it Ralph" game looks like a variation of Super Mario Brothers, and the graphics are designed in a clever way to suggest that it is an older game. "Sugar Rush", the location of most of the action in the story, is a racing game with a sweet theme and cute little avatars straight from the "Hello Kitty" school of design. There is a combat game that briefly figures in the action, but the main plot centers around the activity in "Sugar Rush".

The graphic design and art work in the "Sugar Rush" game are fun to look at. The characters seem familiar even though the game does not really exist. The racing cars driven by players in the game are constructed in a separate level of the game and feature some wild candy themes accessories. Trapped inside of the game, is a character that needs to be released from a "cyber" limbo and this is where the story works the best. Ralph, starts off as a morose, somewhat self centered character and travels a path that allows him to empathize with others. He also turns out to be no dummy, so he quickly figures out that something is wrong in this world. As he discovers the true programming glitch in the game, there are additional points of jeopardy and plot development. The strings all come together almost as well as one of the Pixar films. The weakness is the motivation of the villain and the credibility of the character dynamics. Kids may not care that the rules don't always make sense, but they do want to care about the characters and be able to relate to them. For the most part, they will. 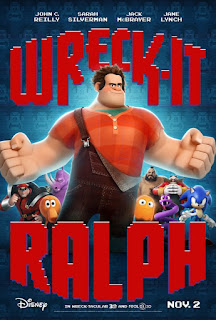 The look of the movie is excellent and there are some stand out bits of humor. Kids will laugh at the Dooty jokes, and adults will not be able to eat a certain chocolate sandwich cookie again, without a familiar tune from their own childhood ringing in their heads. The sentimentality of the story takes a while to build up and the payoff is pretty sharp. To use a sports metaphor here, it is a home run but not a grand slam. Disney scores with an effective animated film that will satisfy the family audience and make you feel glad you came. It may not be on your list of great animated films, but it is definitely a solid hit.

Posted by Richard Kirkham at 4:54 PM